If you’re a keen PC Gamer, there’s a good chance that you’ve already clocked hundreds of hours playing Defense of the Ancients and League of Legends. If not, then you’re probably wondering just how DotA came to be and how LoL has ran away with the genre to become one of the most popular PC Games out today. Let’s take a look at both how DotA was created, how it got popular and how Riot Games has capitalized on the genre with LoL. 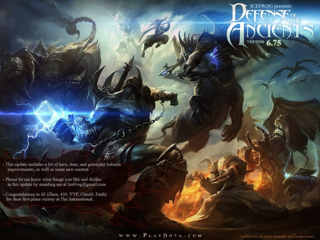 A lot of gamers out there don’t realize this but, DotA wasn’t always its own game. In fact, it started life as a lot of games do these days; as a mod. DotA has also been around a lot longer than many fans realize.

It started life as a mod to the popular Warcraft III: Reign of Chaos game based on the popular StarCraft map, Aeon of Strife. The core gameplay was there right from the beginning and it’s from the gameplay it gained its name. It’s called Defense of the Ancients because that’s essentially what players have to do when playing the game.

DotA pits two teams against each other on the map, with Ancients – heavily fortified structures that the opposing team must destroy – at each end of the map. Teams are given characters to control themselves, as well as AI characters to control, too. You could (and still can) play DotA on any operating system. There are minimum technical requirements needed, but gaming gadgets can always help!

The core gameplay might have been simple but, it was easily suited to competitive online play. It was easy to score and it featured a faster, more accessible pace than most games at the time. Similar to what Call of Duty did for multiplayer on consoles, DotA sped up the pace for PC Gamers. IceFrog had been developing DotA since 2005 and it was built using the World Editor included in Warcraft III.

IceFrog had developed a great mod in DotA but, it became difficult to develop on top of the aging platform; Warcraft III. In 2009, things were about to get a lot better for DotA fans as Valve hired IceFrog in 2009. In 2010, development on DotA 2 had officially begun. With DotA 2 being a direct sequel to the mod that came before it but, a completely standalone game. As a result, IceFrog had more scope and the ability to create the perfect version of their original vision. Not to mention better resources with Valve’s backing.

The second DotA game wasn’t a rushed effort however, and was only released in its final version this summer on July 9th 2013. With micro-transactions supporting the gameplay, it’s even more accessible to new gamers thanks to Steam support and the omission of Warcraft III needed to play. Anybody can pick-up and play DotA 2 with little PC Gaming knowledge but, to master the game is as difficult as it always has been.  But for those nostalgic fans, the original DotA is still maintained and updated regularly.

According to a Forbes article from 2012, LoL is the most played PC Game of all time, in terms of hours played, that is. In 2008, Riot Games announced that the game was in development for both Windows and Mac OS X. The following year, League of Legends officially launched, changing multiplayer on the PC forever. Built in the shadow of the original DotA game, Riot Games steered things in a slightly different direction. However, it kept its familiarity that fans so craved. Building on what had already come before, LoL feels like the same game however, it’s better geared towards organized competition. Many gamers will have only heard of LoL thanks to the increasing amount of attention it’s receiving as an “eSport”.

Much like DotA, teams are pitted against each other on a map, tasked with destroying the opposing team’s structures. These structures are called Nexus’s, with players controlling Champions. There are a massive 116 different Champions to choose from as of October 10th 2013. To destroy a Nexus, teams must work through a series of Turrets – often referred to as Lanes – leading to each Nexus. Along the way, the teams must destroy opposing Champions and Minions – the non-playable characters, which each team has at their disposal.

League of Legends has become so popular thanks to its free-to-play status. As long as you have a decent PC or Laptop with okay graphics power, you can simply download the game and play. For those fans that are really into the game, they can spend real money in-game to improve their Champions. In fact, League of Legends has become a method to make money by competing in organized competition.

Tournament play has helped the game’s popularity immensely, with players having something to prove. It doesn’t matter whether you’re playing online with your friends or heading to another tournament halfway across the globe, everyone can compete with League of Legends. Isn’t that what gaming is all about? Bringing others together to compete? LoL is one of the few games that has successfully tapped into the free-to-play model and revolutionized PC multiplayer in the process.

Many original DotA fans align strictly with the DotA brand, often engaging in online harassment and typical trolling of LOL players. And of course, the same goes for LOL players.

Fortunately, the player base for both games are so vast, there are enough cool-headed players making the community stable.

Looking ahead, Riot Games has accelerated the acceptance and development of eSports than arguably any company to date. Myself, along with millions of other players, tuned in to watch “Worlds” (basically, the Super Bowl equivalent for LOL) on our computers. From the sponsors, support from an NFL kicker, to the game casters and play centers, eSports is quickly becoming streamlined.

Jesse Aaron is a professional blogger with a passion for gaming. He’s also an advocate for 12 Keys Rehab, hoping to help people seeking recovery.