Before I get into my impressions of the iPad Air, let me first relate about myself to put the impression in context. Firstly, I’m not really a tablet person. Have used them, but did not choose to own one myself. Not because I did not see any use for them but rather I did not have a need to justify getting one. Secondly, I don’t use Apple products personally. I do use them professionally though. I have a Macbook Pro for work and just received the iPad Air for a project.

Apple engineers are fantastic in their design. That goes without saying. The iPad Air is truly a beautiful piece of hardware. Sure, the design traits are all too familiar. The curved corners, the aluminium back and the central home button. The magic is that it just feels right. It feels great in the hand, the slimmer bezel does help in making the tablet appear smaller but with the same screen size as the previous generations. It feels light enough to hold with one hand too.

The iPad Air does come preloaded with the latest iOS 7. The revamped iOS interface finally feels to be in unity with the exterior design. Previously I always thought that there was design gap between Apple’s software and hardware. The skeuomorphic older iOS did not exhibit the same principles and direction the hardware design took. The exterior was simple to the extreme, clean and minimal whereas the interior O.S design was more organic, curvy with varied textures and gradients. I think the designs are finally unified and that is the most positive element for me of iOS 7. Feature wise, there isn’t anything that is new or groundbreaking to me.

Specs-wise, The iPad Air has a 64-bit 1.4GHz dual-core processor, 1GB of RAM, and a 9.7-inch 2048 x 1536 pixel screen, a 5-megapixel rear camera and a 1.2-megapixel front camera. The screen is beautiful. Its crystal clear and the colors are vibrant. I am mostly using the iPad for testing and showcasing designs on them – so the quality of the picture has been an important factor. I tested out the camera for testing’s sake and pictures came out pretty well. Nothing that was ‘wow’ worthy but solid good pictures. More than enough for a tablet I say. I do not agree with people who lift their iPads in the air to take pictures. 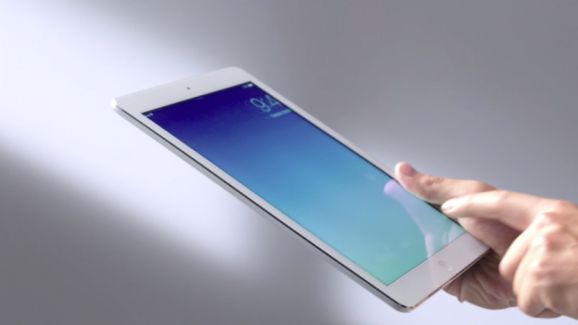 The iPad is fast. Really smooth and fast. Fast not in terms of expecting apps to snap on the moment I open them but rather the instantaneous reaction of the app icon growing to fill the screen and the app starting. There is a certain smoothness in it that I don’t think Android has nailed yet (I have been using Android phones for a few years now). Phones and tablets keep on getting faster but the smoothness and instant reactions are on a whole different class.

The battery life of the iPad has been stellar. I can easily go a good few days, even more than a week with daily testing and usage. Granted, I am not taxing it with heavy gaming or demanding applications and doing so will obviously shorten the life a bit. But for my usage and needs right now – its great. Even with gaming it probably won’t be a problem even on trips and such.

That should wrap up my impressions of the iPad. Once again this is from the perspective of a very specific usage scenario and also a non-tablet owner, non-Apple user. Overall, I am very impressed. Really its a great piece of hardware and if the Apple ecosystem is something you are already invested in – there is no reason not to side for the iPad Air. If you are comparing the iPad vs an Android tablet and deciding what to get – I don’t think its a fair comparison on hardware alone. iPad Air is the best tablet device I used hardware wise. A decision between ecosystems is a decision between ecosystems and not on the hardwares they support. That being said, I am still an Android person – but I would not mind at all on having an iPad as well.