Speculation finally rose to reality when on the 29th of January, AMD took a leap forward into their plans, and broadcasted that their 8-core ARM System-on-chip would commence sampling around March; bringing a true new year welcoming.

The initiator of this series will be the A1100 which will have four or eight cores on the fundaments of ARM’s Cortex- A57 prototype. It will operate at “run at clock” speeds of a minimum of 2GHz and acquiring a 64-bit ARM core, it proves to set a high performance. Equipped with 4 MB of level 2 cache and/or 8 MB of level 3 cache, both caches will be shared throughout all the cores. They will accommodate dual-channel DDR3 or DDR4, with 128GB RAM. The chips will incorporate many connectivity ports like eight PCle 3 lanes, eight SATA 3 ports, and two 10 Gigabit Ethernet ports. They’ll also contain engines for cryptography and compression. With an expected power usage of 25W, the processors will be initiated on the Opteron A-series and built on a 28nm process.

Also known as “Seattle”, the processors are directed at high-density, low-power servers. In addition, AMD is compiling a micro-ATX development kit to support the A1100. This kit will comprise a Fedora-based Linux simulation with development tools, Apache, MySQL, PHP and Java 7 and 8. This software package runs along with the goals of the low power servers for which running web applications is the prime function. 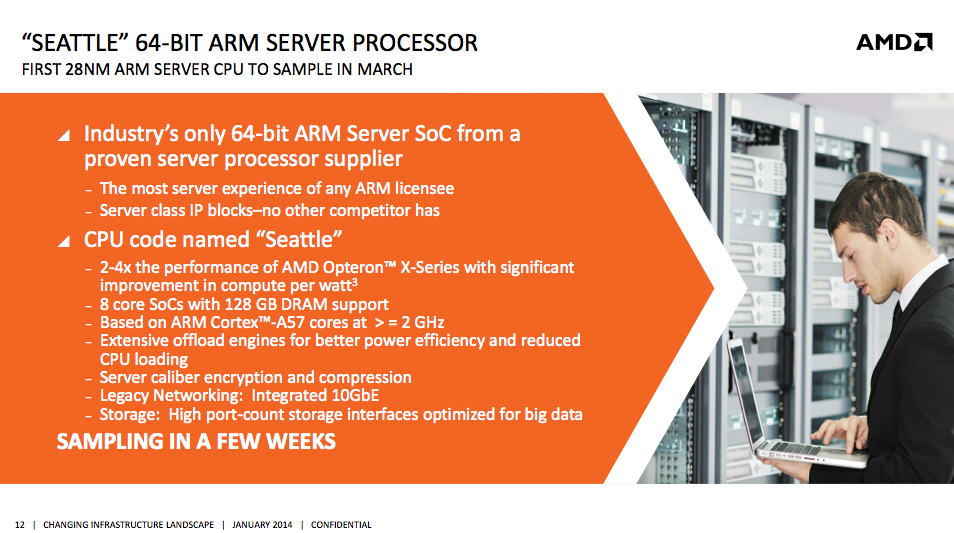 AMD predicts that by 2019, almost 25% of the server market will use ARM processors with prevalent utilization of custom designs in major datacenters, depicting its broad ambitions. While AMD deems that it will lead the ARM server market, its persistent existence is questionable due to the withdrawal of other successful and leading companies in the server market. Will it be able to make its mark in the server universe or will it incur a downfall? That is yet to be seen….

Rubana Shifat studies Economics and is highly interested with diverse economic issues that occur throughout the world. Her other enjoyable pastimes include reading novels, writing and learning about new technological advances.