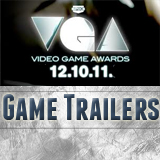 
The reason I wait for the Video Game Awards is mainly for the  trailers. I sat down with a happy face to watch the whole show from Spike TV but thanks to them, I was not able to do so due to my ‘location’. I wonder what secrets were being revealed ? Lucky for those who had the opportunity to watch the trailers live!

The Elder Scrolls V: Skyrim snatched three awards including the Game of the Year! The other two titles they won were the Best RPG and Bethesda Studios (developer of Skyrim) winning the Studio of the Year. Portal 2 won 5 awards under the categories of  Best PC Game, Best Multiplayer Game, Best Performance By A Human Male, Best Performance By A Human Female and Best DLC (downloadable content). Well, as a PC gamer, I wouldn’t have voted for it to be the ‘best’ PC game.

We know the great debate that occurred before the release of both Modern Warfare 3 and Battlefield 3. Fans of MW3 will now get the chance to boast around as they won the Best Shooter Award. Bad luck Battlefield!

Thanks to Game Trailers for uploading all the trailers that were featured in this award show.

Updates about the games will be given in the future posts! Enjoy the videos!