The one thing that android fanboys can enjoy that iOS folks cannot even dream of is the customization of the home screen.

So without further ado, let’s get right in to the list of top 10 launchers for Android! 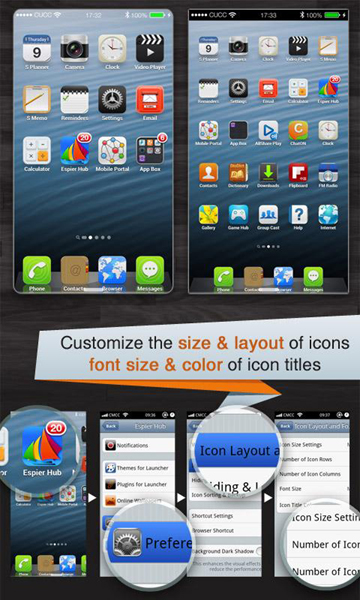 If for some crazy reason you wish to style your phone as an iOS 7 device then look no further than Espier Launcher. This launcher for Android along with its add-ons can transform your entire device to a near complete copy of iOS 7, complete with slide up toggles and notification bar. However, unlike iOS you have the freedom to customize your screens with icon packs, wallpapers etc. The launcher is also versatile in the sense that it can also be used to make other custom themes that are not iOS related. 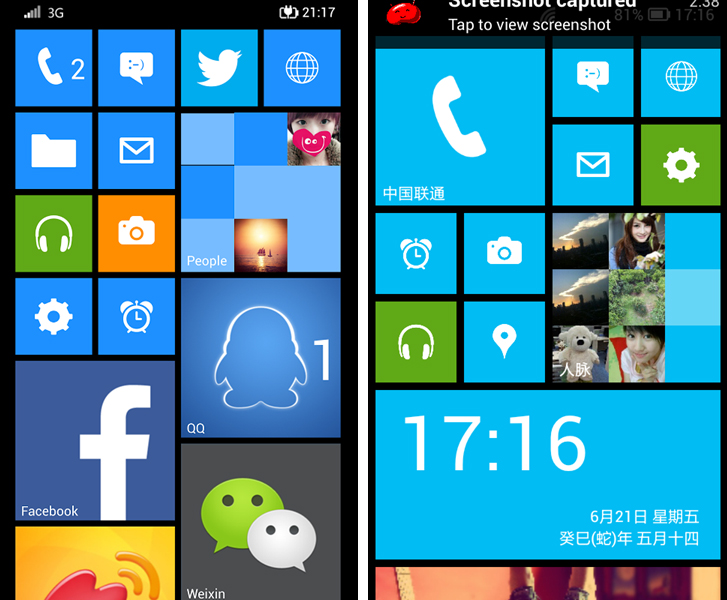 Next we have a launcher that aims to mimic the Windows Phone OS. Personally I believe that this launcher for Android is infact better than windows phone as it has the look of the aforementioned OS along with the functionality and customizability commonly found in the Android ecosystem. The launcher comes packed with features such as live tiles, the windows phone lockscreen and app list as well as the ability to customise the tiles. All in all Launcher 8 provides a more than decent windows phone experience but still needs to be polished more before it can earn a higher rank on this list. 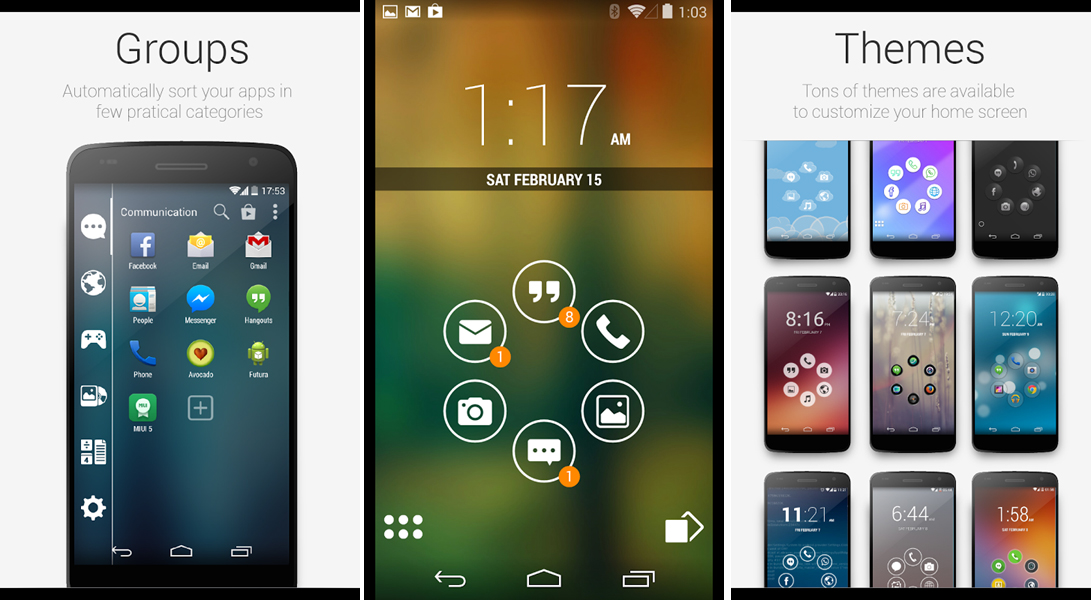 This launcher for Android earned itself quite a bit of hype early on as it emphasized on simplicity and speed of access to apps. There is only one homescreen that simply displays the time along with a ring of pre selected applications. Swipe from left to right and you enter page where all your apps are displayed. Now conveniently, the apps are automatically organised into set categories such as games or internet so that the user can access whatever he/she needs as fast as possible. The categories list itself can be scrolled through with much ease. To cap it all off, the launcher comes pre-loaded with decent wallpapers and has an assortment of themes available for free on the play store. 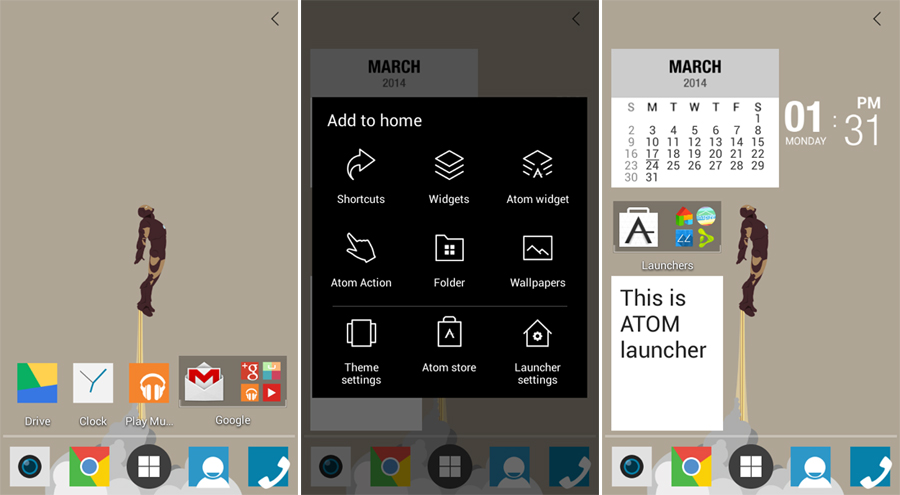 Atom Launcher  provides users with ease of customization along with access to a dedicated store for the launcher. Atom launcher comes with its own set of widgets and also has a companion locker application. This launcher for Android is smooth, responsive and has some nice add-ons that make the user interface a lot more appealing. The launcher takes a minimalistic approach in the sense that it prefers to use single coloured themes over extravagant 3D effects. The colour theme can also be easily changed to suit your taste. Another unique feature to Atom launcher is the ability to make custom themes where each time you unlock your device, a different wallpaper will appear. 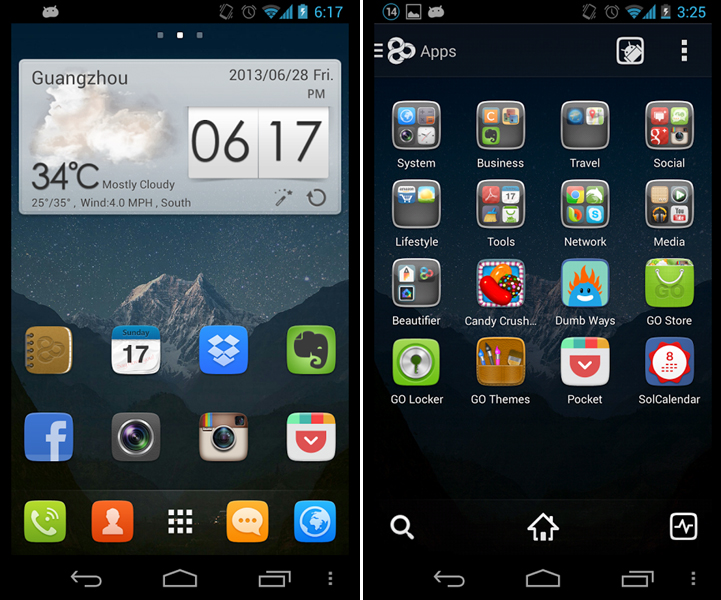 If you have tried your hand at custom launchers for android then chances are you have come across Go Launcher EX. Arguably one of the most popular launchers  available, Go Launcher is characterised by its countless number of available themes and easy to use user interface. This launcher for android is famous mostly because of the sheer number of themes that are available to customize your device. This coupled with Go Launcher’s vast ecosystem of companion apps makes for a very good and unionised launcher experience. 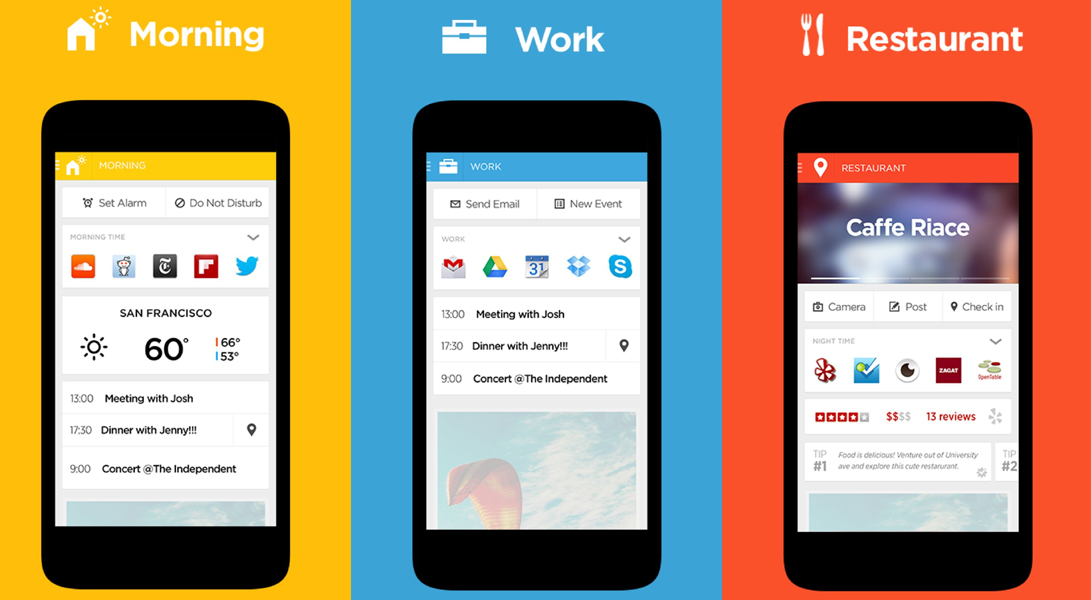 Recently bought by Yahoo, Aviate is another launcher for android that focuses more on simplicity rather than customizability. You have a main home screen that displays your pre selected apps on the bottom and uses the rest of the screen real-estate to display widgets. Simple enough right? But Aviate brings more to the table, the developers don’t just want you to access apps quickly, but they aim to show you what apps you need based on where you are and what you are doing. For example if you are at work, aviate will detect that you are at your workplace and display applications that you have pre set for work such as Any.do or Evernote. Similarly if you change places and are on the move, Aviate automatically changes the contents of your home screen to display whatever apps are best suited for your activities. The app is still in beta mode though and lacks the ability to customize, only recently it was updated so that icon packs could be applied. Still Aviate is an app worth hitting up as it is honestly very useful and intuitive. Might even pack the award of being one of the best Android launchers around. 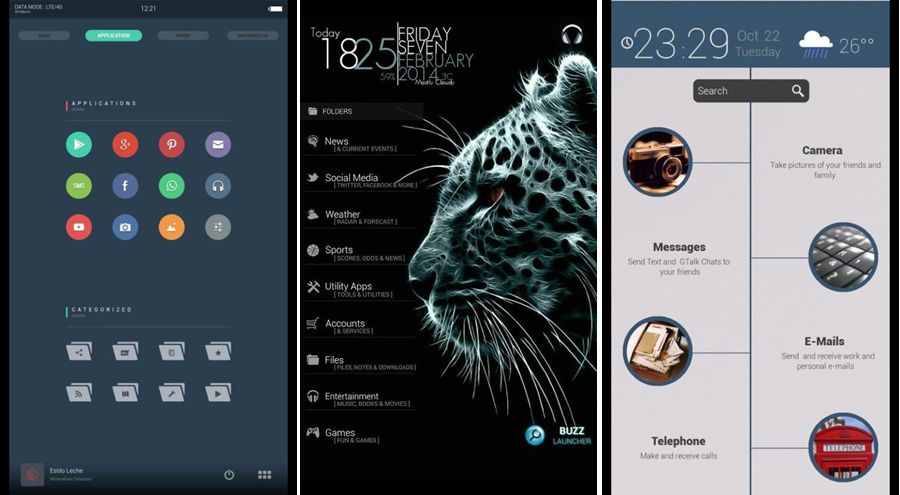 Want unique themes for your phone but are too lazy to make them yourself? Buzz Launcher is the solution to all your problems! Buzz Launcher allows you to create and share your custom themes with people around the globe. If you are too lazy to do the customizing yourself then simply choose from a wide array of cool themes made and shared by other people. What makes Buzz Launcher unique is that no two themes are alike, each one is different. Along with the customization options, you get a pretty good user interface that is nothing extraordinary but certainly is simple and intuitive. In the hindsight, Buzz Launcher may at times feel a bit buggy. 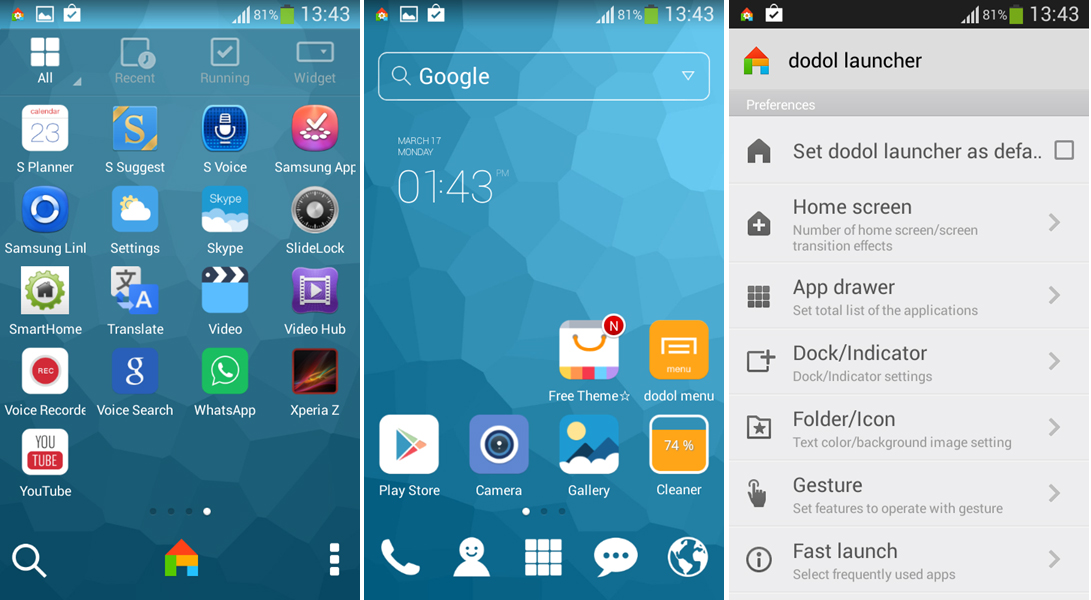 Dodol launcher is cool. Why? Because it comes packing cool features right out of the box. Many launchers out there in the Play Store do not come with good default settings, infact people begin changing things from the moment they open the application. Dodol launcher gives you a neat look right off the bat and comes with some built in perks such as the RAM cleaner which shuts down active background processes with just a tap. The widgets and applications can be easily themed with the help of the theme store, aside from that the colour palette can also be changed accordingly. Dodol launcher also has a quick launch feature in you notifications panel which basically allows users to launch some pre selected apps from there. As expected from a launcher this high up in the list, Dodol is fast, smooth and has few noticeable bugs. As a bonus, Dodol also has a great Locker application. For something not too fancy, Dodol launcher fits the bill of a sleek, customizable launcher that is easy to use and has great features. 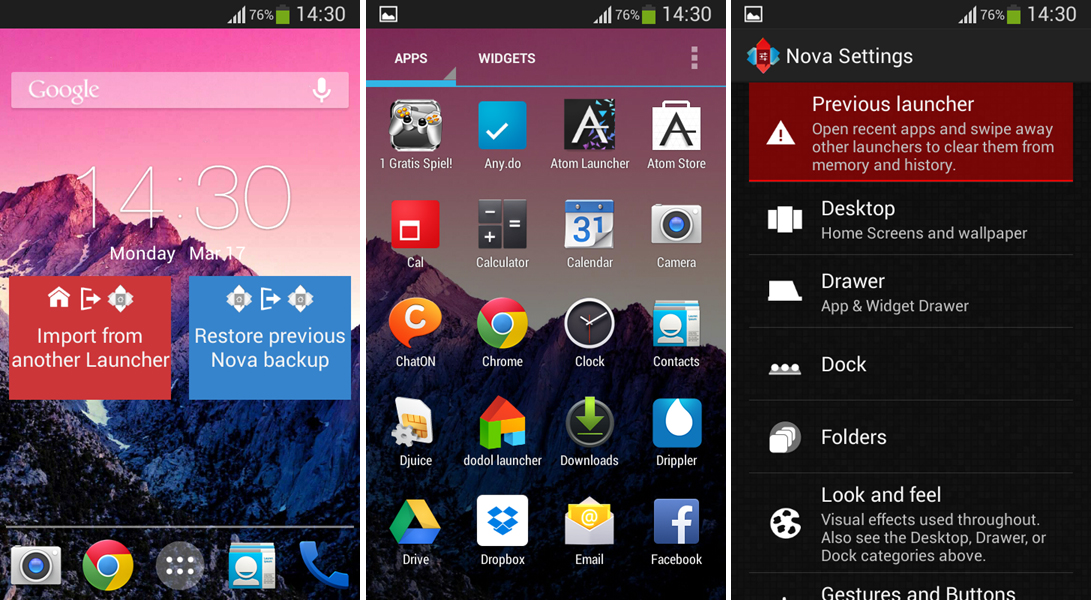 Nova Launcher is one of the most popular and highly rated launchers available in the Google Play store and it is for good reason. Nova Launcher is FAST! Like brilliantly fast, infact there is a setting that allows you to control how fast it works. If there is ever a launcher that wants to top the scales and be the best, than Nova is the guy to beat. It has set the bar very high and stands true to its promise of speed and quality. Nova allows you to customize your homescreens, icons, transition animations etc It offers what any other launcher does but it provides users that with great fluidity and optimization. After using this speed demon, other launchers just feel slow and laggy. But if this IS the launcher to beat, who claimed the #1 spot? 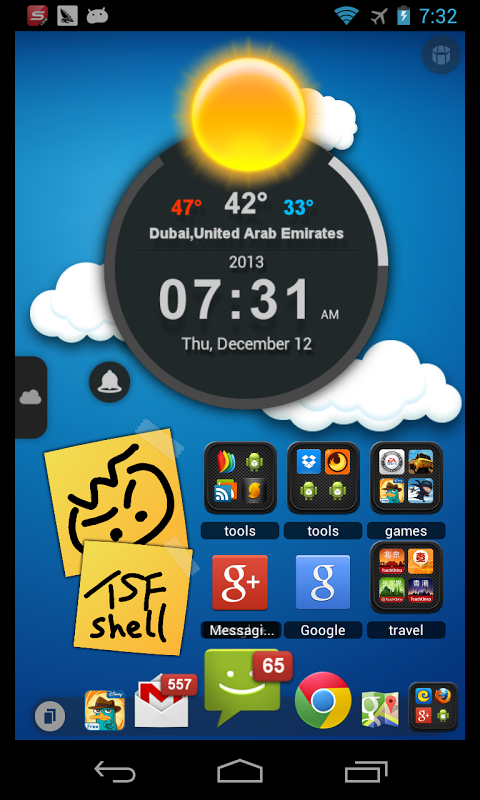 Bottom line, this is hands down the ultimate launcher for android,the humdinger, the creme-de-la-creme. End of story. There is no launcher out there that can rival TSF Shell, it is simply one of the best Android launchers. TSF Shell provides users with the pinnacle of usefulness combined with the coolest effects and freedom of customization. Its sheer number of features cannot be outlined within this small paragraph. TSF Shell has the most creative and interactive user interface I have ever seen, it is polished, fast and just looks too darn good. Its companion widgets are unrivaled, each is three dimensional and has cool animations. Sadly, TSF Shell is NOT free and currently costs $11.46. Still, take my word for it, there is no launcher better than TSF Shell and if you can afford to pay for it, then it will be money well spent.