Once again, we have been bombarded with 4 new budget friendly Walton smartphones that are currently being sold in the show rooms and we here at Techetron have got the privilege to have a look at them. In this post, we’ll give you an overview of how the Primo H3 fares and what are its strenghths and weaknesses. Although the Primo H3 has been released quite a few weeks back,

Consider the Walton Primo H3 as a cousin of the newly released Primo R3 with almost the same specifications but a little downgraded features.

Although the Primo H3 is lighter in the books, the moment I held the Primo H3, it felt like a feather. I may have overstated it but yes, it did feel light compared to the smartphones that I have held so far. Maybe I lost gravity at that moment? Who knows!

Walton Primo H3’s design language strongly resembles that of the Nexus 4’s. Measuring 134.5×67.8×805 mm in dimensions, the smartphone weighs only 143.24g with the battery loaded. Both the volume rocker and the power button is placed on the right while leaving the left side free of buttons.

The whole device is covered with a matte finish which makes it comfortable to hold and might be less prone to scratches and marks unless its forced upon. 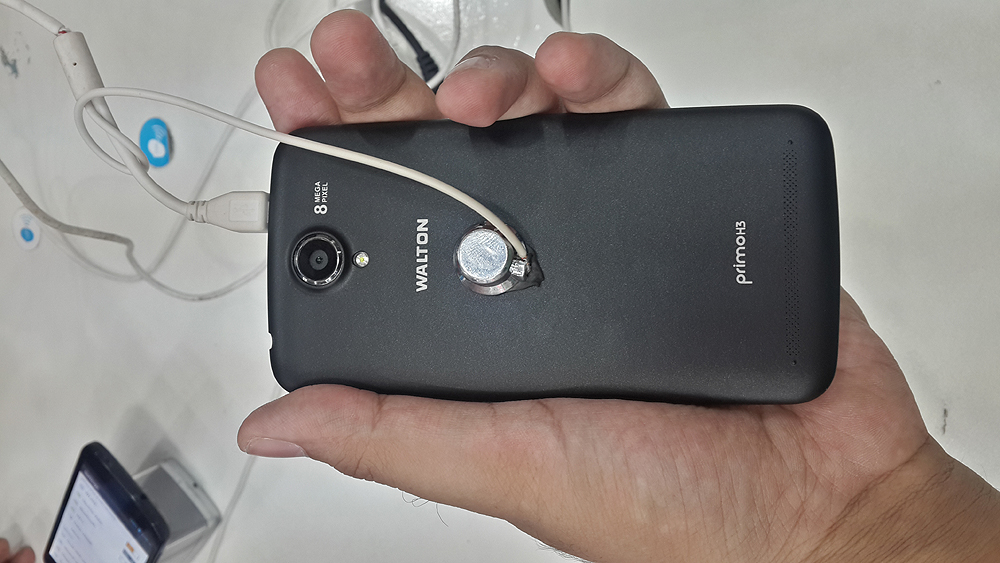 At the back, a huge spot is taken by the camera lens which looks disproportionate with the device. The huge bulge could be reduced to a thinner one instead. Lastly, at the bottom there aren’t any ports as both the microSD and the mic output is situated at the top.

The Primo H3 features a 4.7-inch IPS qHD capacitive touch screen display with 960 x 840 in resolution (240dpi). Inside the hood lies a low 1.3Ghz Quad Core MediaTek MT6582 processor with Mali 400 as its graphics processing unit, a 1GB RAM to keep things running and the late Android 4.2.2 as its OS. As you can already notice, the device isn’t a high end one. So if you’re expecting to play high-end games in this device, get ready to face a bit of hurdles.

To actually see how the Primo H3 competes with other similar smartphones, as usual, we ran the Antutu Benchmark tests. Firstly, the device scores 17459 in the tests putting it right near to the Galaxy S3. It can be deduced in one way that although the smartphone has been just released, its capabilities are still back dated.

According to the benchmark tests, it tops both Google Nexus 4 and HTC One X and is below the Xperia Z.

Here’s the graphics test that has been done in Nenamark: 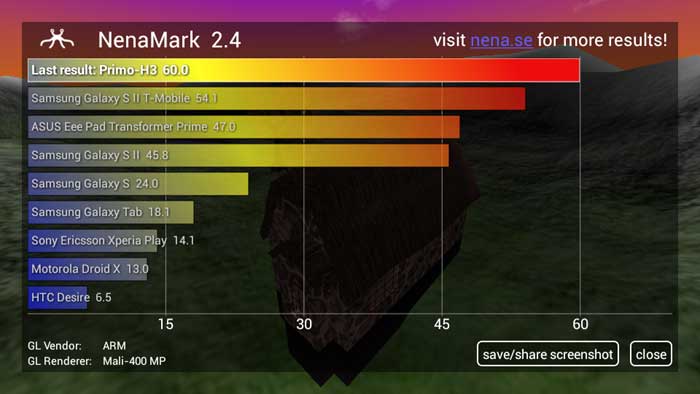 WIth the Mali 400 MP on board, the Primo H3 scores 60.0 in the Nenamark tests. Compared to the ones in the list, it is pretty high as it stands along with the earlier smartphones that we have seen. While playing high end games, I did not face any sort of lag but yes, the graphics wasn’t like the one you would find in the high end smartphones obviously. For a mid-range smartphone, gameplay in the Primo H3 is smooth.

The device has the basic connectivity that almost all the smartphones have such as WLAN b/g/n (Wi-Fi), Bluetooth V4, Micro USB V2 and WLAN Hotspot.

The not so high end device has a small battery 1800mAh which if used continuously might lose the charge in a day which is usual in all the cases of a smartphone.

Walton Primo H3 is one budget friendly smartphone which would be a great buy for those who are looking for another addition to their already existing smartphones. Since the device is already in the markets, it is currently retailing for Tk. 11,490.