We just finished live streaming Google I/O a while ago and boy oh boy do we have much to tell you. Most of the predictions made in our previous article turned out to be accurate with the exception of minor facts and details. Google’s Sundar Pichai started off their keynote with some mind boggling statistics declaring that over one BILLION devices running Android were active in the last month! Yes that is one seventh of earth’s population using Android daily!

Also to note is that Android now controls over 62% of the global tablet market share (excluding the kindle fire series from Amazon). So without further ado, let us jump into things! (Note, titles are listed according to order of the actual keynote presentation) 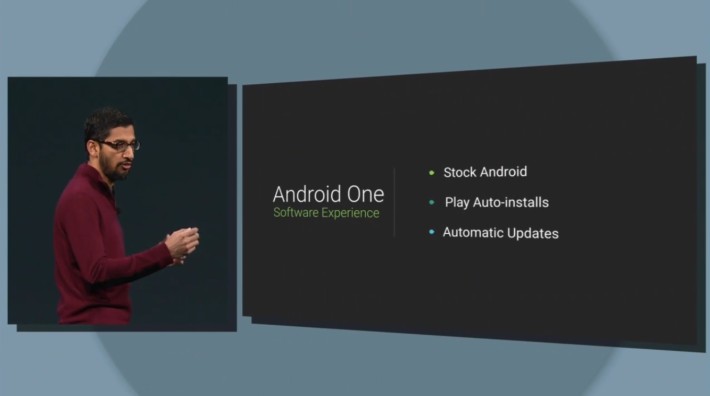 Google announced its brand new Android One Software Experience targeted towards emerging markets. The plan is to accelerate growth by providing a standard design like stock Android for the manufacturers in order to Android devices that cost around $100. In the demonstration a Micromax device with decent specifications was shown off that cost under $100.

The guys at I/O announced that the L release of Android will be coming this fall however they did not mention which L named dessert will bear the Android crown. The main highlight was what Google calls Material Design (We assume Quantum Paper was a code name). This basically brings a visual overhaul to Android to provide a consistent look and feel across applications as well as different across all platforms like tablets and smart watches. It incorporates more of a three dimensional interface than what we have seen in the past and comes loaded with lots of cool, smooth transitions and animations that make the whole experience feel united and in place.

Also announced was a tool called Polymer which allows developers to create web applications with the Material Design standards. With Android L comes a much improved and interactive notifications system that has Peek like capabilities from the Paranoid Android Rom.

Notifications essentially are now more interactive and useful in the lock screen and also bring a new heads up type system where a notification pops up on the screen while suppose playing a game. The notification can be easily dismissed by swiping or interacted with directly from the pop up. Android L also brings a redesigned recent applications interface that is not only prettier to look at but is more functional. A very nifty new feature is personal lock. If the device owner uses a smart watch and has the device in hand, lock security will not be required however if the person was not wearing the gadget then the user will have to go through lock screen security.

Android L comes with a factory reset mechanism that should help prevent theft. A new default keyboard was announced as well that made the already awesome keyboard even better. A minor detail to add is the redesigned logos of the soft keys. Another confirmation of our prediction is that ART will be the default compiler used in the L release which by the way is 64 bit compatible. Finally we have Project Volta, a new way to monitor battery statistics and usage that helps conserve battery life. There is also a new stock built in battery saver mode.

Android Wear was of big talk at I/O with details of the LG G Watch surfacing as well as the arrival of the newly announced Samsung Gear Live. Both devices will be available for purchase today from the Google Play Store.

The Moto 360 however will be available later on. Google stressed throughout the presentation how applications and notifications would sync flawlessly across smart phone and smart watch and also showed off how swift and simple it is to navigate through the Android Wear OS. The main highlight of Android Wear is Google Now which comes in a much more robust and useful package and essentially makes the wearable infinite times more useful and easy to handle. The majority of the presentation was spent demonstrating the three aforementioned smart watches and the functioning of the OS. Much to our surprise, Google Glass was not given a dedicated presentation and was simply mentioned here and there.

As we had predicted, Google showcased its entry into the automotive industry via Android Auto. Currently Google is partnered with 40 companies and 25 car brands including big names like Audi, Mitsubishi, Ford, Volkswagen and many more to bring Android Auto to the market by the end of this year. As expected, Google Now voice controls are the main highlight.


Replacing Google TV is the newly branded Android TV. Turns out earlier leaks were correct about Google going for a more gaming focused approach. Android TV now sports a much simpler interface with again Google Now integration playing a major role. Games can be controlled using a game controller or an Android device.

TV sets with built in Android TV OS will begin to appear at the end of this year with some other companies manufacturing set top boxes that will bring the new OS to other TVs. The Chromecast received less attention but it was mentioned that the small dongle outsold every other streaming device by a wide margin. Also, users can now stream directly to the dongle. Lastly the any Android device can now be streamed directly to the Chromecast and we mean live mirroring. Anything going on on the device will be mirrored live.

Google brought some very cool features to its OS for Chromebooks but first they mentioned how the top 10 rated laptops on Amazon are Chromebooks. New features include greater integration with smart phones and auto activation upon approaching the laptop with the smartphone. Now, applications like Evernote native to smartphones can also be accessed from the Chromebook. Another cool feature is to be able to receive phone notifications like text messages and battery alerts on the Chromebook and respond to them. Even phone calls can be taken directly from the Chromebook. Among other minor notes is the arrival of Google Slides that allows creation of presentations as well as integrated support for Microsoft Office file courtesy of an acquisition of Quickoffice.

As a final note we would like to mention that many other projects such as the self driving car, Glass, Ara, Tango etc did not make an appearance on day one however there is another whole day of presentations ahead where these may make an appearance. Another key fact to note is that Google made no mention of the Nexus line or the highly rumored Android Silver which remains a mystery even now. There were also some developer related content not in the interest of consumers, nevertheless we will cover it in a followup segment if our readers demand it.

For more information about Google I/O stay glued to Techetron!