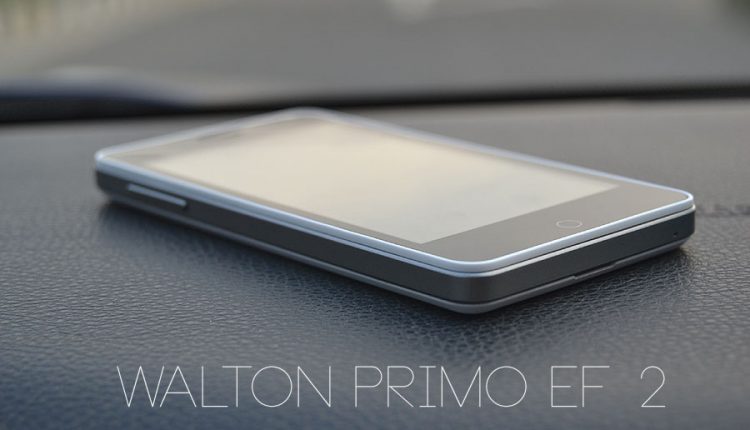 
Walton is famous in Bangladesh for its electrical appliances and strong competitive nature in the emerging smartphone market here. With a great track record and affordable price points, Walton is thriving. Their new smartphone, the Primo EF2 is a Tk/- 7,090 ($91.72) device that aims to reimagine the entry level smartphone and leave you pleasantly surprised. 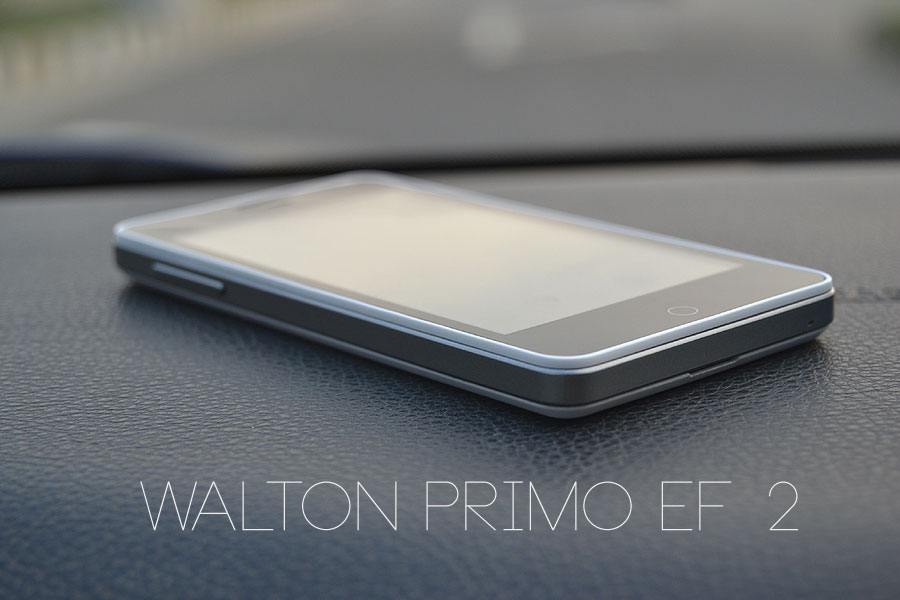 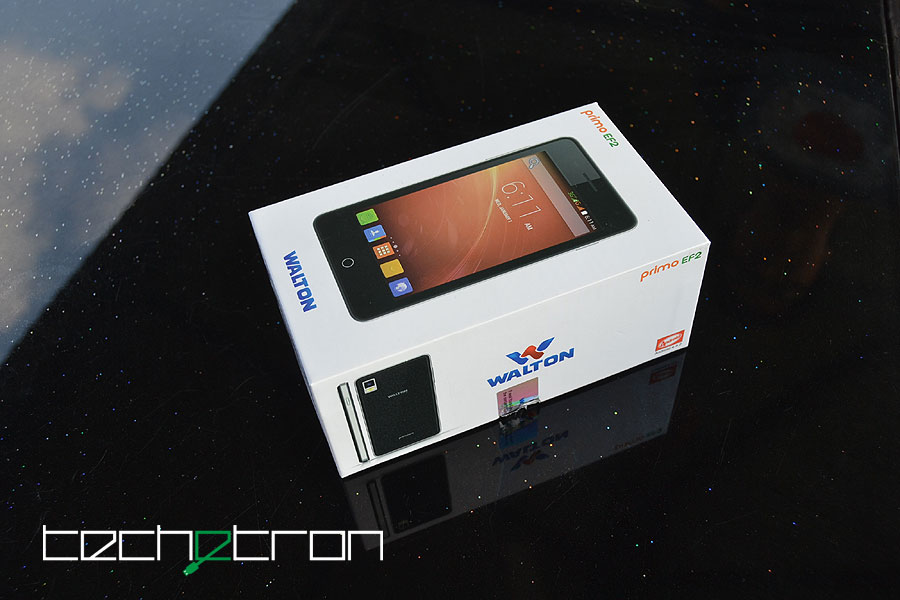 Let’s start with what you observe the moment you open the box, the design. The Primo EF2 from a distance will take you back a couple years to the Nexus 4 and iPhone 4 and that is not a bad thing. The phone is made of plastic and is unlike some of the cheaper materials we have seen in the past. Our white review unit had a matte finish which gave it a dash of elegance since there were no unsightly fingerprints on the body. The back of the device is removable and has a pixelated pattern quite similar to the back of the Nexus 4. The pixelation is subtle and does a great job keeping up the aesthetic appeal. A plastic band goes all around the device mimicking metal and offering flat sides for easy gripping. 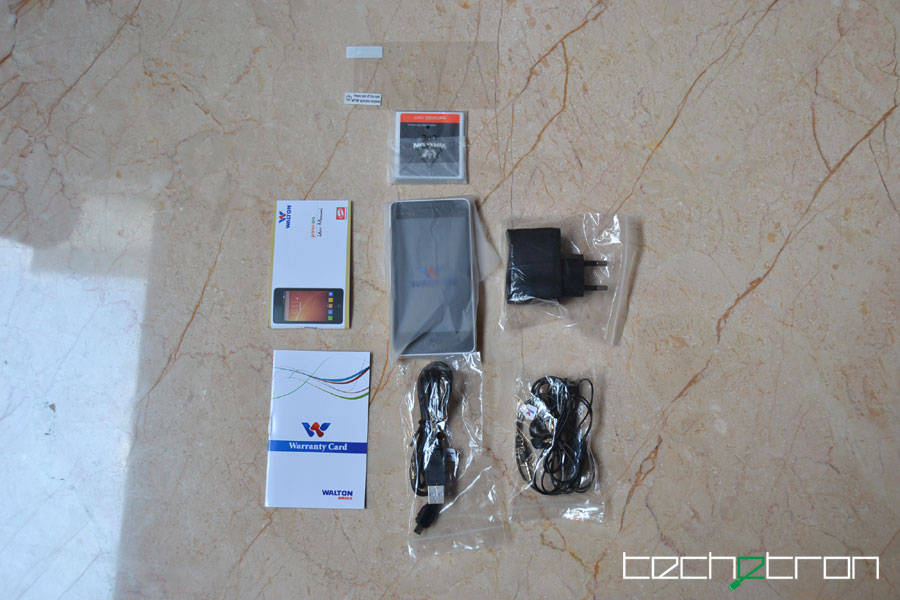 Talking about the gripability, the EF2 has a compact form factor which makes it an easy fit in the hand and makes one handed operation a breeze. Having used phones with displays greater than 5-inches for a while, the EF2 is a reminder of how much less cumbersome a 4-inches display really is. The phone also has a good weight distribution and is pretty lightweight which further adds to the comfortable one handed experience. 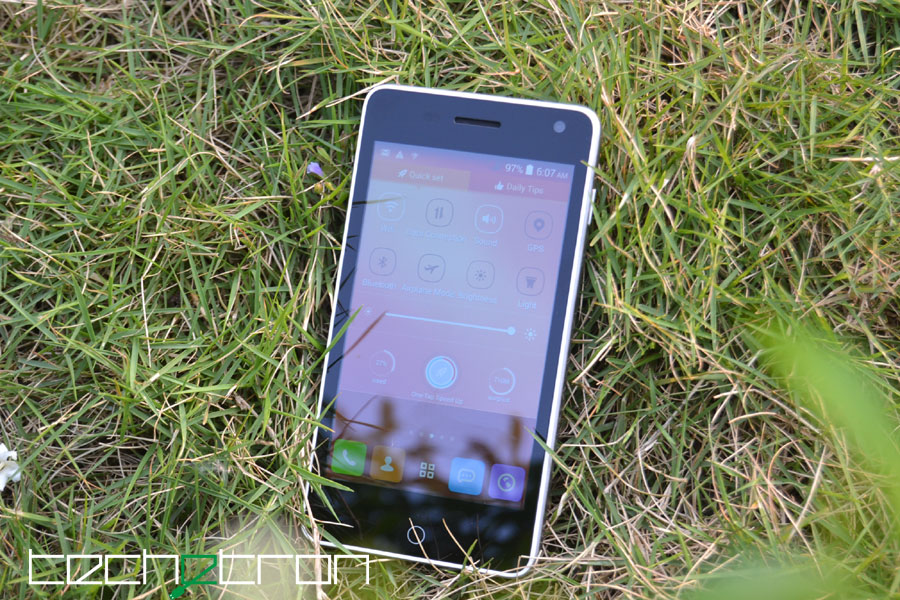 The front of the handset is just plain black with a small white circle centered on the bottom. This is the home capacitive key that Walton calls the Breath LED. The circle functions as both a home key and a notification LED. The key will glow when charging and when you have a notification. Tapping it once when the device is asleep will only cause it to glow but tapping it quickly twice unlocks the device. Once you get used to unlocking the device like this, you completely forget about the power button and start wishing other phones had this feature. You can say this is similar to the double tap to unlock feature found on devices like the HTC One M8 except you don’t tap the screen.

The Walton Primo EF2 comes with a 4 inch IPS display, 800 x 480 pixels at about 233 pixels per inch, the resolution expected of entry level smartphones. Just because it is is not an HD panel does not mean the display is bad. In fact the 233 pixel per inch density actually offers pretty good visuals, especially because the display is just 4 inches across. 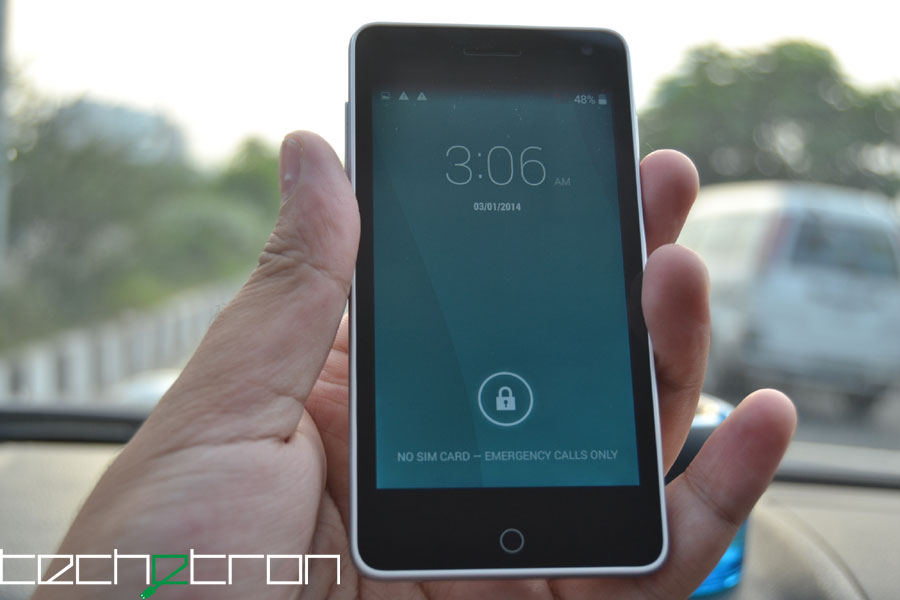 Viewing angles are nice and outdoor visibility is decent with the brightness set to maximum. Since the display is just 4-inches across, it is not as enjoyable to view multimedia on it. That complaint is one most Android folks will have though as people on iOS have been using tiny display since forever so this should not be an annoyance.

Over the years Android has grown to take over the majority of the world smartphone market and one of the main reasons was due to the fact that companies could offer these devices at entry level prices, albeit with some sacrifices in performance and specifications. As Android has aged, it has become faster, smoother and lighter thus allowing it to run effortlessly on almost every device. Gone are the days when non-flagship phones would lag and seize up, now is the era of the powerful entry level smartphone. 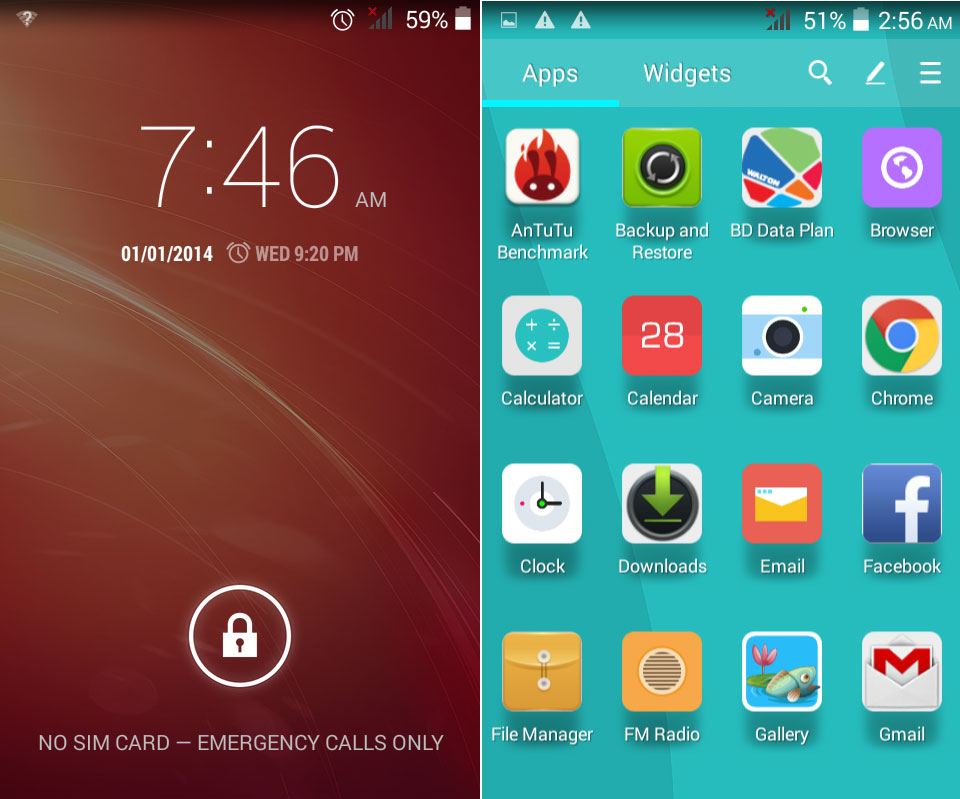 The EF2 comes with Android 4.4.2 KitKat with Walton’s Live Launcher running the show. The core of the software resembles stock Android but fundamental parts such as the home screen hosts Live Launcher. The launcher at first sight reminds us of the extremely popular Go Launcher but as you begin to use it the differences begin to emerge. The launcher is very light on RAM, contrary to my expectations and zips through with relative ease. There are no noticeable stutters when you scroll through the app drawer or home screens and the transition animations are nice and fluid, all of which are expected from KitKat. 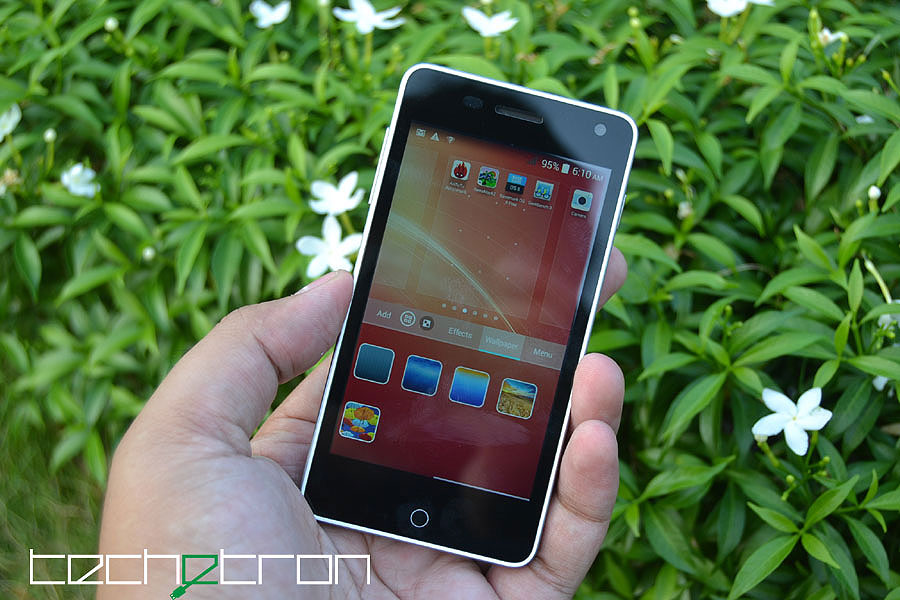 Since Live Launcher is running on top, the user gets the option to customise things like transition animations and themes which you can not do natively on stock Android. There is also a theme store app that comes preloaded which offers a wide range of themes for different tastes. Of course, if you do not like the available themes, you can alway download another launcher from the Google Play Store. We chose to try out Nova Launcher and it worked like a charm so if customising is your thing, this phone will have no problem.

As we mentioned before, aside from the home screen launcher, most of the software is stock Android and here the Primo EF2 takes advantage of a number of KitKat’s offerings. Functions like the notifications and setting are left unaltered and so is the lock screen so if you appreciate how stock Android deals with those then you will feel right at home. The OK Google hotword detection is available from any screen as well as from sleep when the phone is charging so you can execute many actions hands free. On top of that, Live Launcher comes with some gesture functionality. A swipe down on the homescreen (except from the notifications bar) pulls down a quick toggles menu that you can also use to adjust brightness on the fly. The pull down also has one tap RAM cleaner. Swiping up brings up a menu from where you can change wallpapers, themes and modify the different transition effects and theme preferences. 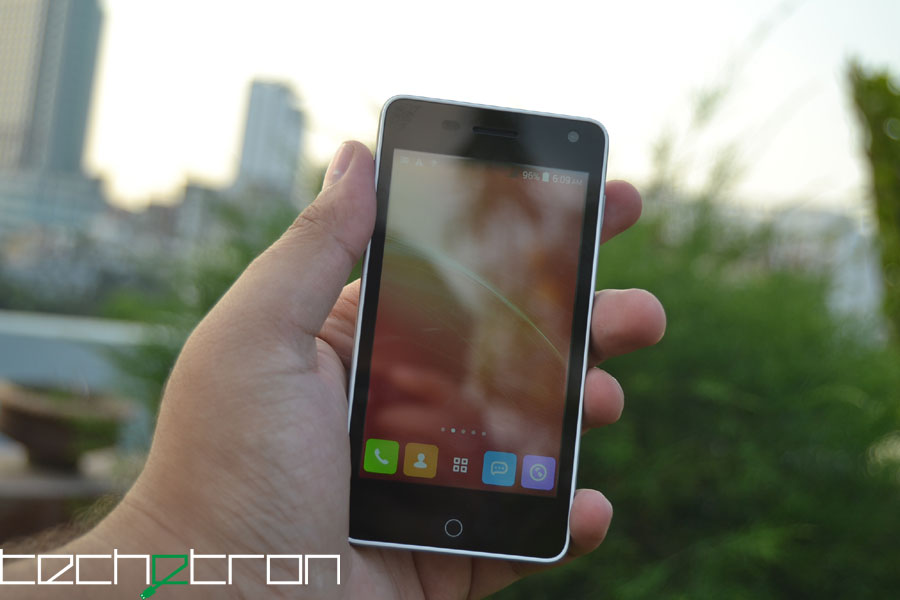 Many people have a lot of things to say about pre installed apps and bloatware and most of the time they are not very positive. Walton on the other hand preloads some very popular apps like Viber and Facebook on their smartphone along with a few additions of their own. One app that stood out was the BD Data Plan which basically compares all the internet packages of all carriers in Bangladesh. The app is more utility based and is truly helpful to anyone looking for a data plan. Another noteworthy pre loaded app is the Movie Studio. It is a really simple app that allows you to seamlessly stitch together audio, video and images to make one “Movie”. The process of making the movie is incredibly easy and intuitive but don’t expect it to rival traditional video editing applications, this is just something for casual content creation.

All in all, the software is light and clean thus offering a clutter free user experience. Walton chose not to make too many additions and only inserted things their customer base would want or need.

What took me most by surprise was how fast the phone is. The Primo EF2 refused to lag and stutter even when multiple apps were running in the background. The 1.3GHz quad-core processor and KitKat are to thank for this as well as the lower resolution (800 x 480) display since the processor does not have to push too many pixels. The EF2 uses a Mali 400 GPU. However since there is only 1GB RAM, you can not run too many applications all at once. Nevertheless, given how much the device costs, it more than makes up for the RAM. 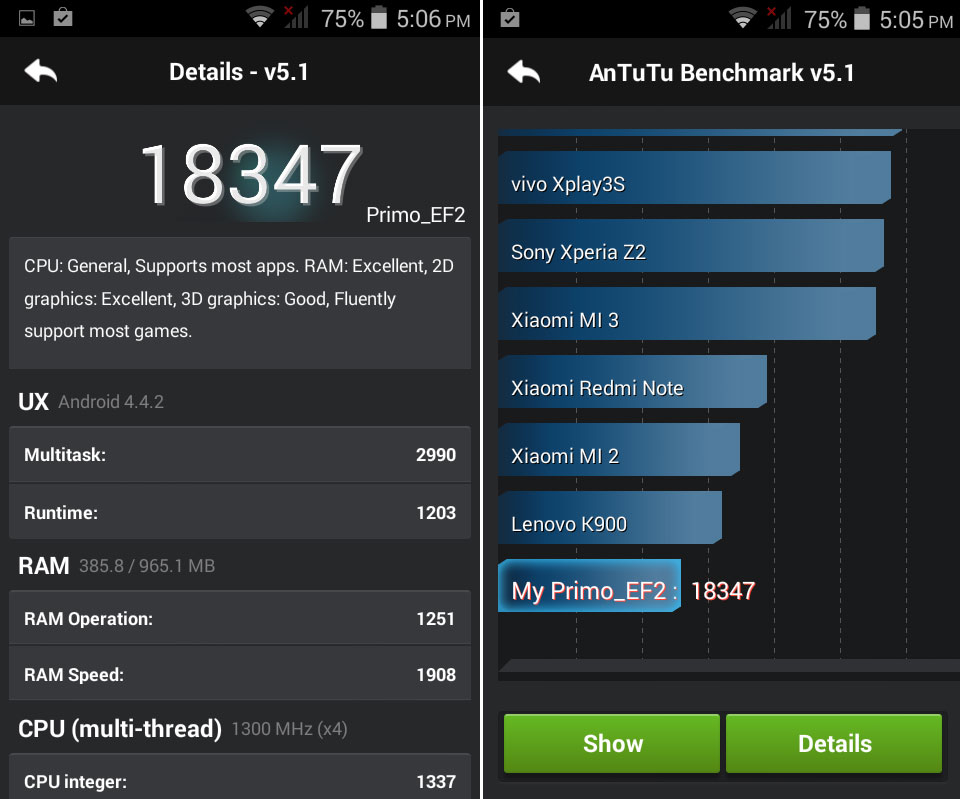 Games ran smoothly most of the time although some more intense games would occasionally cause stutters but it wasn’t anything that would make you not want to play the game. Lighter games on the other hand fared well. Other common activities such as typing and web browsing worked fluidly as well. 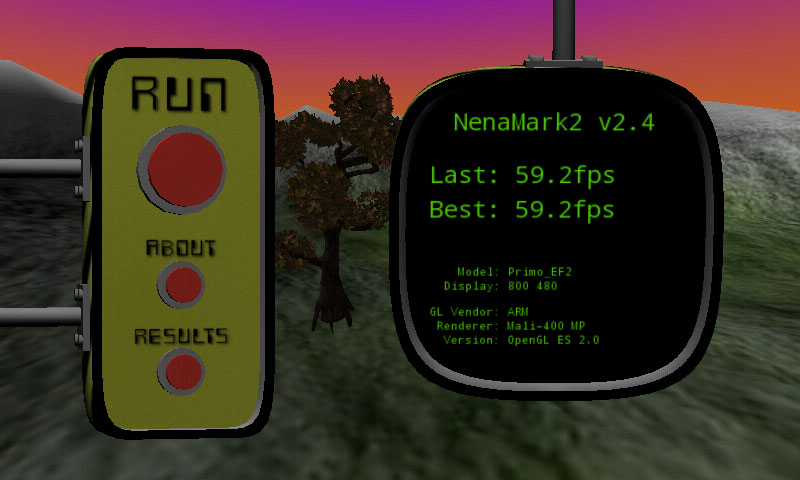 The Primo EF2 comes with a removable 1500mAh battery which can get you through a light day of use and barely through with some moderate usage. More heavy usage of the phone will drain the battery pretty fast and you would need to plug in sometime during the day. On the plus side, since the battery is not very large, it does not take too long for it to reach a full charge. 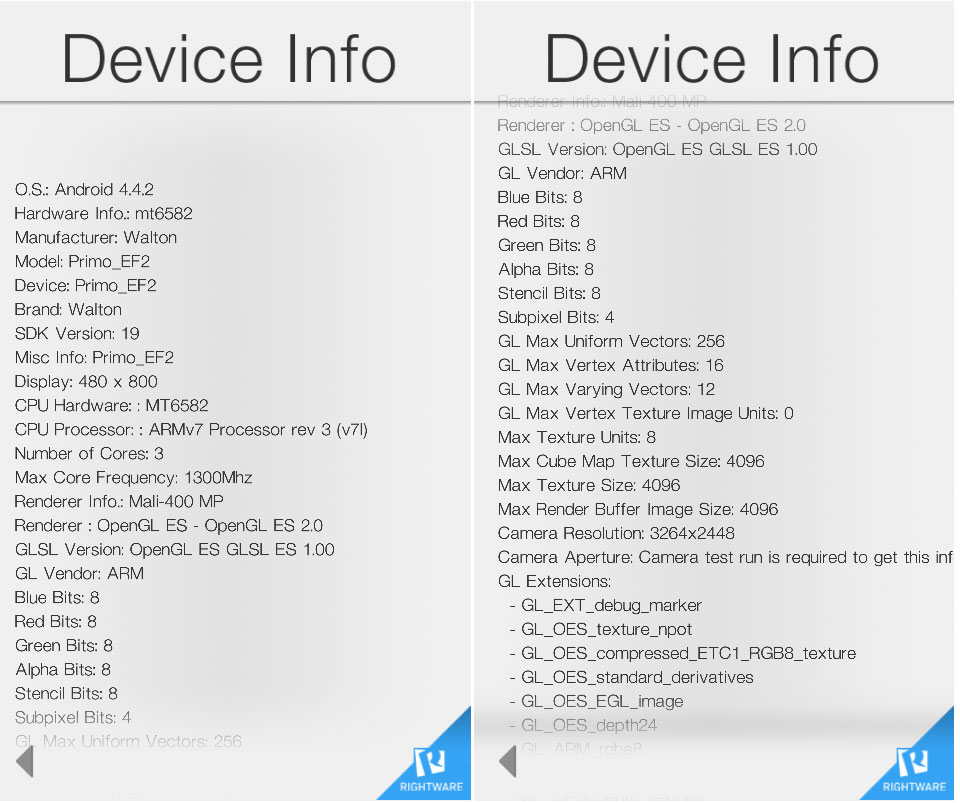 The one major drawback of the device is the 4GB on board storage. The limited space will fill up quickly if you download a number of apps especially if you use Android Run Time (ART) instead of Dalvik. There is a microSD card slot though so you can store a great deal of your media on that but still, some more storage would have been more appreciable. 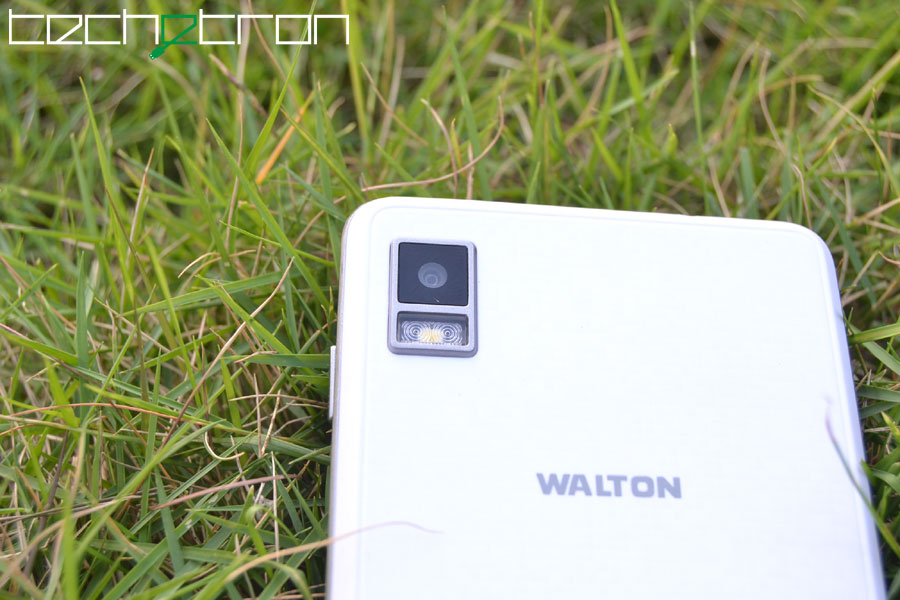 The camera is one area where Walton tries to offer numerous options and features to enhance the shooting experience, many of which are useful. It is obviously accessible directly from the lockscreen and launches relatively quickly. Walton put a 5-megapixel sensor on the back with a flash module that can shoot 1080p video and a VGA camera on the front. The camera has several modes such as Panorama, Beauty Shot and live picture which takes a few seconds to process. Regular images on the other hand get processed almost immediately. There is also an HDR mode but when accessed, the flash is not usable. 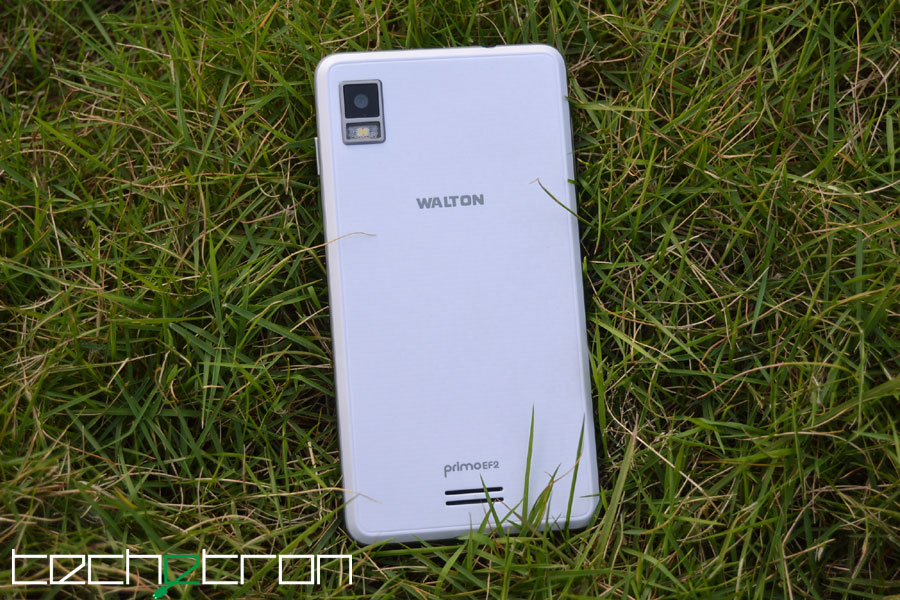 Images on the Primo EF2 are okay, the camera is clearly not the best from Walton and was a likely sacrifice to cut price. Daylight images are decent and will get the job done for casual snapping but low light images are grainy and not very good. Often times the subject would not be visible in low light conditions. The front facing camera is passable for uploading selfies to social media though adequate lighting is recommended for best results. The 1080p video is also okay, the results are nothing too special but the option is there for those who seek it. The video camera does have one cool trick where you can choose not to record any audio. 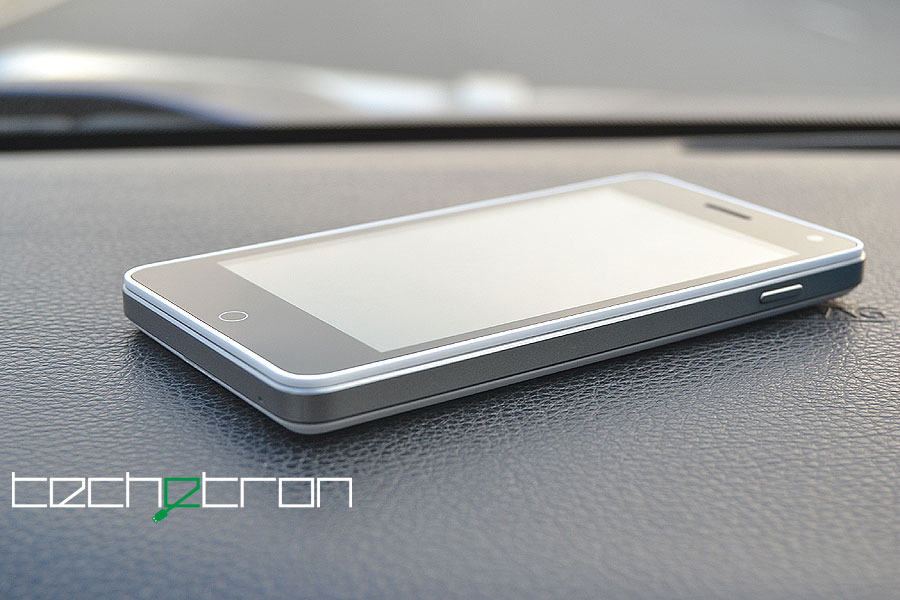 The Walton Primo EF2 retails at Tk/- 7,090 and for what it has to offer, it is dirt cheap! During my review process I went around handing the phone to people unfamiliar with it and asking them to guess the price and everyone thought it cost more than double its actual price!

What pleased me was seeing how everyone complimented the surprising quality of the software especially given its market value. The hardware too is appealing. At the end of the day though, we have to conclude that the smartphone is indeed very good but what makes reviewing this more pleasing is the bang for the buck. This device is catered to those looking to enter Android or get something cheap but unlike many alternatives, the Primo EF2’s experience is a superior option.