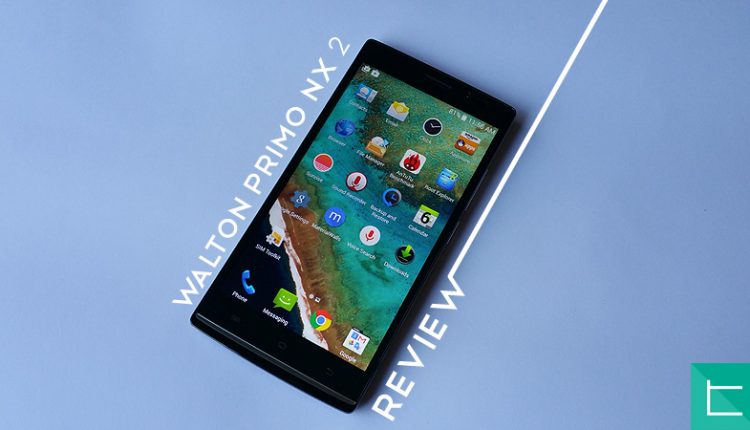 
We have reviewed our fair share of Walton devices and in that time period we have seen the company make numerous changes in both their design language and software experience. With 2015 already in motion, Walton has announced some new devices; among which is the Primo NX2 which we have reviewed. So without stalling any further, let us hop into the review! 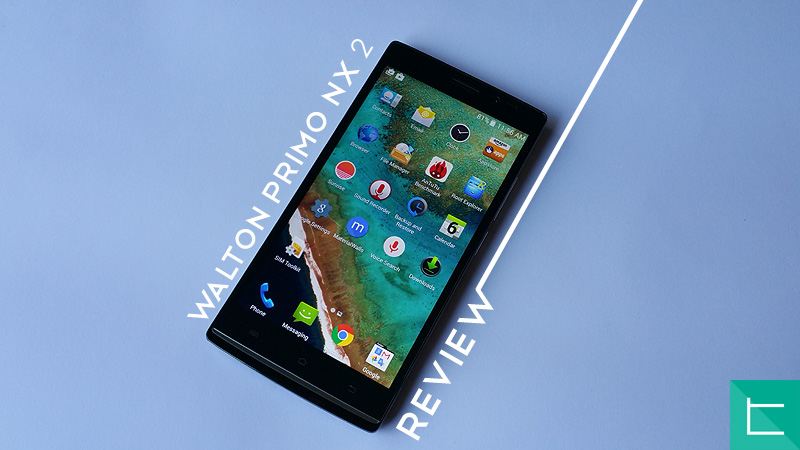 If you’ve read our reviews for a while, you know how things go around here. Let’s start with the aesthetics and ergonomics. The NX2 is an attractive device in Walton’s typical simplistic fashion. Upon first glance, I noticed it had some similarities with the infamous OPPO Find 7 and that is not a bad thing. The Find 7 is a premium smartphone both in terms of looks and feel and the NX2 displays those same traits, albeit without a metal body. The device is made up of plastic with a soft touch removable back. The back has a slight curve along the edges making it conform comfortably to the hand. 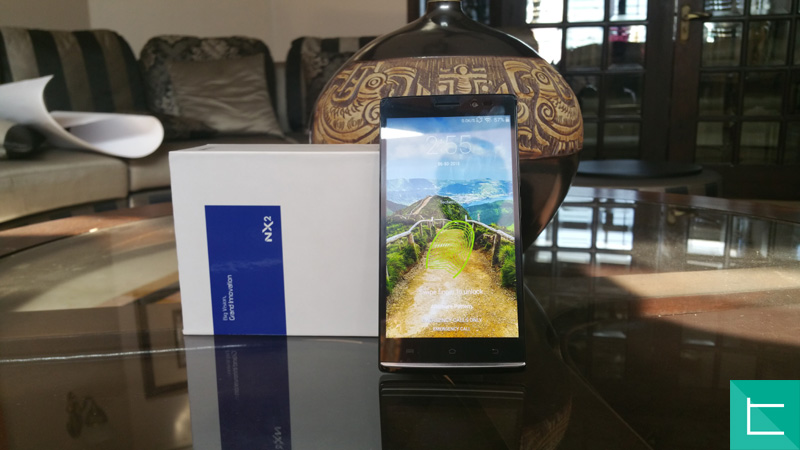 The sides are flat allowing for easy gripping and have two parallel lines of a chrome like trim going all the way around the phone. The trim is obviously not metal however it lends a nice aesthetic touch. On the front of the device, there is a noticeable chin just below the capacitive keys which features a piece of what feels like a translucent plastic. The chin piece has no function and is merely ornamental. The capacitive keys on the other hand seem to be a tad bit dim, making them difficult to distinguish outdoors. 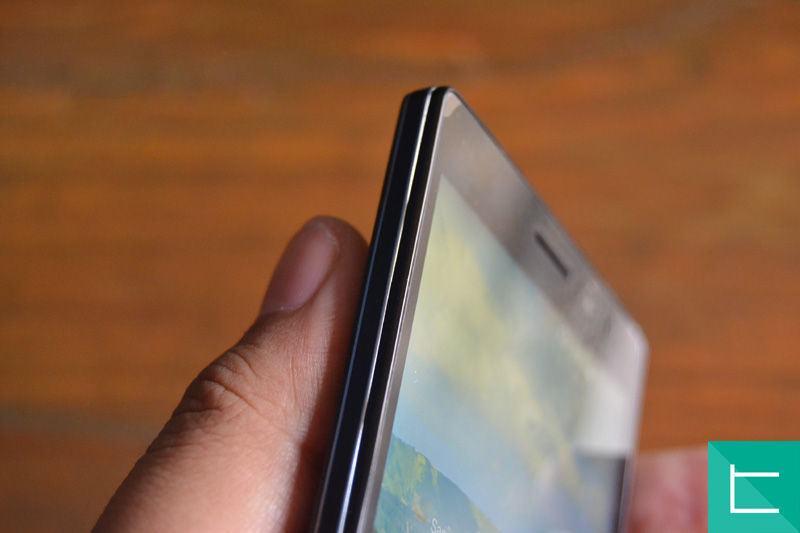 With a 5.5-inch display, the Primo NX2 dwells in phablet territory with an overall size very close to the Galaxy Note 4. The device is relatively thin horizontally but vertically the large chin gives it a greater than expected footprint. Nevertheless, the materials used to craft the device are not slippery and the flat sides make this an easy phone to hold. The phone is also built well and feels quite sturdy when being handled. 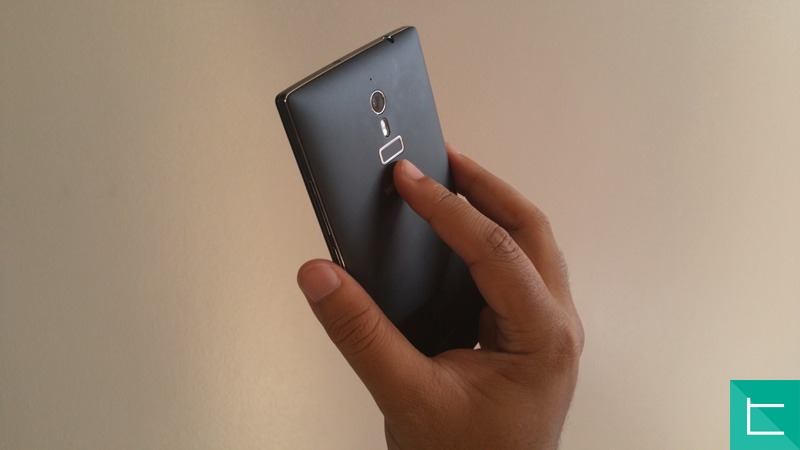 Moving to the more functional parts, Walton has included a swipe based fingerprint sensor on the back right below the flash. The sensor is rectangular in shape similar to the home button on Samsung devices. The fingerprint sensor is placed in a very good location, a spot where the index finger naturally rests and works surprisingly well. Nine times out of ten the fingerprint scanner works excellently so long as you don’t swipe too fast or miss the sensor. The scanner is used to unlock the device and allows you to use a backup PIN, password or pattern lock in the event that it fails. The fingerprint sensor is an astonishing addition the Primo NX2 and is something that adds a great deal of value, give the device’s price. 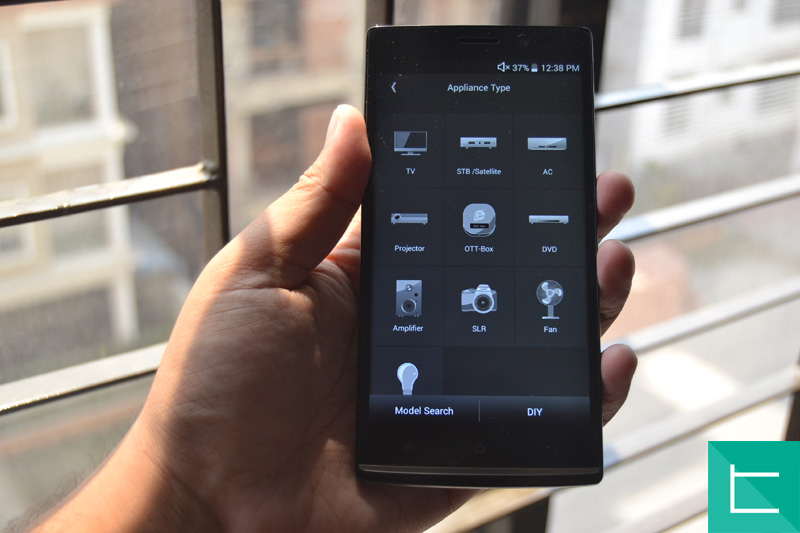 Another value addition is the infra-red (IR) blaster situated on the top of the device. Primo NX2 comes with ZaZa Remote, a very capable IR application that allows you to control your TV, set top box, AC, Projector, DVD player, OTT Box, amplifier, SLR camera, fan and IR compatible accessories. There is a very large offering of compatible brands and in my testing period, all the appliances in my home worked perfectly with it. You can also just look through the Play Store to find a more suitable app if the one built in is not to your preference. 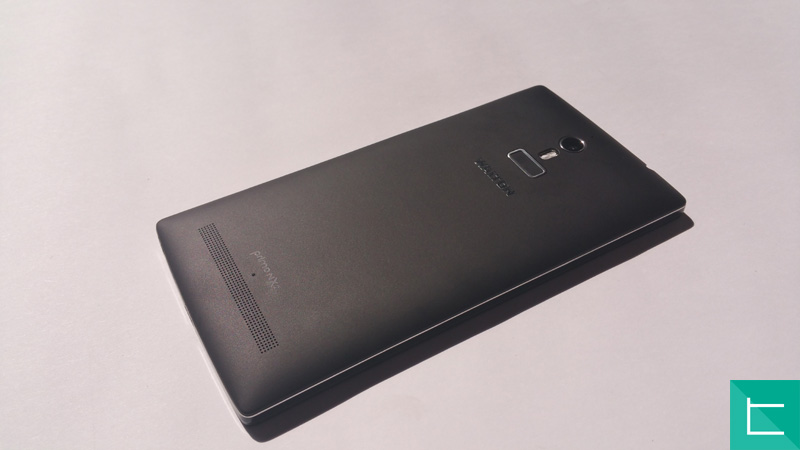 On the bottom of the back plate lies a wide speaker grille. If you remove the back though, you can easily see that the actual speaker module does not stretch all the way across and is just placed on the bottom left. The speaker is plenty loud and makes for a great experience when watching videos or playing games. Since we are taking a look under the hood, we should mention what else the NX2 hides under the back cover. Primo NX2 has a 3,000 mAh removable battery along with two SIM card slots and a microSD card slot. 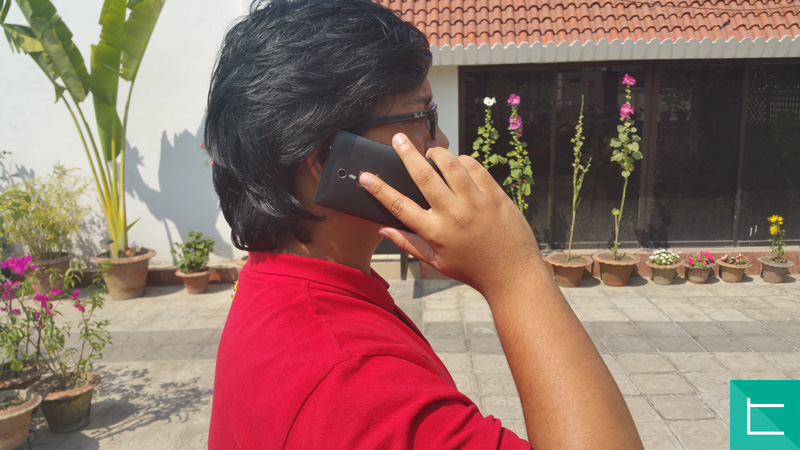 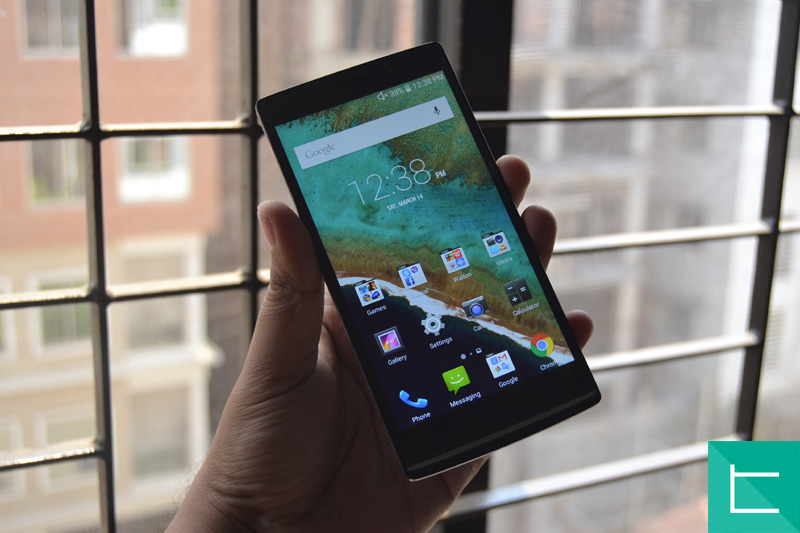 Walton opted to use a 5.5 inch 720p IPS display for the NX2. The display has a resolution of 267 pixels per inch and looks nice. We would have enjoyed a Full HD display more due to the large screen size but the HD module here works well. Colours look nice and warm and the display has good viewing angles. The brightness can be increased to quite a high point thus allowing the screen to be used outdoors. The brightness can also go down a good deal, making the device comfortable to use in the dark. 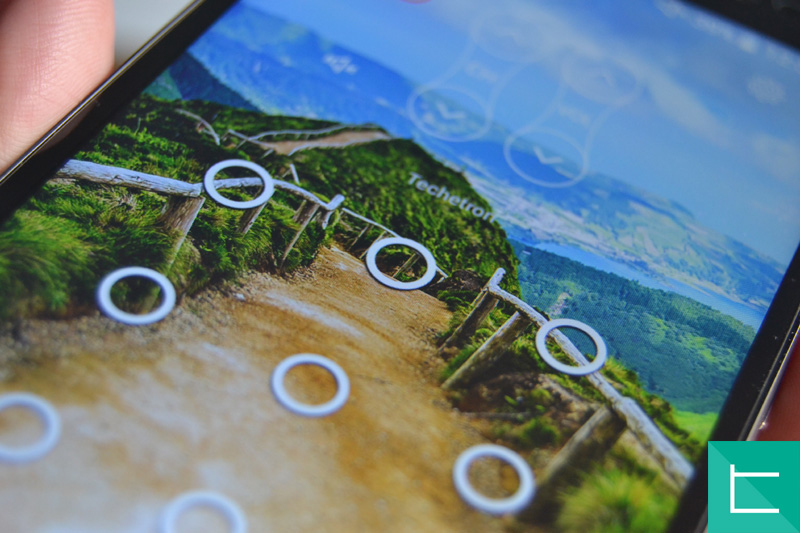 Walton made numerous changes in the software front. For the first time, we see a device that ships with not one but two launchers. The first launcher gives you a stock Android experience, nothing too fancy. I actually discovered it accidentally after downloading Nova Launcher and it was quite a pleasant surprise. 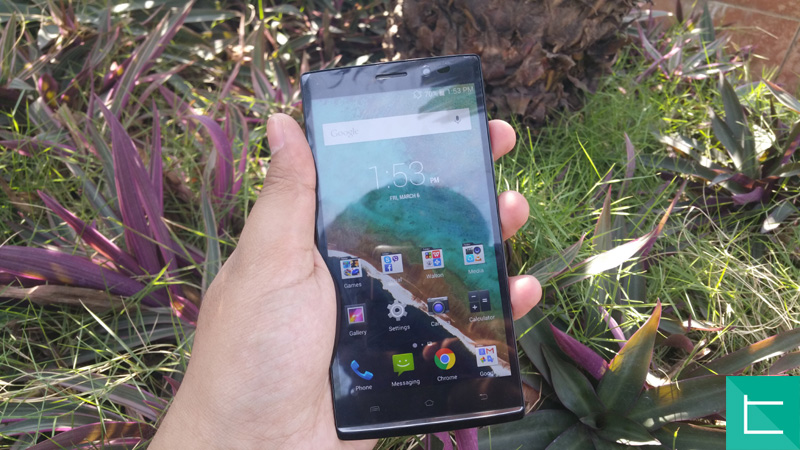 The second launcher is one that ditches the app drawer and has a layout similar to ColorOS. There is an “Exclusive Space” for a neat gallery and camera widget but other than that, the main difference remains the omission of the app drawer.

Walton chose to move away from the stock experience that we have seen on previous devices and has implemented a change on look and feel of both the notifications panel and the settings menu. They both feature a white simplistic motif and look quite attractive. Aside from the points mentioned above, the whole of the user interface remains constant like in Android 4.4 KitKat.

Walton does not leave the canvas completely blank and often opts to add software features that distinguish their products. We see a return of lockscreen gestures though the NX2 only has a double tap to wake and swipe up to unlock gesture.

Something we have not seen before on Walton devices is the ability to do true multitasking. Walton has added what they are calling a floating window. If you activate it from the settings, holding the back button brings up a small round toggle on top of whatever you are doing. From there you can choose to launch a floating window which plays video, offers music controls or shows your calculator over whatever task you are currently doing. It is similar to the small apps or multitasking features found on modern day LG and Sony smartphones.

Lastly, the Primo NX2 has support for over the air (OTA) updates meaning walton could potentially update you to a new version of Android.

Benchmark wise, we were not too excited with the NX2. However we learned the hard way that these numbers do not reflect true performance. Although the NX2 has a low benchmark score, we were able to do some pretty impressive tasks on it. The best example would be the ability to play Modern Combat 5 at a smooth frame rate, something we were unable to do on other devices that had higher benchmark scores.

Specifications wise, the NX2 has a 1.3GHz quad-core processor, Mali 400 GPU and 1GB of RAM along with 8GB of built in storage. The NX2 is really a testament to the enhancements that have been made to KitKat to allow for a smooth experience on minimal specifications. Battery life on the NX2 is great for a number of reasons. Firstly, the 720p display is less demanding than higher resolution displays and secondly, the NX2 has a massive 3,000mAh removable battery inside. For most folks, this device should take you through the day without breaking a sweat.

An Exmor R sensor lives in the NX2 and was surprisingly great given the 8 megapixel sensor size. Taking pictures was a quick and easy process though we must mention that the autofocus was a bit slow in certain situations. Daylight pictures were good as usual and even low light images fared well. Zooming in did not make the images too noisy though we would not recommend trying to zoom into subjects. Videos too looked good however in dark scenes, the noise was very apparent. 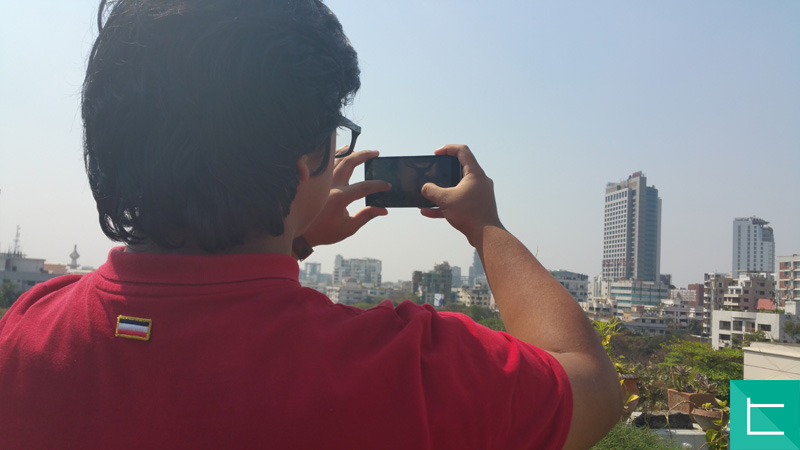 The camera interface has changed too and follows the same white motif as the settings menu and notifications tray. It offers a very clean look and gives quick and easy access to all the settings and camera features.

The Primo NX2 clearly does not have the highest end specifications. Nevertheless, it performs well enough for the spec list to be ignored. Walton has taken a different approach this time around by offering unique hardware additions that are not found on competitor’s devices such as the fingerprint scanner and IR blaster. The 5.5 inch 720p display is quite nice and makes for a pleasurable media consuming experience because of its size. All these add extra value to the NX2 and make it a compelling buy. At just Tk/- 14,490 the NX2 is competitively priced and should attract a good deal of attention.