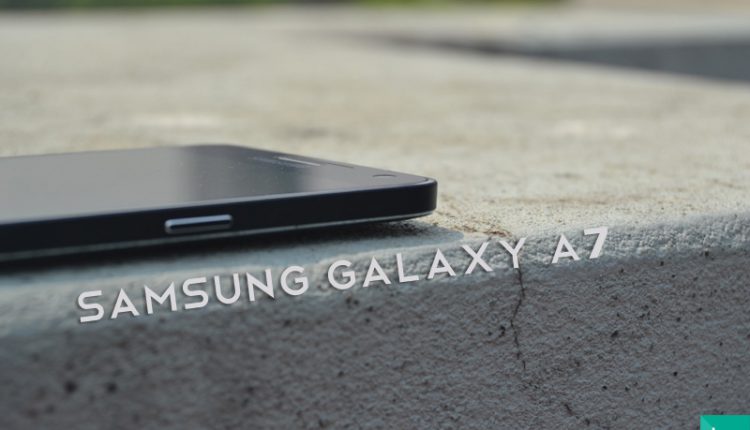 
The Galaxy Alpha and the Galaxy Note 4 spearheaded Samsung’s march into the world of metal however they were not quite fully metallic as both sported removable plastic backs. With the Galaxy A series, Samsung goes all in with the material and employs a metal unibody design. Of the trio of the A series devices, the Galaxy A7 is the higher end offering. We took the Galaxy A7 for a spin so read on for the full review.

The A series’ main focus is clearly the design, which is highlighted by the relative length of this segment. With a sleek full metal build and 6.3mm thin profile, the A7 hits the design aspect hard and makes a very good impression in terms of aesthetics. All the ports are cleanly cut out and all the buttons are made of metal. They are clicky and responsive with a good deal of travel when pressed. 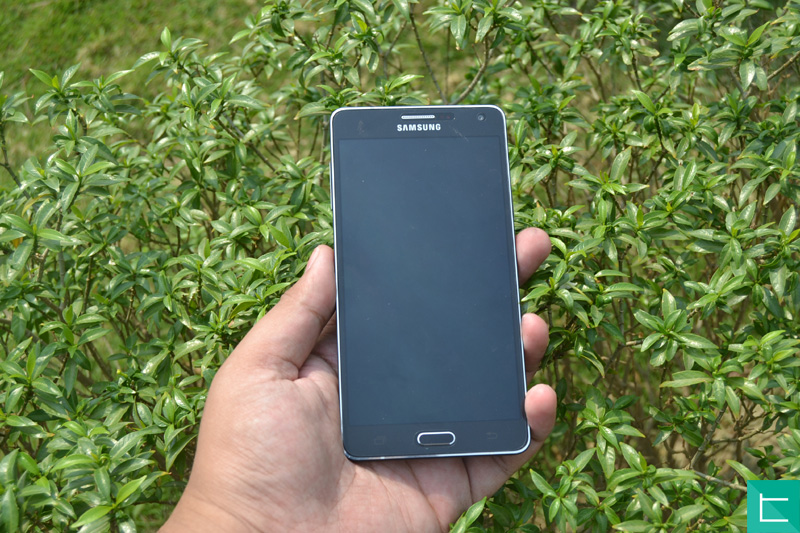 A mere glance at the phone will tell you it is a Samsung product, sporting the characteristic home button on the bottom and a very familiar shape, not to mention the bold Samsung branding under the earpiece. Whether that’s a good thing or bad is for you to decide.

Even though obvious cues have been taken from the Alpha and Note 4, the execution of the design here is excellent. The device feels sturdy and significant in the hand and the exposed chamfered edges look as good as ever. Like the Note 4 though, the shiny edges are incredibly prone to scratches. The only way to stop this from happening is probably by getting a case that covers up the edges, otherwise these are guaranteed to pick up numerous scratches. 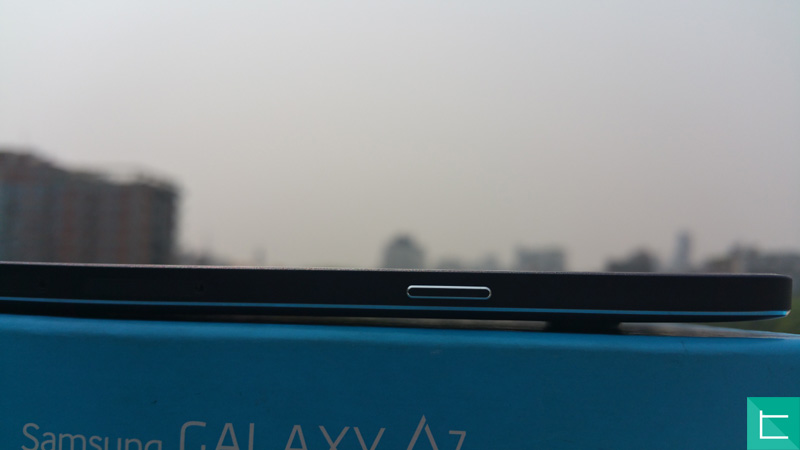 The rest of the body has a matte finish and is not like the scratch magnet mentioned above.Taking a close look at the finish reveals that the metal does not have a monotone finish (at least not on our black review device), rather there are specs of blue that are only visible when you get up close and personal.

Moving to the rear of the device, the camera is seen to stick out quite a good bit.This brings up obvious concerns of damaging the unit if you accidentally drop it on its back or slide it across a table. Hence a case is advised for all the not so careful users. The camera unit has a metal border going around it and looks similar to the exposed edges we talked about just a while ago. What came as a huge surprise was that this border did not get scratched at all which is very confusing. This goes to show that the chamfered edges could have been treated differently to be a bit more scratch resistant. 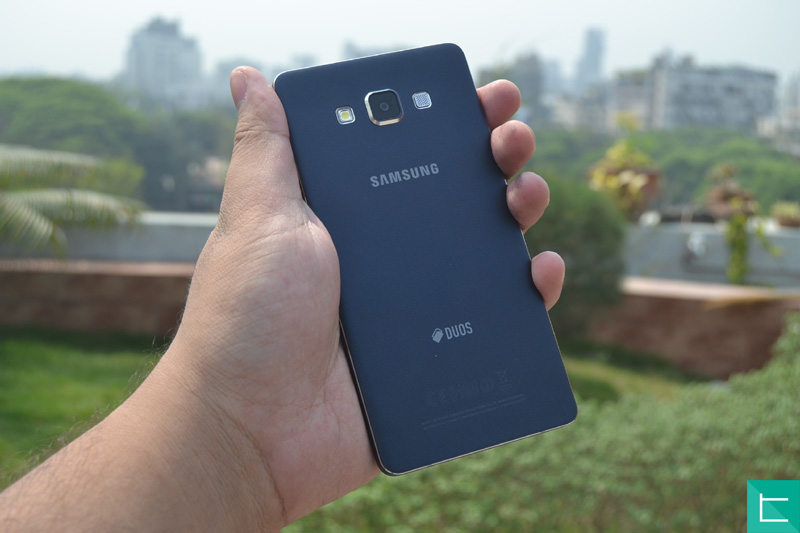 Flanking the camera module are the LED flash and speaker grille. The square shape of the two bring a sense of symmetry but we still do not understand why Samsung  keeps the speaker on the back of the device. The audio quality from the speaker is quite good but its poor positioning on the device does not allow it to shine much.

As the device has a unibody construction, the removable back has been ditched. This means you do not have access to the battery but unlike the newly released Galaxy S6, there is a microSD card slot. The omission of the removable battery is tolerable, I have never come across anybody who carries a spare battery with them nor have I ever had to replace my own smartphone battery. Some further detractors are the absence of a notification LED and quick charging.

Even though the device is 6.3mm thin, it weighs in at a good 141 grams which is balanced evenly throughout the phone. I was initially concerned about being able to comfortably hold the smartphone but those faded away soon after I began using it. 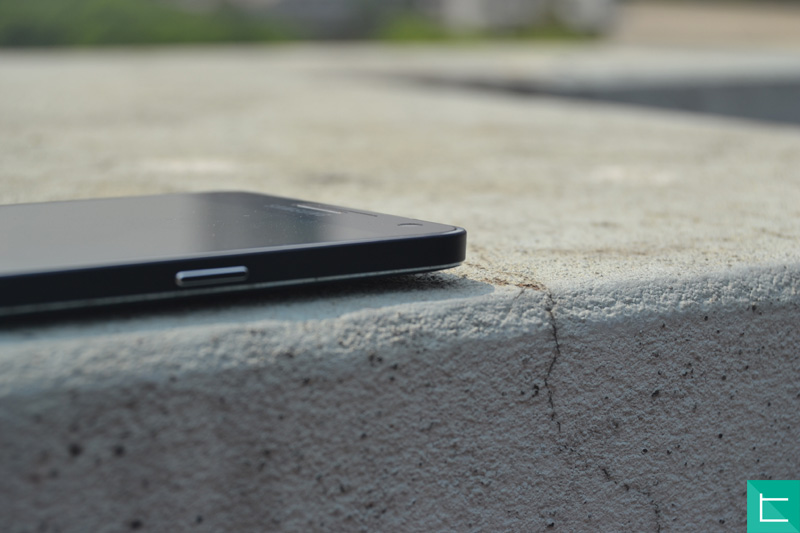 A lesson I have learned from using thin devices concerns their overall build. The A7 is thinner than the 6.9mm thin iPhone 6 yet it is not as slippery or difficult to hold. The same applied for the 4.85mm OPPO R5 which held the title for thinnest smartphone at one time. The key to making devices incredibly thin yet easily grippable lies in the sides, if the sides are flat and easy to hold, then the device can be handled with ease. if they are curved and smooth, then you might want to grab a grippy case.

The A7 has a 5.5inch Super AMOLED 1080p display with a pixel density of 401 pixels per inch. Needless to say the display is sharp and looks very vibrant and crisp, characteristic of Samsung’s super AMOLED panels. Anything above 400 pixels per inch is my expected standard for a high quality display. Below that, the differences start to get noticeable.

Like recent Samsung devices, the colours or not super oversaturated and unrealistic. They stay more true to realism  and reflect the actual image more closely than previous Samsung midrangers. 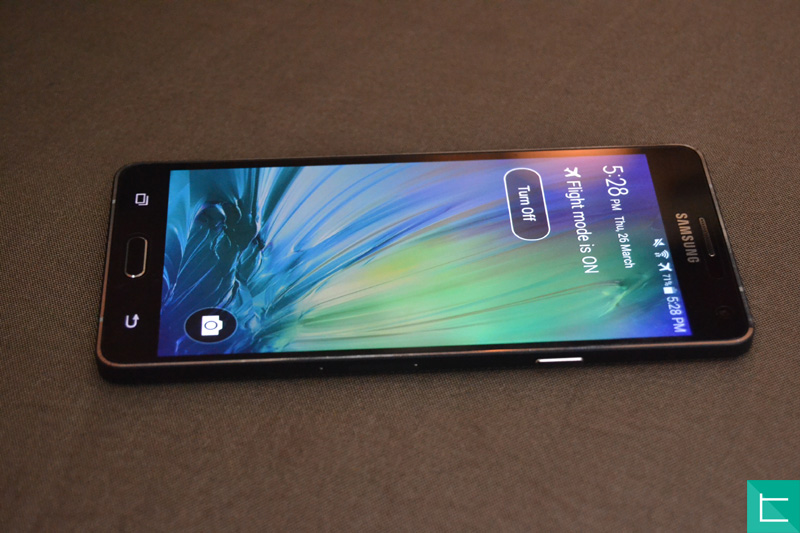 Viewing angles are great too and outdoor visibility is decent. The screen gets very bright but not so dim on the other end. The large 5.5 inch display is ideal for media consumption. Playing games or watching YouTube videos is an absolute delight. The good amount of real estate also makes inputting data via the on screen keyboard much easier.

The A7’s display is protected by the latest from Corning- Gorilla Glass 4. Gorilla Glass 4 as we all know, is stronger and more scratch resistant than the previous iteration and is the new industry standard. Scratches should therefore not be much of an issue but I still recommend a screen protector just in case.

The A7 runs on an octa-core 64-bit Snapdragon 615 (Quad-core 1.5 GHz Cortex-A53 & quad-core 1.0 GHz Cortex-A53) and is backed by 2GB of RAM. An Adreno 405 GPU does the graphical work. The device has 16GB of built in storage and is expandable via microSD to 64GB. The Snapdragon 615 is really the go-to processor for many modern day mid-range smartphones. Hence its capabilities are well catalogued.

The processor is good enough to play most games including intense titles like Modern Combat 5. However it must be noted that for an enjoyable experience, you have to play the game at the lowest graphics settings. 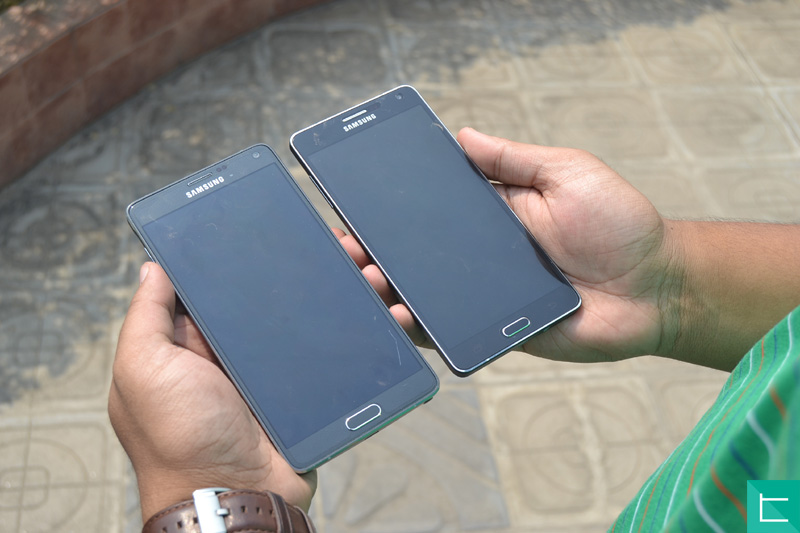 Other titles like Asphalt 8 are dealt with ease. The 2GB of RAM are enough for swift multitasking and contribute to a smooth experience.

Battery life of the A7 is quite surprisingly good. The 2600mAh non removable battery should power most easily through a full day of use. If you use the device intensely though, you may be reaching for a charger near the day’s end.

Speaking of charging, the A7 does not support quick charging which in this day and age should be a staple from Samsung.

If you have used a recent Samsung device, you will be at home with the A7. The device features a version of TouchWiz running over Android 4.4 KitKat very similar to the Note 4 and Galaxy Alpha, with a couple exceptions. As such, the A7 works very smoothly.

The version of TouchWiz on the A7 may be said to be better than the one found in the Note 4 as the flagship phablet has become infamous for lag when accessing the recent apps menu and when opening the gallery from the camera.

The A7 goes through TouchWiz like butter. This is not only because of the good processor and 2GB of RAM but also because of how well Samsung has optimised the skin and reduced bloat. Don’t get too excited yet though, this is still a mid-range device and as with almost all mid-range devices, software performance takes a hit when too many things happen at once. 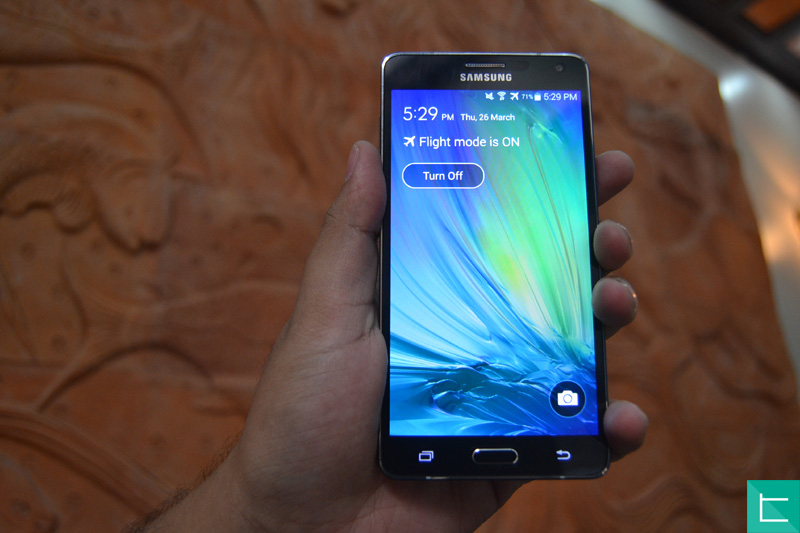 In most occasions, devices with less bloat are preferred but on the A7, the absence of the S

Health application was felt. S Health is probably one of the company’s best and most useful applications, not including it in the A7 does make sense since it does not have any biometric or UK sensors but it would still have been handy to have it for the pedometer.

The old “TouchWiz lag” is no longer existent in this day an age, with stutters occurring on rare occasions. Going through the user interface, you will rarely run into slowdowns or skipped frames. Overall, the experience is that of a high quality KitKat smartphone with hints of the mid-range internals only showing when executing highly intense tasks. 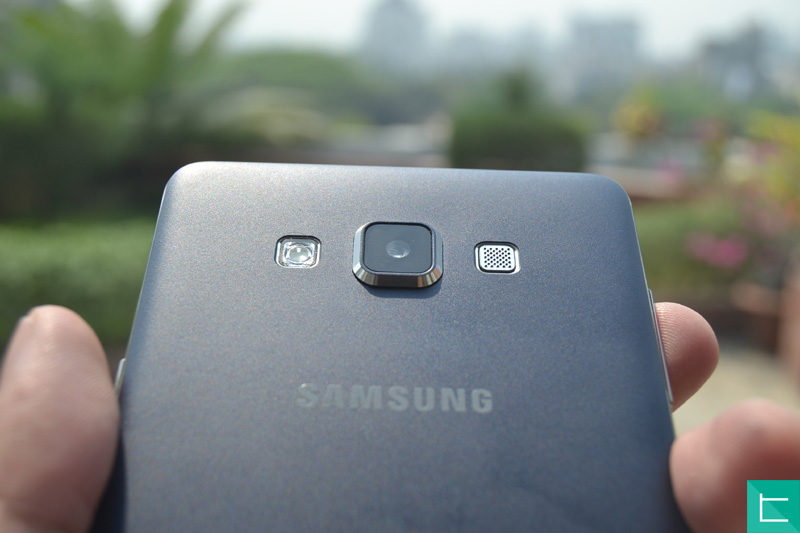 The main camera functions in typical Samsung fashion. The images come out nice and bright in good lighting and are slightly over saturated. Everything looks vivid and pretty and the level of saturation here is often more preferable than the regular level. In low light situations the camera is nothing extraordinary, producing above average shots.

The camera interface is identical to that of the Note 4’s and even functions similarly. Pictures were snapped rapidly and autofocus worked quick enough. The front facing camera is a 5 megapixels CMOS sensor and captures very good quality selfie sin 4:3 aspect ratio which again can be changed in the settings.

As the A7 targets a more young and robust audience, it was essential for Samsung to improve their selfie game. Samsung added a gesture for capturing images where the camera would start a timer and take a photo after it detects your palm or hears the command words “capture”, “smile”, “cheese”, “shoot” or “record video”. Additional software features include the ability to smooth out blemishes, slim your face or enlarge your eyes. Sometimes the results are nice but at other times they come out creepy.

Although the main camera is a 13 megapixels sensor, there is no inclusion of a slow motion or fast motion shooting mode. There is also no optical image stabilization.

The Galaxy A7 costs Tk/-38,000 (about $475) and is by no means the cheapest mid-range smartphone. For the same price you could pick up a number of other devices with similar or even better specifications. What the A7 offers that its competition does not have is a superior, premium design and build. The A7’s build quality is among the best in the market and the device screams luxury the moment you pick it up.

The A7 is not just about the aesthetics though, it packs a very capable processing package along with a large Full HD display that makes media consumption an excellent experience. The great camera sensors on both the front and back are very appealing and come with Samsung’s image processing, something that clearly beats image processing done by other manufacturers at the mid-range market. Even TouchWiz is not holding the device back from giving its best.

While there are quirks such as the non-removable battery, absence of quick charging and a notification LED, the A7 has mostly positive points in its favour.

To conclude, the Galaxy A7 is not meant for everyone, it is targeted at those consumers who are looking for a fashionable, well built smartphone below the price of a flagship. The A7 therefore meets the demand of a very large audience of young consumers who are not as bothered about specifications but still want a great user experience. All in all, the Galaxy A7 is a great device that could have been more successful if it were a bit cheaper.