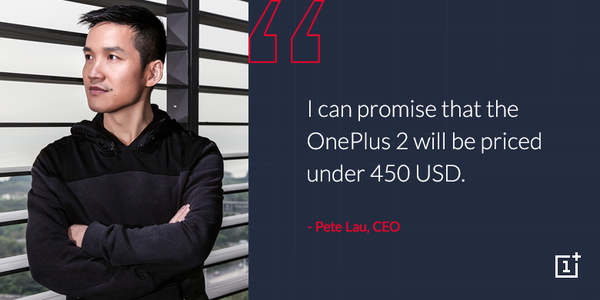 The latest addition to the teaser campaign by OnePlus is the price of the product and this time, it’s straight from the CEO, Pete Lau.

This is a great leap from the initial pricing of the OnePlus One which started at $299 and currently is on sale at $249. With the higher variation in price, this makes OnePlus 2 a premium device.

According to the rumors, the OnePlus 2 might include a 5.5-inch QHD screen, a poerful 4GB RAM, 3300mAh battery, a 16MP main camera and a 5MP front facing camera. The device might also be sporting a fingerprint scanner which would be a good addition. However, this might be the cause of an increased price. As for the OS, the OnePlus 2 will have the OxygenOS installed which might be paired with Android Lollipop, with no confirmation to this.

What we are sure about the device is it sporting Snapdragon 810 CPU, USB Type-C port and will be released on July 27th.

We shall update you more with any new information that we get regarding the OnePlus 2!