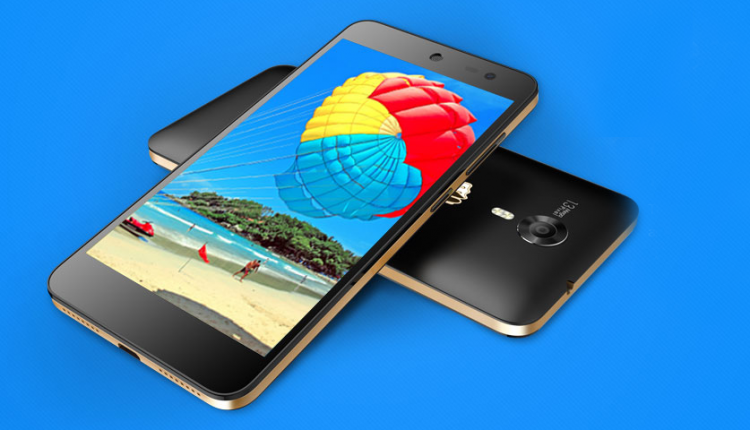 
With an Octa Core Mediatek MTK6592 processor, 1GB of RAM, 13 Megapixel rear camera and a price tag of Tk. 8450 the new Micromax Canvas Xpress 2 appears to be the mid range dream phone; at least on paper. In this review I’m going to share my experience with the phone after two weeks of use. 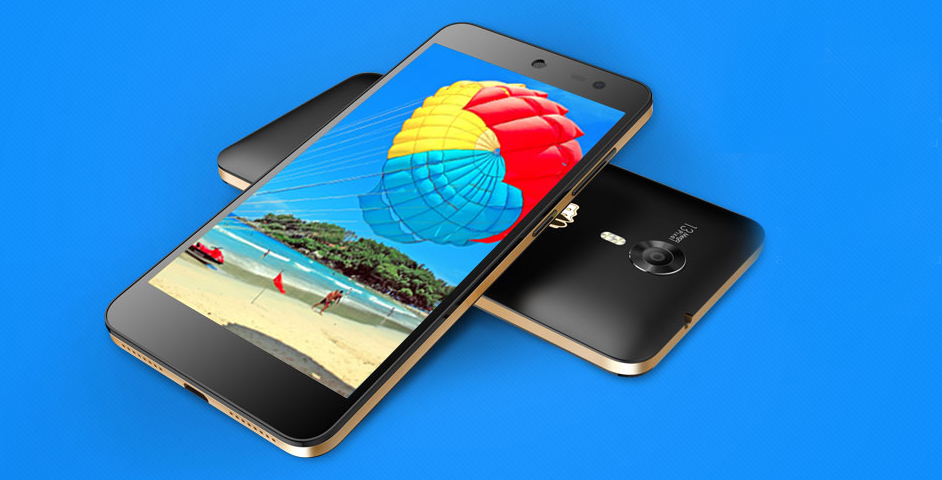 The phone comes in a very non-traditional package, a small black premium looking box with a lot of stickers on it. After ripping the plastic wrap apart and removing the lid, you are greeted with the smartphone along with a good looking charging wall adapter, the regular ugly micromax data cable and a quite decent pair of headphones. A screen protector is also included but I’m not sure how many people would actually put that on the gorgeous gorilla glass 3 screen. I did however give in and put on my screen protector after a week!

The Build of the Phone: 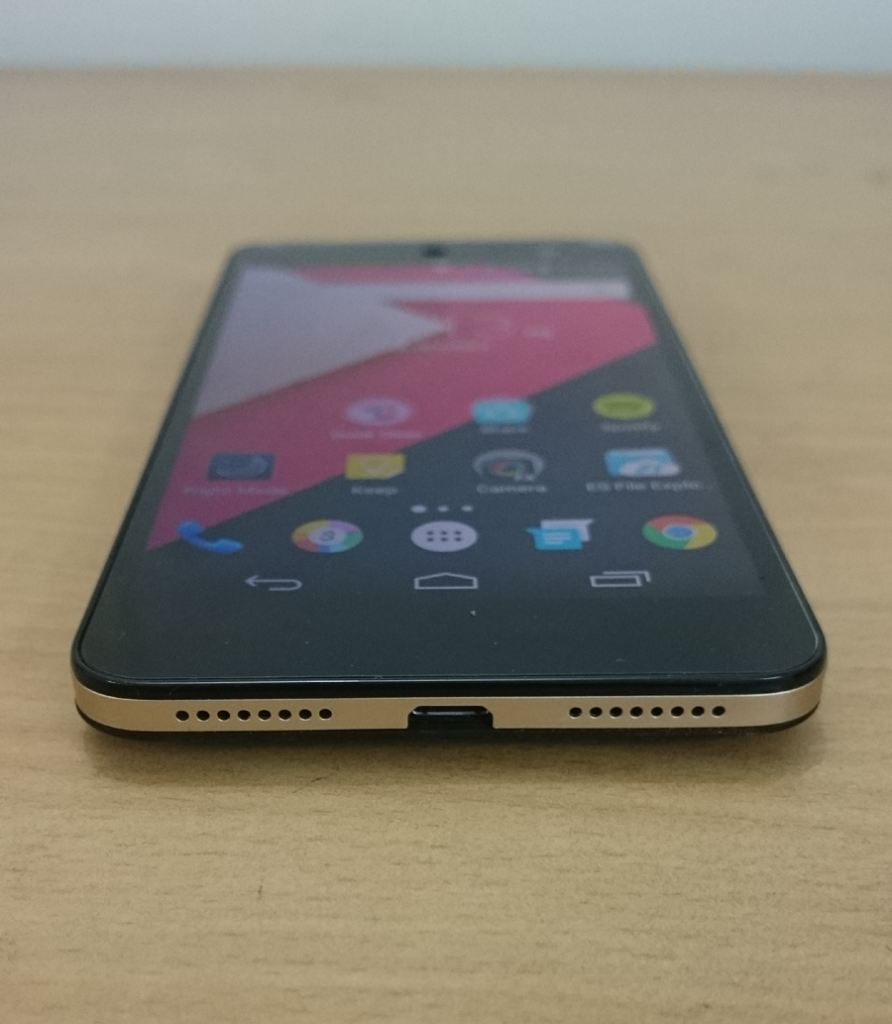 The phone looks good and it doesn’t feel cheap in the hand. The rims appears to be metallic but it is really some sort of golden colored plastic. The back cover is made out of a rigid smooth-to-touch plastic too. All the buttons are on the right side, easy to reach and quite clicky. The phone isn’t too heavy or too bulky for regular use. The screen on the other hand is amazing. There are no capacitive buttons on the phone and the front is covered with a single piece of Corning Gorilla Glass 3. In my opinion, that is the most appealing thing about the build of this phone.

Amazing Display with some minor quirks: 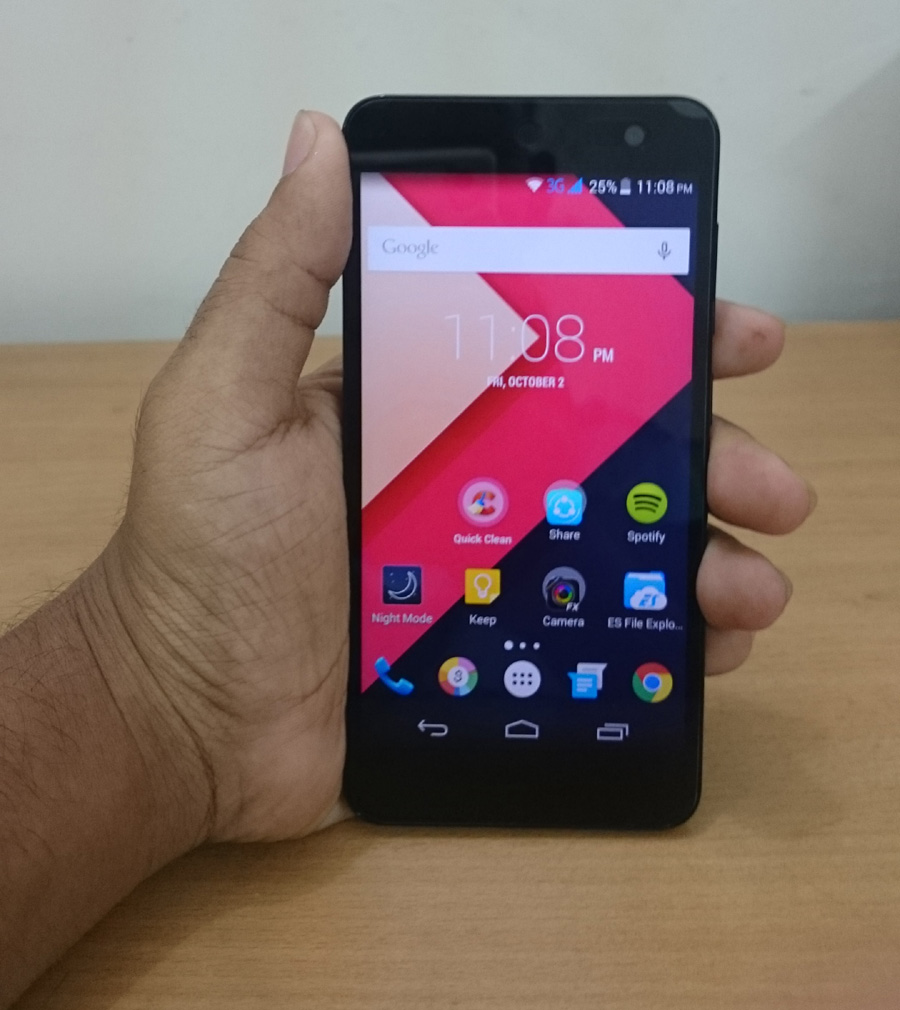 On the topic of screen, the phone features an amazing 720p 5-inch IPS screen with ClearMotion to enhance video playback. The viewing angles are great and colors are vibrant. On the bottom of the display are the onscreen android navigation buttons, which I adore. The screen is very good all in all. The touch response is really good, almost in par with much more expensive Samsung phones. If I had one complaint, it would be that the display isn’t bright enough for easy usage in direct sunlight and doesn’t get dim enough for eye strain free night usage. Fortunately the latter can be solved by simply downloading an app from the play store.

The phone houses a 2500mAh battery below it’s removable back cover. It lasted me a day with aggressive notification checking and some light YouTube and Spotify streaming. You need to manually disable some useless apps that are a huge battery hogs, like the default launcher. You wouldn’t be missing anything, the default launcher is ugly and I believe everyone would prefer the more sophisticated look of Nova Launcher over any default launcher. With my usage I consistently get around 4 hours of screen on time, and that is pretty much all YouTube video streaming. 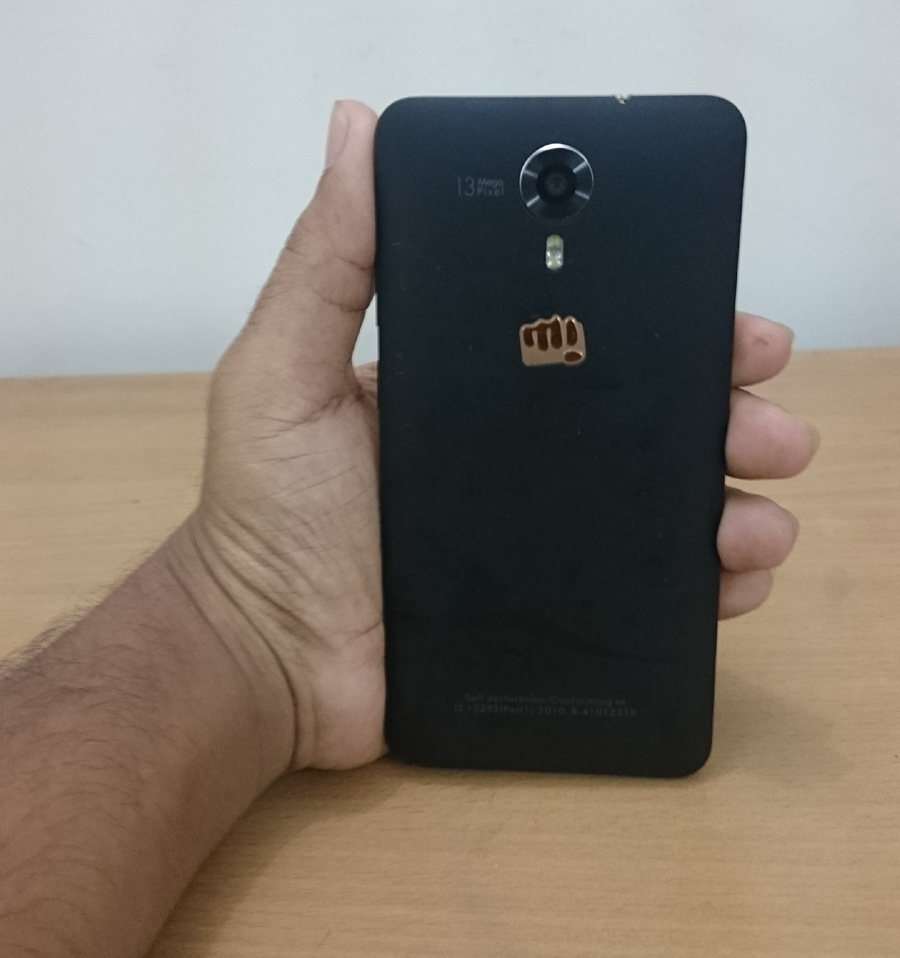 Again, the 13 MP back camera is just OK. It’s not amazing and it’s not bad by any means. I will be sharing some camera sample soon. The front camera is decent for my use, but obsessed selfie shooters should probably look for a phone with a better front camera. Video is quite good and the shutter time is really great specially if you turn on zero delay from the settings.

The Xpress 2 can produce some great sounds from the bottom firing speakers. The speaker being on the bottom of the phone makes a huge difference. The sound gets pretty loud and it is usually crisp. The headphone port is great too. With my Skullcandy 50/50 I got amazing sound quality, something I can not say about all phones.

Software – still too tender to play in the major leagues:

On the software side, the phone runs almost a pure build of Android 4.4 with a few Micromax customization in the settings app. Like the sticker says, the phone is upgradable to Lollipop and I’m sure Micromax will start rolling out the updates soon enough. The phone is LOADED with bloatware but the OEM deserves a huge thanks because all the bloatwares can be uninstalled without root access. You would probably want to remove 15 apps, change the launcher and keyboard right after turning the phone on the first time.

The phone runs relatively lag free. It can track your finger well enough thanks to the 8 core processor, and it does not heat up at all during prolonged normal usage. Gaming is not a strong suit for this phone. Almost all games are playable lag free on this phone in medium graphics quality. But playing games in medium just does not do the amazing screen any justice. Games like Subway Surfer suffers from minor lag sometime, but that is enough to crash into a train. If you are looking for a phone to do hardcore gaming, I’m not going to recommend this phone, but this is the best phone even for gaming at this price range. The hardware on paper seems to be strong enough to play games seamlessly, so I’m guessing the OS just isn’t coded well. Fingers crossed Micromax will fix this on the lollipop upgrade.

..It can track your finger well enough thanks to the 8 core processor, and it does not heat up at all during prolonged normal usage.

Overall discussion and things to note before buying:

At the end of the day, this is a great phone for someone in a tight budget. The little gestures by Micromax are appreciated, like the strong wifi chip and the great DAC in the headphone jack and OTG support. Call quality is great too. The camera could be better but I’m not going to ask for flagship performance from a 8k phone. Even running medium graphics game like Smash Hit and optimized game like Asphalt 8, the phone can give solid performance with very little to no lag and minimal heating. The RAM limits multitasking, but I didn’t find that to be too big a deal. The deal breaker for me is the 8Gb internal storage and the fact that you can not move apps to SD card right now. The lollipop upgrade is supposed to fix that and I will be waiting till then before I decide if I want to change.