So, Want to buy twitter followers ? Here’s a review

What’s the first aim for a business which has just started ? Reach out to the people as much as possible. With the existence of social media, promoting business has somewhat become very easy and also very effective to gain attention and recognition. The social media giant, Twitter, provides the perfect base to promote one’s business or as we bloggers do, promoting our  blogs.

Now comes the interesting part. The subject of the number of followers one has in a Twitter account.

It is obvious that more the followers, the better chances of getting your 140 character message around. Many services have sprung up where they offer to give you certain amount of followers for a reasonable price. For example, the famous Twiends which allows you to grow your followers by the form of having seeds. The free-service won’t help you much in getting followers but buying more seeds enables you to get more followers and hence more exposure. Another type of service such as SEOclerks, provides the users a platform to buy twitter followers from a number of providers who give different type of prices for the number of followers they will be able provide you.

Let’s have a scenario

For instance: Person ‘A’ has 12000 Followers which s/he recently bought and Person ‘B’ has 400 followers where s/he follows and gets followed manually.

So what advantage does Person A has over Person B ?

Person A has a lot of followers which means s/he has a larger amount than person B, no doubt. Having a lot of followers mean that your 140 character message will be circulated around these followers. In simple terms, your reach will be much greater than Person B.  A large network not only lets you increase your reach but also lets your messages to get retweeted, shared and may be even recommended to others. This allows you to also get automatically followed by others because of your attractiveness. More the exposure to your business, more the profit.
Traffic to your site will increase and also help to increase your sales.  More over, as a result of increase in traffic that person A will get from 120000 followers, it would also help to increase the rankings in the search engines. 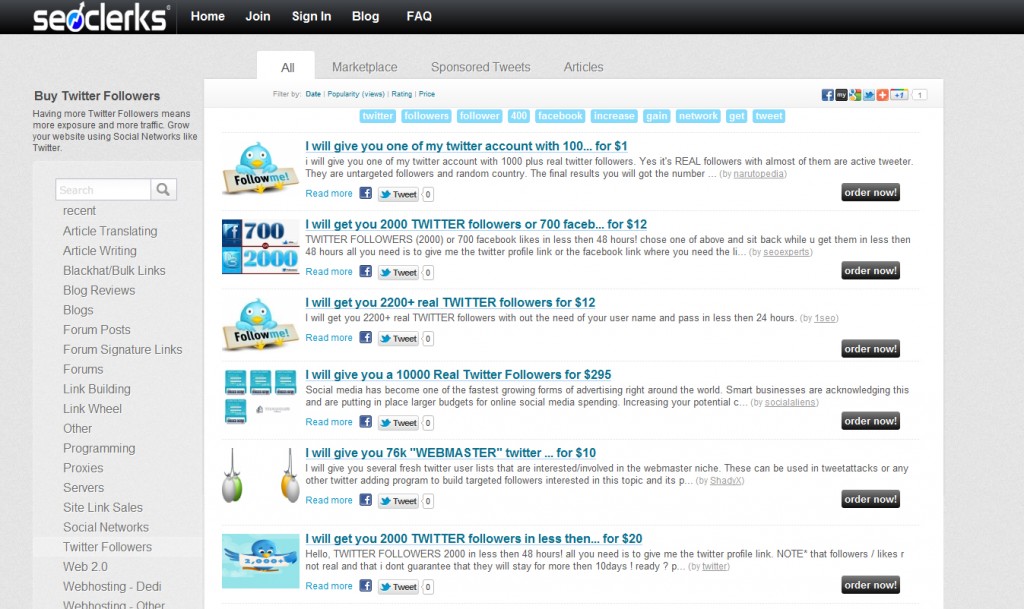 Now what can be the disadvantages ?

Now you might be attracted by the packages that promises you a ‘number’ of followers to your account but it should be noted that quality matters as well. There is no guarantee that those followers that you have are all ‘real’ people. Most of them might be just fake profiles. Therefore there are slim chances of your messages getting retweeted and even shared.
I have tried Twiends ( the free service ) and found out that at first, a huge number of people follows me but as the days go by, the number of followers starts decreasing and I was pretty sure those were the followers from Twiends.
Even if you have bought the followers, there is less chance of interacting with them. Would it be fruitful for your business then ? Not at all.
In simple words, buying twitter followers is a spammy tactic.

Person B on the other hand tends to have 400 quality followers where s/he has a great interaction with most of them. This not only allows the messages to get heard but also get referred to his/her followers’s followers! Person B would automatically have followers following him because of his great content and interaction with his friends on Twitter..

Discussing both the advantages and disadvantages, we can finally say that if you are willing to increase the number of followers just for the sake of the amount, buying twitter followers is for you. Moreover in short time, you will be able to get a  large number of followers which can be attractive. On the other hand, if you want to go for quality then buying twitter followers is not for you. Although some services may tell you they will be providing ‘real’ followers, there will be fake profiles in them. As we all know, slow and steady wins the race. Get to know your followers, interact and eventually success will flow in.

Hope this short review will help you in making a decision!