There were rumors of a surface desktop device for a while and Microsoft finally revealed what they have been cooking in their labs a few weeks back. The Surface Studio. Sporting a PixelSense 28 inch LCD monitor with a whopping 4500×3000 resolution. Not only that, the screen also has sRGB, DCI-P3 and P3-D65 profiles.

What does all that mean? Honestly, I have no idea yet but it must be good stuff right?

And did I mention the little puck? Microsoft is stepping up on innovation in their hardware game.

I was pretty excited to test out these devices and I finally got the chance yesterday at the Microsoft Store. On Black Friday nonetheless. Probably the single worst day to go to the mall. Well, I am still alive though so I can say that I braved Black Friday and did not get trampled to death.

First touch on the Surface Studio

In person the Surface Studio is drop dead gorgeous. The screen is one of the thinnest out there (I believe it might just be THE thinnest at 0.49 inches). And the hinge? Its stronger and smoother than I expected. Microsoft is terming it as the “weightless hinge” and it’s true to some extent. The display itself is 13 pounds but the hinge does a great job of holding the screen at whatever angle you set it at. Clearly the feature is aimed more towards digital content creators as the lowest angle sets up the Surface as a drafting table. I think the hinge is the clear engineering feat in this product. Smooth, stable and easy. Apple is no longer the only company who can claim, “it just works”. 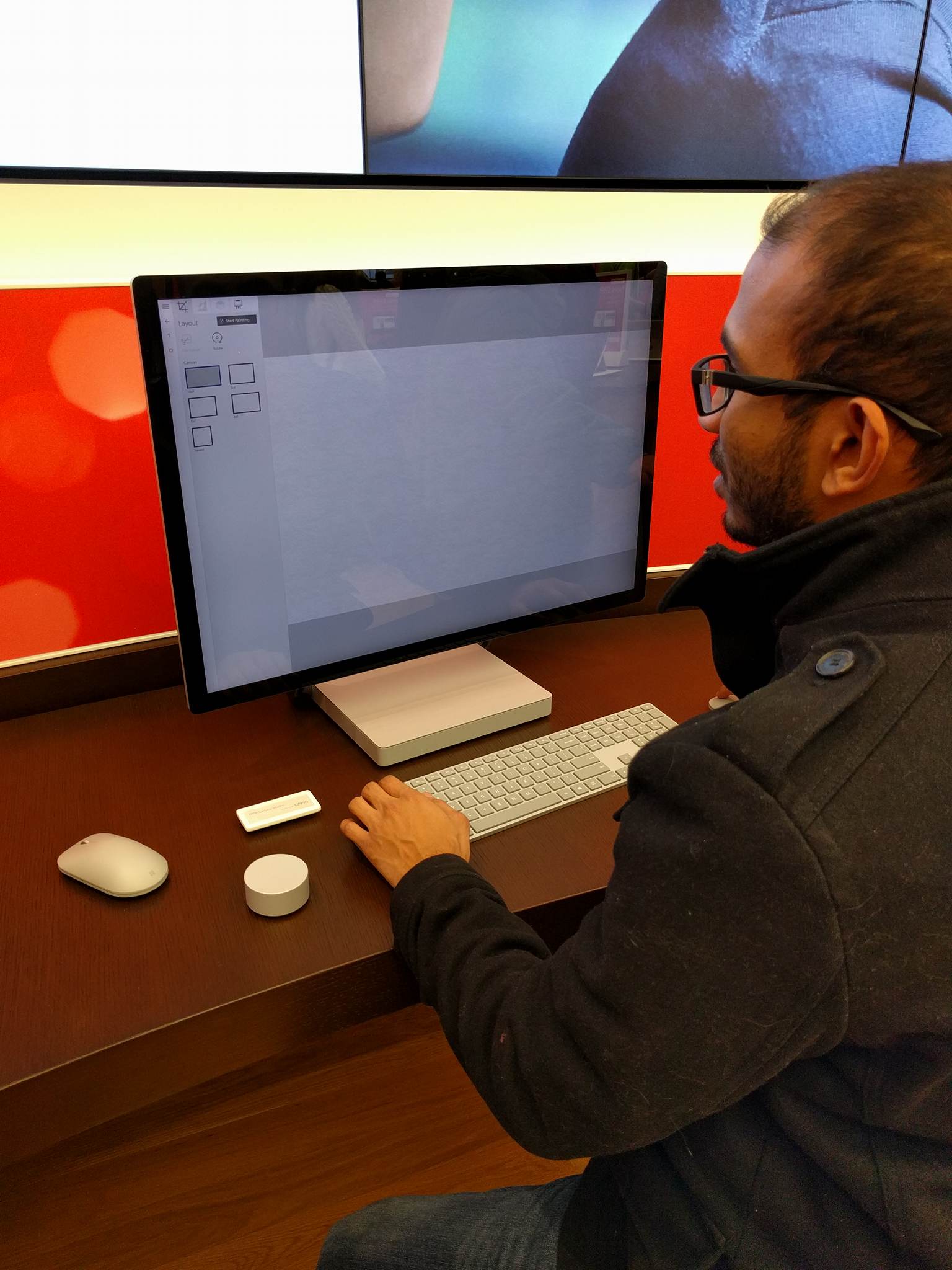 Even though the base of the Surface Studio feels hidden, I was pleasantly surprised at the port options. One single power cord in the center, four USB 3.0, full sized SD-slot, Mini DisplayPort (c’mon, ofcourse we need a crazy multi display setup), gigabit ethernet and a 3.5 mm headphone jack. Long live the headphone jack.

Specs of the Surface Studio

Specs wise, the Surface Studio I tested had the top of the line specs. i7-6820HQ, Nvidia GTX980M, 32GB DDR4 ram and hybrid storage of 2TB with a 128GB SSD. Those are blazing fast specs and definitely allows gaming due to the GTX980M. Then again these machines are not aimed at gamers but the option is there for you creatives who game.

Alright, now lets get to the Surface Dial.

I don’t think I got this excited and enjoyed using such a novel new input device. Granted, its usefulness is currently limited by software but the implications of its usage is impressive. The dial operates on two AAA batteries and connects via bluetooth. It twists with haptic feedback and you can even click it providing contextual actions depending on where you are and which app you are using. 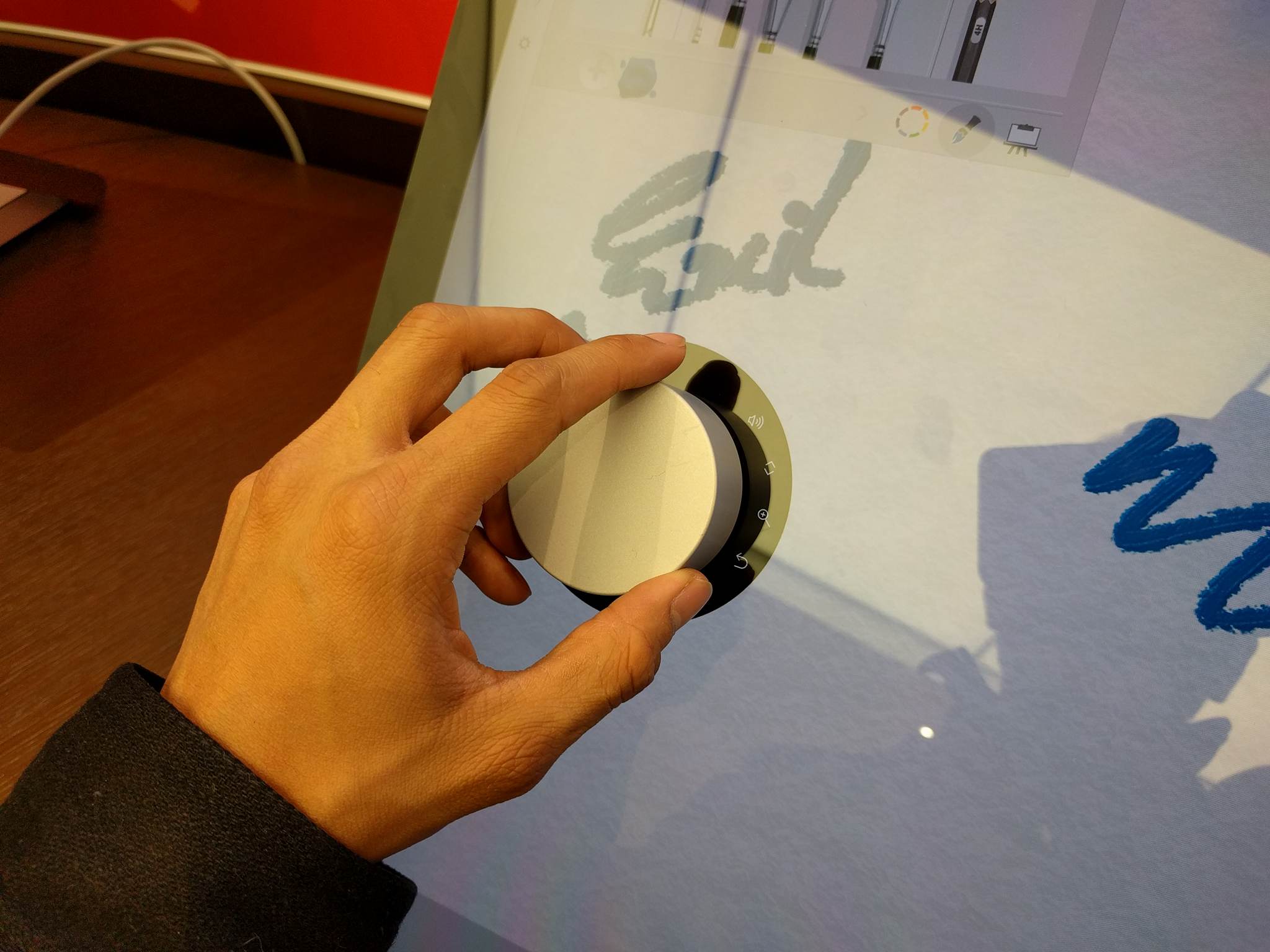 The best part of it? Using it on the screen itself.

Its almost a futuristic feeling. Place the dial anywhere on the screen and a circular dial UI shows up around it. Twist the dial and the options change. Its smooth, its clear and it just works. I used it mostly in a sketch app and you can zoom in and out, change brush sizes, opacity, brush types and color using the dial. Using it was a blast and felt natural. I am excited to see how third party developers build their software around it. 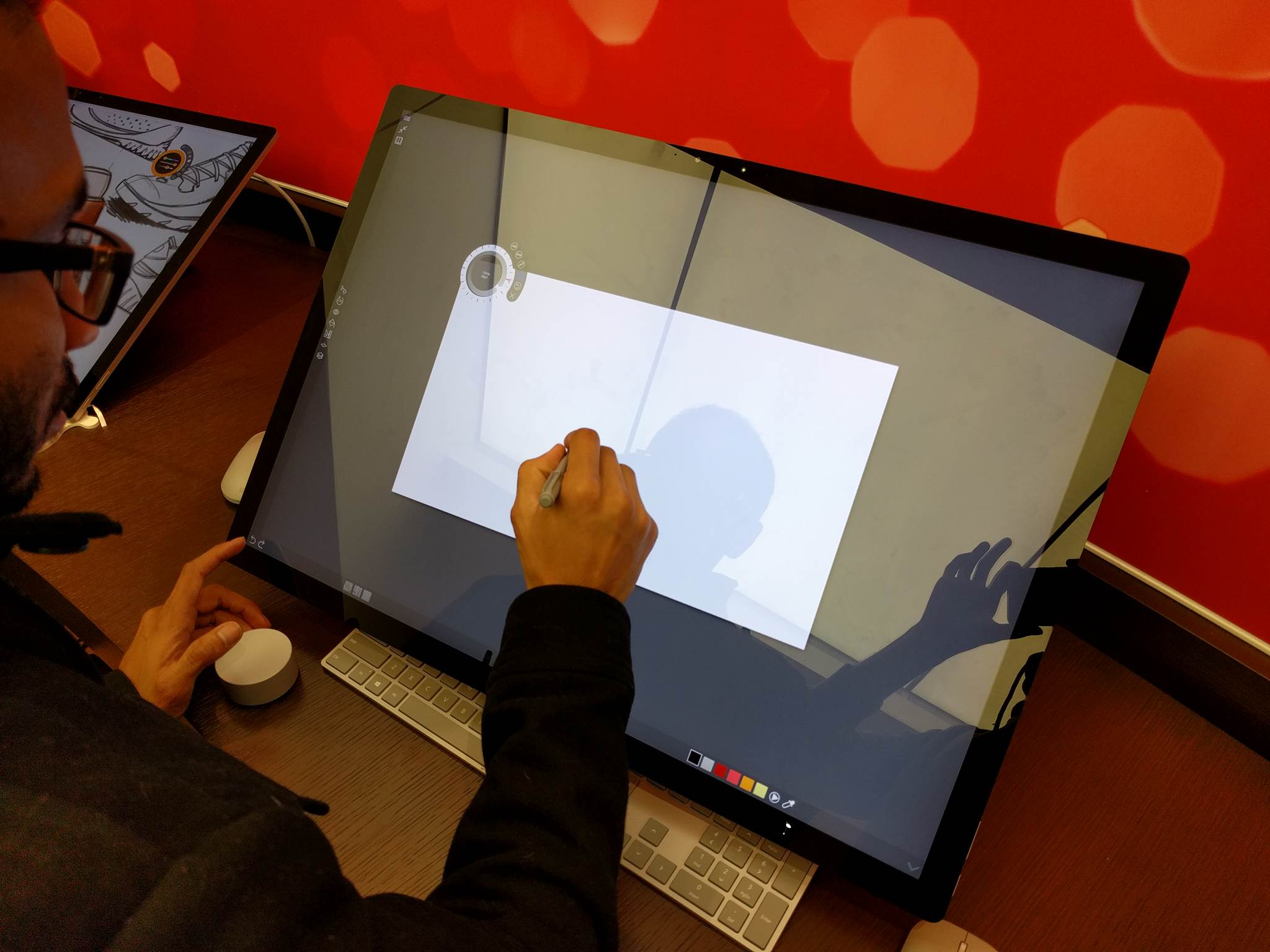 The Surface Studio is very expensive though, from the point of view of an average customer. It is a premium product and carries a premium price. It starts at $2999 and the one I played out with was topped off at $4200. Its expensive. But you are paying for a very well designed ergonomic and usable piece of hardware. And Microsoft is clearly flexing their engineering creativity and showing us how they are transforming into a leading innovative hardware maker.

I am excited to see how the introduction of such a premium device does spawn future siblings and other devices. My eyes are definitely on the Dial to see where it goes.