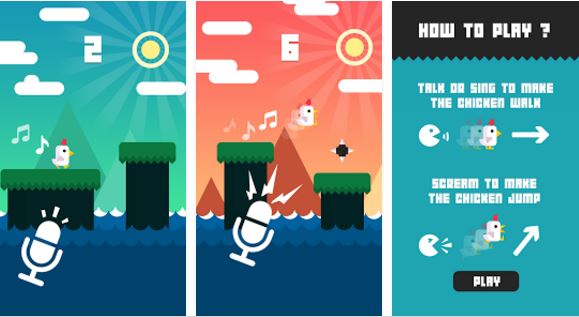 If you are bored playing games with same old concept that you control a character or an object using the touchscreen or motion sensor of your smartphones, then chicken scream is the game you need to play. The game is a refreshment for the ‘smartphone-gamer’ who always plays games on their cell.

The aim of the game is simple. You have to make a chicken move forward from one place to another. To do that you have to do two things. Either you can make the chicken walk or make it jump. You have to walk on the walls and jump over the obstacles and the gap between two walls. The chickens are terrible swimmers. Therefore, you cannot let them fall in water. By doing so you will earn points. The game has two modes- Classic and adventure. In classic, one has to dictate the chicken forward and he will earn points by collecting the coins coming in its way. In adventure mode, there are few levels and each level tells you to earn a fixed amount of points by passing the obstacles. Using the points earned, the different chickens can be bought and used.

After such a huge description of the game if you are wondering how to play the game, you can get an idea from the name of the game. You have to use your voice to play. By talking to the chicken or making very mild noise, the chicken will walk. By screaming at the poultry, one can make the chicken jump in order to cross the obstacles. If you are talking mildly but still the chicken is jumping, there is an option to increase or decrease the noise sensitivity.

Though the game has a different concept and can make anyone addictive to it, there are some drawbacks of the game. As constant talking and screaming is needed in order to play the game, this game cannot be played at a public place. Besides, your vocal cords might also start hurting due to playing the game. In addition, the irritation it might cause if the chicken is not responding properly needs no say. The game which somewhat matches to the concept of Flappy Birds is quite addictive and enables the user to use a different kind of control which makes the game perfect to play. Developed by Perfect Tap games, the game requires no in app purchase, which also enables every user to explore all the features of the game. Besides all these, the most exciting thing about the game is that, it will encourage more game developers to use different mode of controls while making a game and will ultimately entertain the users.