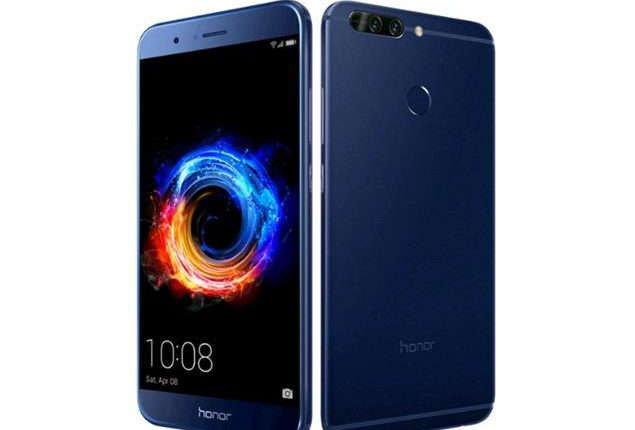 
Yesterday, Huawei announced a new phone of its Honor series, the Honor 8 Pro in India. The phone has everything it need to feature as a flagship smartphone. It packs a dual camera setup, a 4000mAh battery and 6GB of RAM for multitasking. Another cool feature it has is the DIY Google Cardboard viewer included with the box.

Honor 8 Pro is available in two color variants namely Navy Blue and Midnight Black. It also comes with a fingerprint scanner for additional security located at the back of the device to unlock the phone.

The phone is available at Rs. 29,999 for the 6GB RAM variant along with 128GB of inbuilt storage. At the price point, it goes ahead than the OnePlus 5 as that retails at the Indian market for Rs. 32,999 and it only has 64GB internal storage and the same RAM.

The dual-SIM (hybrid slot) phone runs Android 7.0 Nougat out of the box. But one won’t be able to experience pure android as it comes with EMUIO 5.1 skin. Though it isn’t the clean android a lot of people expect but the interface is user friendly and nice to look at. The phone sports a 5.7 inch QHD (1440×2560 pixels) LTPS LCD display with Gorilla Glass 3 protection which is better than the 5.5 inch Full HD (1920×1080 pixels) display of the OnePlus 5. Its own processor named HiSilicon Krinin 960 (4 Cortex A-73 core at 2.4GHz and 4 cortex A-53 cores at 1.8GHz) powers the Huawei Honor 8 Pro. Though a lot of people can’t relate it to the Snapdragon Processors and can’t calculate how much powerful it is but tests show that the processor falls somewhere in between the Snapdragon 821 and the Snapdragon 835 which means it is more powerful than the OnePlus 3T and almost equally powerful as the OnePlus 5. It also packs 6GB of LPDDR4 RAM which is one of the best in the market right now.

The camera doesn’t fall behind the current flagships. It comes with a dual rear camera setup which consists of two 12-megapixel sensors with f/2.2 aperture, laser autofocus, LED flash and 4K video recording capabilities. The dual camera functions almost in the same way as the P10 did. One sensor captures the image in RGB while the other captures in monochrome or as most people like to call it ‘black and white’. For selfies and video calling, the phone comes with an 8-megapixel sensor with a 77-degree wide-angle lens. Though the camera setups are different from the OnePlus 5 but it does pretty good to be compared with the phone. In some cases, the pictures might exceed the shots from the OnePlus 5.

The phone has a hybrid sim slot which means one won’t have to remain stuck with the ‘small’ 128GB internal storage like you have to if you bought the OnePlus 5. If they want they can expand it via microSD card upto another 128GB. The phone has the features of recent flagships like dual-band Wi-Fi 802.11 a/b/g/n/ac, USB Type-C, Bluetooth v4.2, 3.5mm headphone jack, and NFC. It features a huge 4000mAh battery will be more than enough to last for a day and sometimes even more.

Huawei has shown that through aggressive pricing, it can now compete with some of the market leaders also. With its great features and affordable pricing, the phone can be great choice for tech enthusiasts looking for the features rather than the brand. The only thing which we can expect now is that it comes to Bangladesh soon and the smartphones users in this country can enjoy the phone as well.