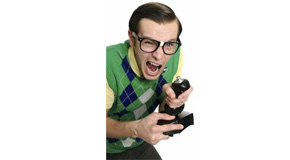 
Those who are regularly condemned by parents or loved ones for spending lengthy periods of time sitting in front of a computer screen pretending you are a seasoned war veteran or scoring a goal with a virtual Wayne Rooney, may find recent scientific research defying the long held myth that video games can damage your eyesight to be particularly helpful in any potential arguments.

Those who consider first-person shooter war games such as the Call of Duty or Medal of Honour franchises amongst some of their favourite games may be particularly interested to hear that research lead by Daphne Maurer, of McMaster University in Canada suggests that playing such games may actually help to improve eyesight deficiencies in people with certain eyesight problems.

The study involved six people with diagnosed cataract disorders, a clouding of the eye which develops in the lens capsule or crystalline lens of the eye, with varying degrees of opacity. Each patient was ‘forced’ to play Medal of Honour for forty hours over the span of one month. Only two hours game time was allowed each day to prevent addiction, with the idea that war games such as this require a heightened response of eye movements, with frenetic action taking place throughout often needing an acute sense of visual awareness, tracking multiple movements and objects in order to not become virtually deceased.

The remarkable results from the experiment showed that 5/6 of people tested reported improved vision; with enhanced facial recognition found to have improved amongst further enhancements shown in eye sight in two thirds of areas tested post experiment.

Reasons for the surprising statistics

It is believed that playing such games increases levels of dopamine in the system, with increased brain activity allowing for more accurate eyesight to pick out subtleties in the visuals displayed. The success of this experiment has now lead Maurer into researching ways of creating non-violent video games with characteristics to also improve eyesight.

This study has lead to the previously unthinkable notion of placing ‘may cause improved eyesight’ on the back of certain games packages, rather than the mandatory warnings usually attributed to the video game entertainment form. If you are looking for an excuse to continue fighting the virtual battle, point out this article next time someone says you need to stop playing and go outside into the real world.

Jamie writes for prescription glasses retailer DIrect Sight and likes to keep up with the latest technological developments.