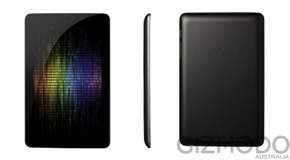 
Google’s I/O Conference, the annual developer conference, kicks off this June 27th with the possibility of releasing its very own tablet, possibly named the Nexus 7. Around last December, Eric Schmidt, Executive Chairman of Google, in an interview with an Italian Daily discussed about the possibilities of Google’s tablet. The most attractive feature of the table till now is the price. Google promised to offer a great high end tablet at an affordable price.

What is the future, for example, of his profession, journalism. But our companies compete, you compete. We in the next six months we plan to market a tablet of the highest quality. And in mobile communications, the smartphone market, you will see brutal competition between Apple and Google Android. It is capitalism. —Eric Schmidt

UPDATE : Google Nexus 7 has been officially unveiled with the same specs previously discussed !

According to a recent report by Gizmodo Australia, they have somehow read a training document where the details of the upcoming tablet has been mentioned. However there has been no image or any access to that training file. For now till the possible release, what ever information you will be receiving is just a rumour.

The specs that the tablet offers according to the training document, is way enough for anyone wanting to own a tablet at a very low price compared to all the other pricey tablets ! The display screen is said to be about 7 inches with a screen resolution of 1280×800, 1.3 GHz quad core Tegra 3 processor, Geforce 12 core Graphics Processing Unit and a RAM of 1 GB. More over, it will be having a front face camera of 1.2 megapixels and will have 9 hours of time for operating the tablet. The tablet is to come out in both 8GB and 16GB.

The 8GB device would cost around $199 whereas the 16GB one around $249. Manufacturer- ASUS

The most important information out of all the rumours about the tablet is that its the first device ever to run the next operating system of Android, JellyBean.There’s no mention of the version number yet but its more likely to be 5.0

UPDATE: Android JellyBean 4.1 is going to run on Nexus 7

There are also rumours about Apple’s 7inch iPad already in production to fight head to head with Nexus 7. Moreover Kindle Fire will be having a tough time to cope up with the competition that will take place between the two big daddies.

Let’s say the Nexus 7 is released and you have two choices : a) iPad or the b) Nexus 7. Which one would you buy ? I guess I already got your answer.

Share your thoughts below. What do you think about the tablet ?