Symphony, the arch rival of Walton, is becoming widely popular and releasing very reasonable Android smartphones and tablets to the public here in Bangladesh. Though these are speculated to be Chinese products which are just ‘re-branded’, it doesn’t matter as long as the products provide great service to the users.

Since Symphony has already established itself in the mobile phone market, they are now looking forward to conquer the local tablet market. The first wave of tablets Symphony released were the T7 and T8 versions. Although with very low-end specs, it provided the 3G feature which attracted a large base of customers. The main difference between the T7 and T8 is the screen size, T7 – 7inch and T8 – 8inch. Before selling it in retail stores, Symphony partnered with Grameenphone to sell the tablets in an attractive package. 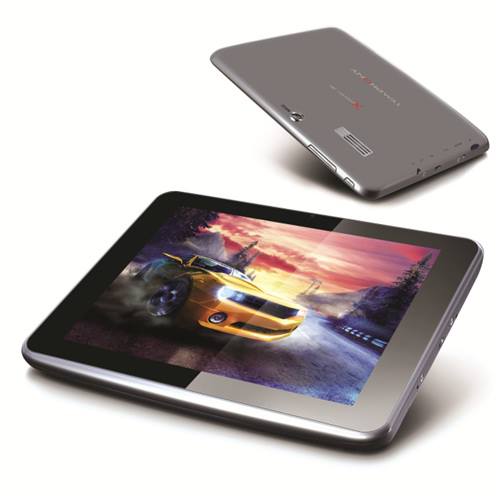 Symphony  unveiled  their upcoming tablet, T8i. By the name, it is easy to tell that this is just a revamped version of the predecessor, Symphony T8. Though it is disappointing to see the tablet running on the late Android 4.0 ICS, it will have the 3G and WiFi data service option which can be one of the reason for the consumers to smile after procuring the product. The tablet has an 8-inch IPS XGA Capacitive Touch screen with a resolution of 1024 x 768 similar to the previous and sports the same dual core processor clocked at 1GHz powered by 1GB of RAM.

Around the back, the Symphony T8i has a 5MP Camera with a 2MP one at the front, a notable upgrade from the previous which had a poor 2MP camera.

The battery unit has also been upgrade slightly to 4700 mAH enabling the tablet to have a  standby time of 600 hours and a talk time of 6 hours, all depending on the network usage.

The price hasn’t been mentioned yet but the previous price tag for Symphony T8 was Tk 12850 so we can speculate the price to be a bit higher.

Let us know your thoughts on this upcoming tablet!

Get Productive with Timesaving Shortcuts for Gmail