To please the elites in the upper echelon, unique products have to be made to make them feel special from the rest. If they are a gadget freak, they wouldn’t even question themselves before buying. Like it? Buy it! There are instances when they would want to stand out and for them, such smartphones and tablets made from expensive metals, decorated with special stones along with crocodile leather and other precious materials exist. 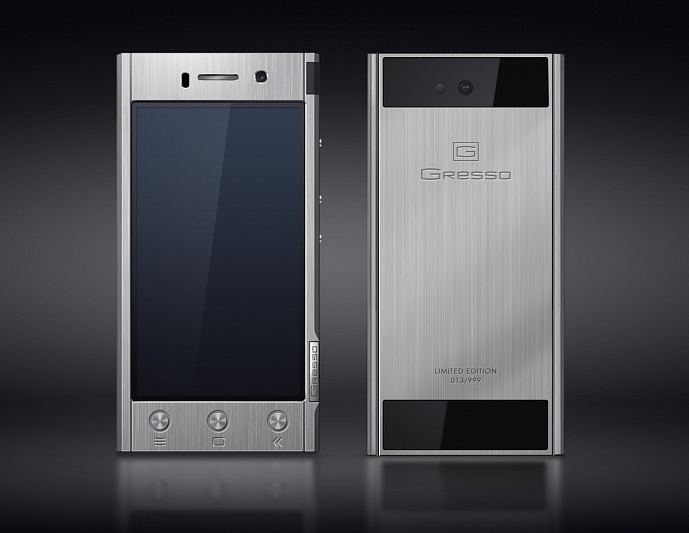 We have all seen Stuart Hedge’s expensive gadgets where he dresses up the existing smartphones/tablets with gold, diamonds and also goes far by adding a tiny bit of a T-Rex bone. Now, we have Gresso, known best for producing smartphones with exotic materials releasing their first ever smartphone, the Radical R1. Before stating the technical specifications of the device, let’s have a look at the materials used to craft this device.

The whole case along with the back cover is made of grade 5 solid titanium. The titanium logo of Gresso has been manually polished and even the sensor keys are titanium material. The best part, all the 999 pieces have been manually assembled. What’s so awesome about a phone engraved in titanium? The titanium alloys are normally used in aircraft, helicopters, ships and missiles. If you are looking forward to it, you’re basically owning a device which holds the same material that has been used to produce the structure of the SR-71 Blackbird.

The downside of such extraordinary device is that they don’t come with the specs that you expect it to have. With such high price, it is normal to expect the specs to be very powerful. However, such is not the case. With a 4.5-inch qHD screen, the Radical R1 is powered by a quad-core 1.2GHz processor and has 36GB internal storage. It runs on the very late Android 4.1.2 and has a normal 8MP camera.

Want to own one of the 999 pieces? Head over to their official webpage to get one!

It’s been quiet awhile since Qualcomm announced their first 64bit chipset. After the announcement the chipset got little…
byEhsanul Haque Nitol

Nokia X, which was released in Mobile World Congress 2014 will finally hit the market today here in…
byNahian

ASUS brought its A game to Computex 2016 and unveiled a trio of new smartphones: the Zenfone 3,…
byAlavi Wahid

Back at Google I/O, the tech giant announced its new android one line and promised it will be…
byAlavi Wahid
1 share
1
0
0
Total
23
Share
23
0