Technology world is yet to witness another big takeover between two giants Lenovo and Motorola. Lenovo group, a multinational Chinese electronic gadget manufacturer is going for another takeover after its first takeover in 2005, which proved to be a money spinner for them after they took over the PC giant IBM.

Lenovo’s latest take over is the Motorola company who had once been a major mobile phone manufacturing company but couldn’t succeed much in the recent times.

Tech giant Google first acquired Motorola in 2012 for 12.5 Billion US$, this time Lenovo is acquiring them for a mere $2.91 Billion, much less than what Google had acquired them for.

One reason why Motorola wasn’t much benefited from this takeover was because they were never given an extra hand by Google for integrating Android better into their devices. They had the same privileges as their competitors Samsung, LG, HTC and all the other companies had. 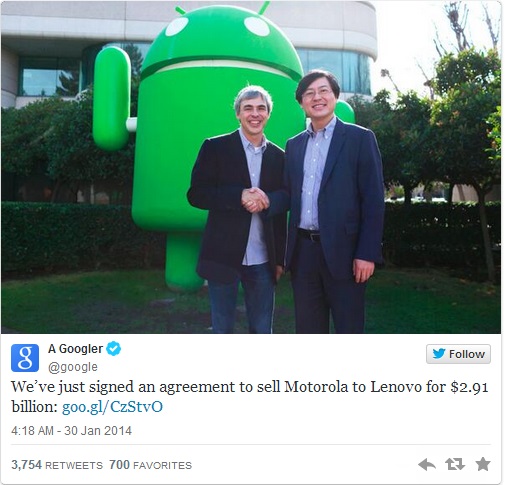 It wasn’t much of a deal that would integrate Android into Motorola phones better, like iOS is integrated with iDevices to give superior performance, rather it was a deal mainly made to get the petitions that Motorola had. Motorola did not get any support from Google for market expansion and was always like a company running independently of itself.

This however would not be the case when Lenovo takes over. Lenovo is very much interested in its mobile phone market expansion and taking over its current market of Motorola in US. Their clear goal is to reduce cost of production and expand their market to US and North America. Motorola had been struggling as a mobile manufacturer in the last couple of years and Lenovo never got its place in the US markets, they however have a strong market in China already. There merger seems to be the perfect decision in the perfect time.

Here’s what Google had to say in their blog regarding the merger:

The purchase price is approximately US$2.91 billion (subject to certain adjustments), including US$1.41 billion paid at close, comprised of US$660 million in cash and US$750 million in Lenovo ordinary shares (subject to a share cap/floor). The remaining US$1.5 billion will be paid in the form of a three-year promissory note.

Lenovo, which in 2005 acquired IBM’s PC business and its legendary PC brand, will now acquire world-renowned Motorola Mobility, including the MOTOROLA brand and Motorola Mobility’s portfolio of innovative smartphones like the Moto X and Moto G and the DROID™ Ultra series. In addition to current products, Lenovo will take ownership of the future Motorola Mobility product roadmap.

Google will maintain ownership of the vast majority of the Motorola Mobility patent portfolio, including current patent applications and invention disclosures. As part of its ongoing relationship with Google, Lenovo will receive a license to this rich portfolio of patents and other intellectual property. Additionally Lenovo will receive over 2,000 patent assets, as well as the Motorola Mobility brand and trademark portfolio.

For other mobile phone manufacturers this might mean a strong competition coming up. Samsung the biggest mobile phone manufacturing company might not actually be that threatened by this merger, as Samsung mainly focuses on the high end mobile market. But other manufacturers like LG, Nexus, or even HTC might get a heat from the new merger as they mainly focus in the low and mid range phones. That is if Lenovo continues to make mid range phones with low price tags like Motorola had been doing in the recent times, Moto G for example was a bang for the buck, thought it didn’t receive as much success as it should have.

This merger might actually turn out to be good for both Lenovo and Motorola and for consumers too. For Lenovo this deal means market expansion and lowering cost of production, for Motorola it means support from a tech giant in times of struggle and for consumers it means higher competition among mobile phone manufacturers and thus resulting in better and cheaper phones for them.

Hello smartphone user! It is so good to find you here on this article of mine, please do…
byAlavi Wahid

We are living in extraordinary times. As we see massive growth in advanced technologies like artificial intelligence, Internet…
byMushfiqur
1 share
0
0
1