After conquering the local smartphone market in Bangladesh, Walton aims to go even further by adding HDTVs and Smart TVs in their product lineup. The W42E68S is Walton’s first ever Smart TV and features a a 42-inch Full HD Display (1920 x 1080 resolution). 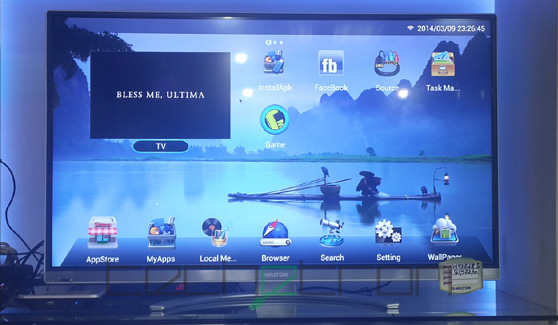 Let us take you through the features that we have experienced while spending some time with the Smart TV. When interacting with the TV, it was better for us to forget comparing Walton’s Smart TV with notable brands such as Samsung, Sony and others. Truth be told, those big brands have way better features than Walton’s.

The dashboard looks fairly simple with the a video box on the left and the options at the top and bottom. The display seemed to crisp and sharp when we watched a clip from Ice Age. When you’re on the dashboard, there are options where you can go online, play games and even install your favourite apps manually. Since it’s an Android TV, we expected to see Google Play Store app where it would be easier to download the apps. Connectivity includes normal cable TV, AV1 AV2 port, PC Component or an HDMI cable.

For now, there aren’t many apps pre-installed in the TV. There’s a Facebook and Game Center app where you would be able to download games and play. The in-built browser worked well but of course as we are habituated using Google Chrome or Firefox, it felt a bit strange. For typing, you can either type from the remote that provides a QWERTY keyboard on the other side or simply use it to click individual buttons on the screen. Typing with the in-built keyboard on the remote seemed to work quite well and was comfortable to use. By using the remote, scrolling was responsive and we did not face any sort of lag.

With no apps pre-installed, Walton made sure it had the Facebook app up in the TV. In our perspective, there wasn’t any need of the app as the user would prefer accessing it from the browser. There are users who love using the app instead so this might be a very good addition for them. For installing apps of your choice, you would have to manually download the APK file and then install it via using a storage device (pen-drive). Of course, it has the provision for playing your favourite movies directly from a tablet or a smartphone! [slider crop=”yes” slide1=”https://www.techetron.com/wp-content/uploads/2014/03/waltonz.jpg” slide2=”https://www.techetron.com/wp-content/uploads/2014/03/asds.jpg” slide3=”https://www.techetron.com/wp-content/uploads/2014/03/WaltonSmartTVsettings4.jpg”][/slider]

The Smart TV can get access to the cyberspace by either through Wifi or an ethernet. There are many ports at the rear, 4 USB ports, MicroSD port, LAN IN, PC Port and the other traditional ones.

Apart from the added features, the TV…works like a normal HDTV. If you want to do more than just watch your cable, then do consider buying a smart TV. What’s more interesting is that Walton has already announced another amazing addition to their TV lineup, a 4K Television which would be released soon.

Nokia is on fire! First, they released the Asha 501 then it was the Nokia Lumia 928 for…
byMushfiqur
One comment

How Much Malware is Out There? [infographic]

Online information security is becoming a huge issue throughout the world. That’s probably why new companies are springing…
byMushfiqur
6 comments