What you are seeing below is the picture of an unannounced Motorola smartphone, the Moto E.

Thanks to a Brazilian retailer, the Moto E has now been fully revealed with a list of specs which, according to them, are 100% accurate.

The new Moto E sports a 4.3 inch display and is expected to have a 720 x 1280 resolution. The device will be armed with a 12GHz Dual Core Qualcomm Snapdragon processor, 1GB RAM, 4GB of internal memory with microSD support (upto 32GB) and a 5-megapixel rear camera without flash. Unfortunately, there isn’t any front facing camera, so no selfies!

According to the report, the dimensions of the device are said to 124.8mm x 64.8mm x 12.3mm weighing only 140g. Although it shows the thickness to be around 12.3 mm, it beats down the rumors that the upcoming Moto E would be only 6.8mm thick! 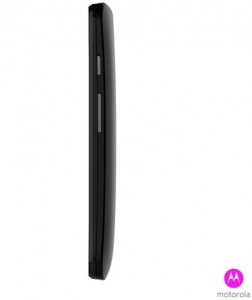 The Moto E will most likely have three different models: XT 1025, XT 1021 and XT 1022 which is thought to be a Dual SIM plus digital TV, single SIM and Dual SIM version.

The phone will be running on the latest Android 4.4 Kitkat and will feature only 3G connectivity and Wi-Fi and have a 1980 mAh battery on board.

Similar to the Moto G, the new Moto E will also have exchangeable Motorola Shell which comes in different colors. The new device would be announeced on May 13th as a device that is ‘priced for all’.

We, here at Techetron, are expecting it to carry a price tag of $99 which would be a great buy for those seeking a low-end device for a rough use!

Samsung finally surpassed the sales of Apple phones this year after the launch of the Samsung Galaxy SII.…
byGuest Blogger
1 share
1
0
0
14 comments

You may not realize it, but over the years scientists and engineers have made astounding discoveries and uses…
byMushfiqur
8 comments

Once again, we have been bombarded with 4 new budget friendly Walton smartphones that are currently being sold…
byMushfiqur
1 share
1
0
0
No comments