Last summer, at their yearly earnings call, Blackberry announced their most radical phone yet. Blackberry finally released the Passport on Wednesday and it is retailing in five markets worldwide. The name Passport comes from the fact that the phone is in fact shaped like a passport, all wide and tall.

One of the phone’s notable features is its incredible 4.5” square screen which boasts a resolution of 1440×1440 pixels giving a pixel density of about 453 ppi. In comparison, the HTC One M8 only has a ppi of 441 and the iPhone 6 Pus with a 401 ppi screen. Blackberry claims that their wide screen can view 60 characters in a line which makes it suitable for reading emails, browsing the web and viewing spreadsheets. 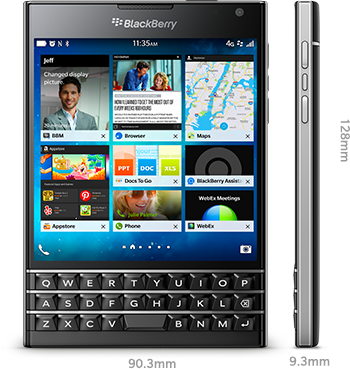 The phone comes with the good old trusted Blackberry keyboard which is one of the things that make Blackberry what it is, but from looking at it, the keyboard isn’t quite what one would expect. Gone is the keyboard where your hands simply wrap around your fingers. This keyboard is wide, like the phone, and typing would feel uncomfortable unless you are using both hands. However, the Blackberry Passport’s keyboard features aren’t skin deep.

The keyboard has a capacitive sensor underneath which allows users to scroll webpages, flick through pages so you can control your phone without having to stretch up to reach the touchscreen. Blackberry Passport comes with Blackberry OS 10.3 which comes with Blackberry Assistant, Blackberry’s rather late response to Siri. Blackberry claims the Passport’s speakers to be the loudest and clearest among any smartphone out there, including the HTC One M8 with its BoomSound speakers.

Microsoft revealed their new OS, Windows 10 in an event held in San Francisco and the only question…
byMushfiqur

After many rumors and a long wait, Xiaomi has finally launched their budget Redmi Note 4 smartphone in…
byAlavi Wahid

Apple is known for its obsession to detail. It shows in their products, beginning with design and ending…
byRajiv Ashrafi
Total
7
Share
7
0