If you ask people what their main requirements are for a smartphone, most times the answers will come back homogenous. In developing nations like Bangladesh, this is even more true. People here want a good reliable smartphone which is fast, has a decent camera and most importantly is affordable. Any other extras are bonuses for the end user and help to enhance the user experience and boost customer satisfaction. Walton has been playing at this game successfully for a while and their Primo S3 is another piece is this system. 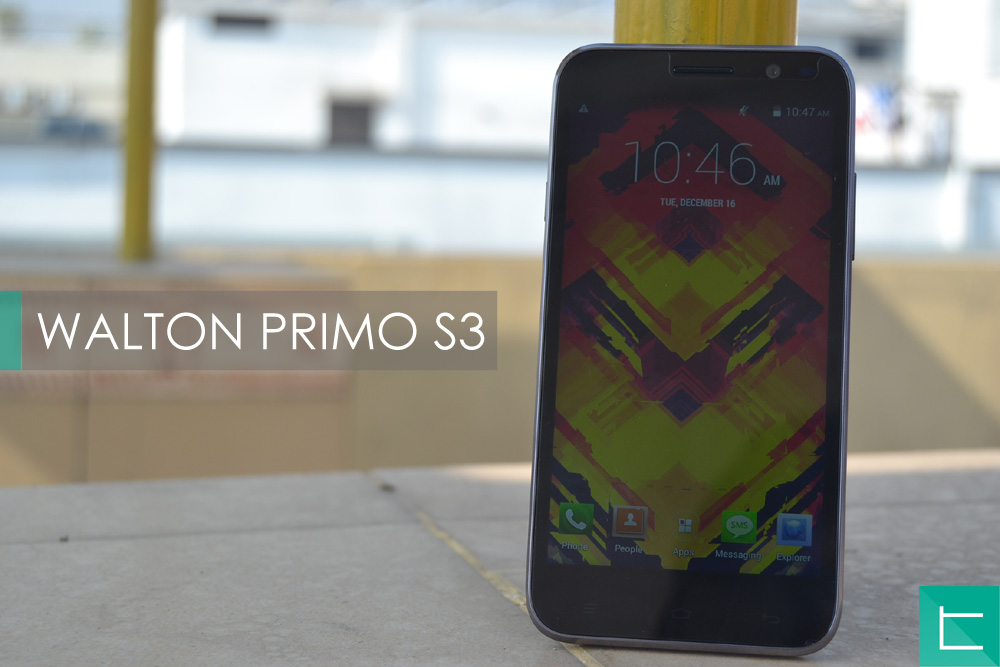 The Android market now is seeing many changes, large manufacturers like Samsung are losing our significant market share to smaller companies who provide similar if not better devices at a lower price point. The Primo S3 is an example of such a device. The S3 retails for Tk/- 16,390 or approximately $210 and for what it offers on the spec sheet, it is outrageous.

The Primo S3 is one of Walton’s better designed smartphones. It resembles what many may call the classic Android design and we love it. There is nothing too flashy about the design, it is simple with a few additional touches here and there like the slightly tapered edges around the display and the small nubs beside the speaker which keep the sound from getting muffled. A metallic band goes around the entire device mimicking a brushed metal finish similar to what we find on many Samsung products. 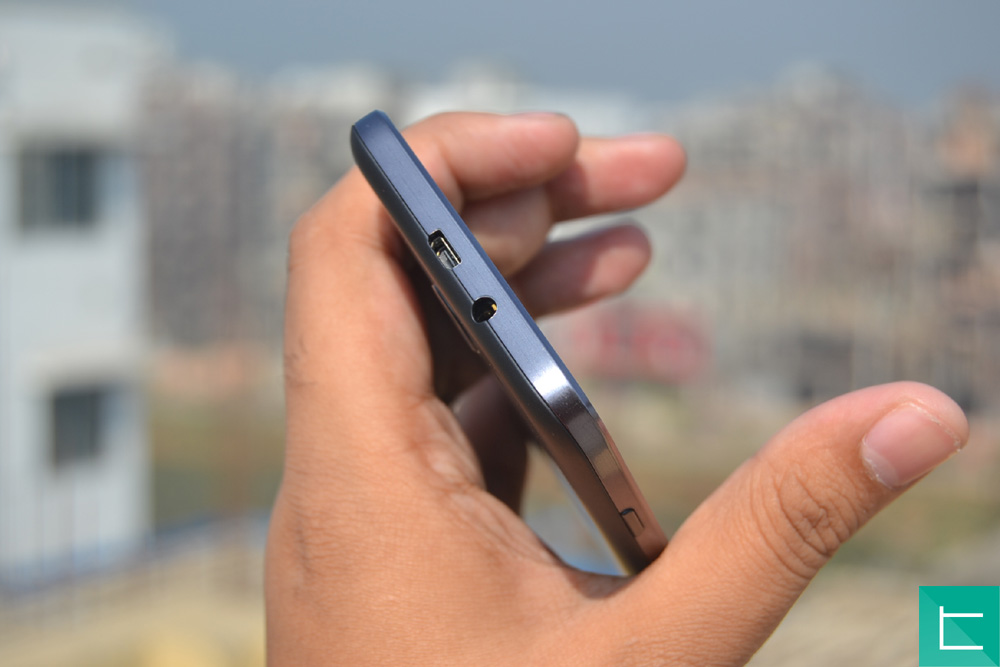 Just beyond the faux-metal band, the removable back plate curves slightly so as to rest comfortably in the palm. This combined with the flat sides makes gripping the device a piece of cake. Even with a 5 inch display, the S3 does not feel big in the hand. The matte texture on the back plate does not readily attract fingerprints which is always a plus.

Walton placed the volume keys on the right hand side whilst placing the power key on the left. This configuration is seldom seen but it does make accessing the required keys much easier as often times people accidentally hit the volume keys instead of the power key or vice versa. The keys themselves are positioned well within reach and are a bit squishy. 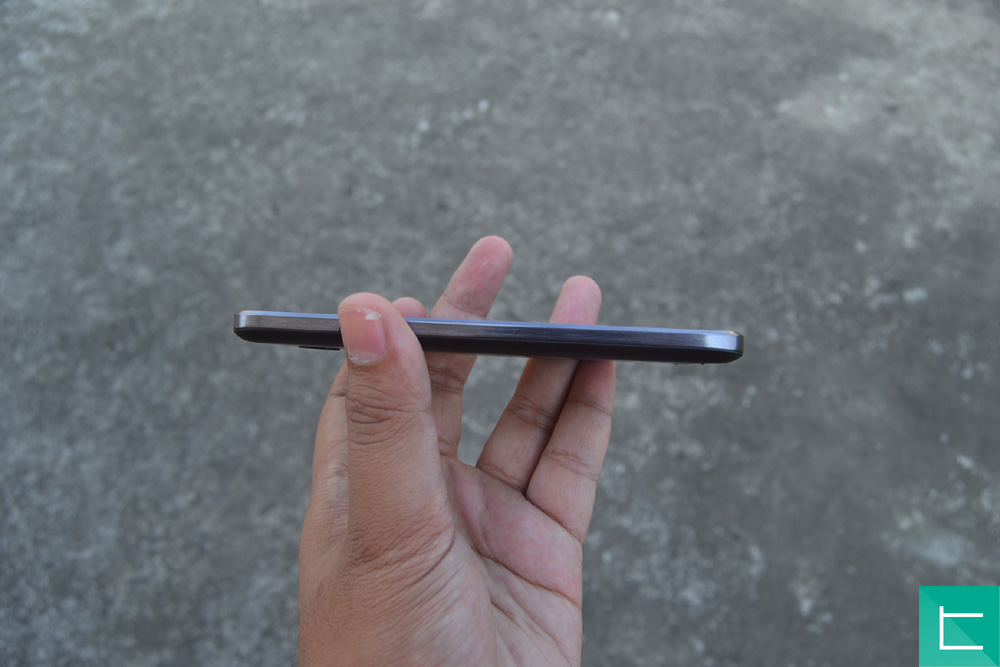 A welcomed addition to the S3 is the notification LED. The utility of a notification LED is missed severely on most entry-mid range devices and it is great to see Walton adding this small piece of often undermined hardware for the consumer’s convenience.

The headphone jack is up top along with the micro USB port which supports USB On-The-Go (OTG). Around back, we have a very large speaker grill that spans most of the width of the device. The long grill in reality is more of an aesthetic touch as the actual speaker is not that long but is just a small portion of the grill. The speaker itself is plenty loud and for the most part, gets the job done.

Provided inside the box free of cost we have a flip cover. The cover has a cutout near the top to expose a portion of the display which generally shows the date and time. The cover is made of good quality materials and is not flimsy. The flip to unlock mechanism works really well too. For those looking for devices in this price bracket, additions like this are always welcome especially if they are made well and function without fail. As we are talking about add-ons, it must be noted that the headphones provided with the device are built very nicely and feel very good.

The Primo S3 has a 5 inch, 1280×720 HD IPS display with a pixel density of about 320 pixels per inch. The display is sharper than many of Walton’s other 5 inch smartphones’ and the good pixel density makes everything look nice and sharp. The high point of this display is its size and HD resolution. The large amount of real estate caters to those who like consuming media on their smartphones and the 720p display makes viewing HD content in full resolution possible. 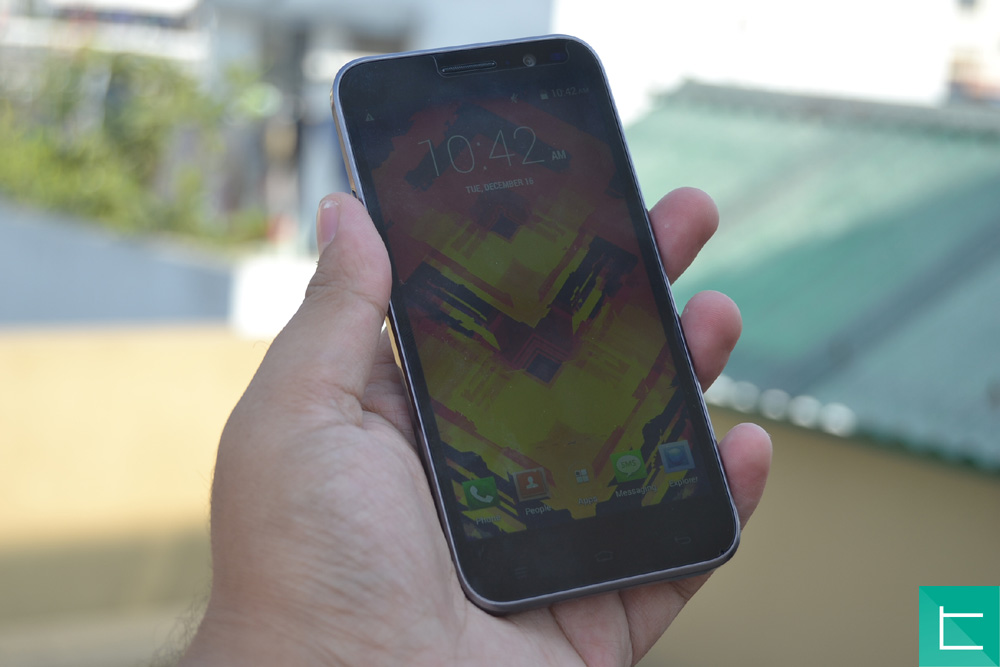 Colours look nice on the S3’s display and viewing angles too are pretty good. The display can get pretty bright so is viewable under direct sunlight, The lower end of the brightness scale too is good so you can comfortably read off of it in the dark.

The S3 runs Android 4.4.2 KitKat and as we have seen before, Walton ships the Primo S3 with a launcher. This time around it is the Cooee launcher. The launcher is not heavy or too intense so it does not affect the performance of the device. In fact, the great specifications and the light launcher make for a smooth and fast experience, more on that in the performance section. 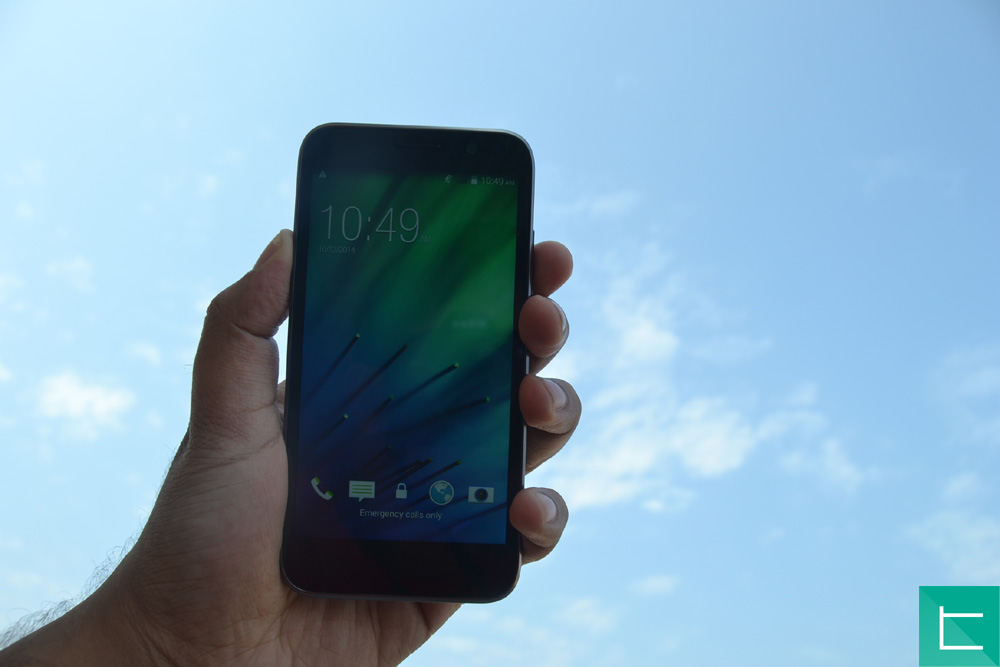 The software package is very bare bones and close to what we find on stock Android. The launcher does allow for some quick customization such as changing the theme and transition animations. The lockscreen theme can also be changed.

For the most part, Walton did a great job of providing customization options out of the box without sacrificing on anything else. Since the S3 is running on Android, it does not matter whether or not you like the launcher that ships with it. You can always download a good launcher for free from the Play Store and customise to your heart’s content. With Android, there are no barriers. 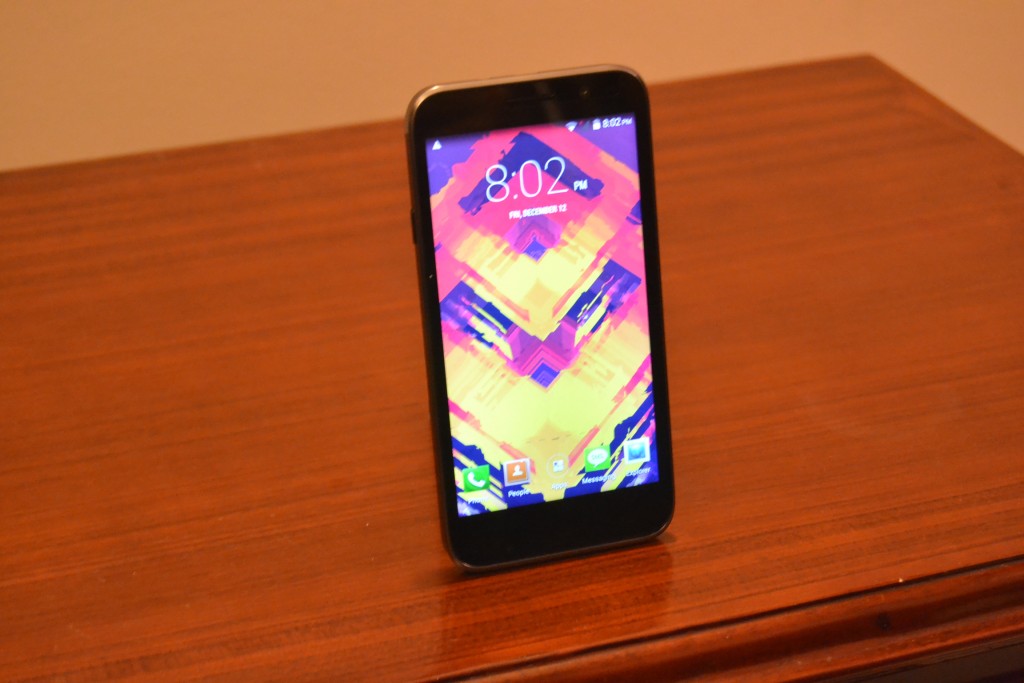 One last point we would like to bring up about the S3’s software, it has this unique feature where upon shaking the device the wallpaper changes automatically albeit with a cheesy tone. It is something we haven’t seen before and was a pleasant surprise when we first discovered it.

The Primo S3 shines in the performance section with benchmark applications placing it higher than well known flagships such as the HTC One M7, The fact that it performs at such a high level isn’t surprising at all given its internals. The 1.7 GHz octa core processor and the 2GB of RAM are more than enough to handle KitKat and the Mali-450 GPU is sufficient for the 720p display. With 16GB ROM and expandable storage, there should be no problem handling media on the device. In reality, it is actually pretty difficult to find a mid to high range device nowadays that runs Android poorly. Google optimised KitKat particularly to run smooth on lower specced devices hence performance does not suffer.

Gaming on the S3 is great, we tried out a bunch of games with varying demands and the Primo S3 went through them with ease. Even high end gaming did not hinder the S3. To put things to perspective, think of last year’s flagship devices and their performance, the S3 is a cut above those so judging performance becomes less of a chore. 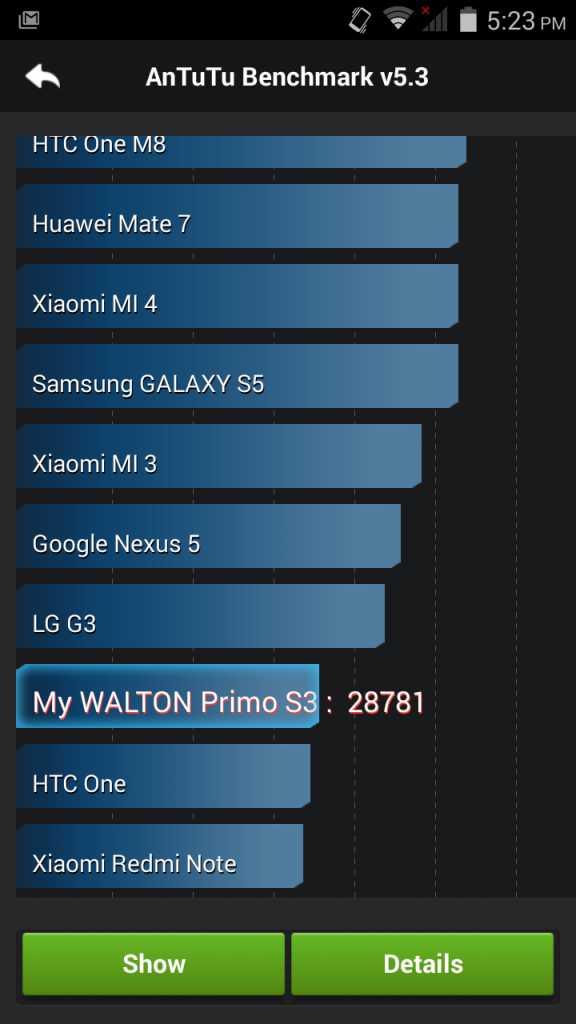 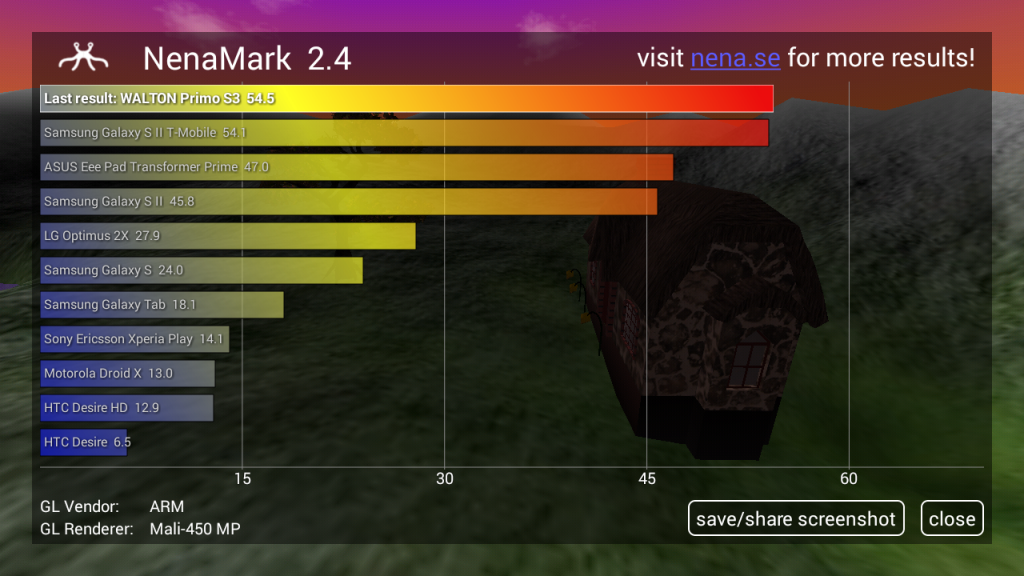 Switching through apps was a breeze too as the software suite on the S3 is light and near stock. Going through the user interface, there were no noticeable lags or stutters and everything overall was smooth. 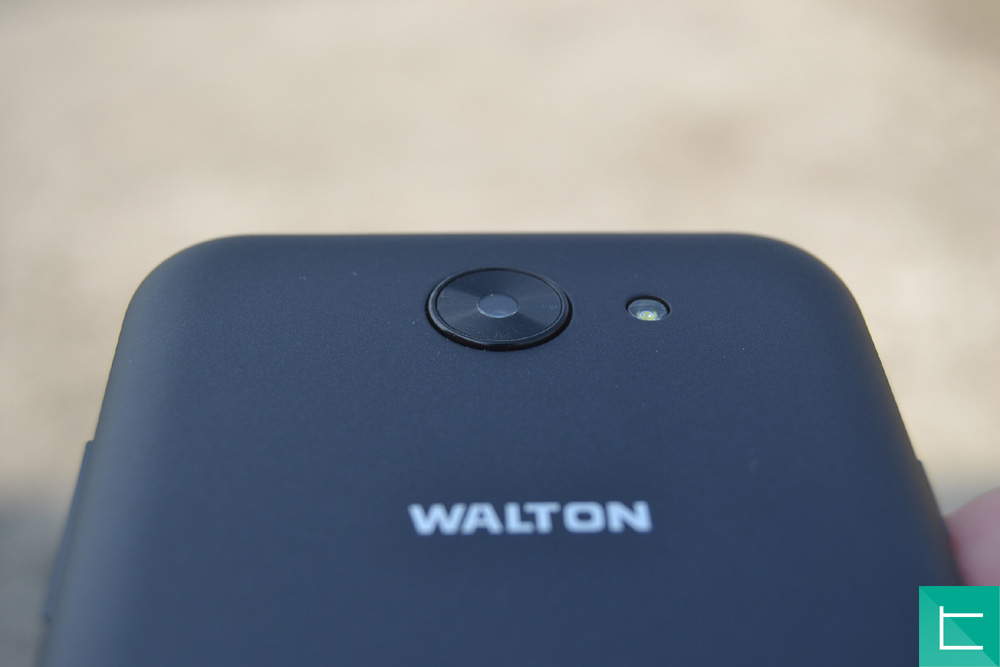 The camera on the S3 was great. The 8 megapixel BSI sensor on the back produced above average quality photos in both daylight and low light scenarios. Although it states the camera is an 8 megapixel unit, our benchmark tests showed that it is infact a 13 megapixel unit. This again is backed by a setting in the camera which allows for 13 megapixel shots.We initially thought the images turned out mediocre but it turns out that the preview you see in the viewfinder is not close to the actual captured image. Going into the gallery clearly shows the images captured are of a better quality than the preview. We don’t know the reason behind this but the good thing is that images look nice.

The user interface is similar to what we have seen on most other Walton devices, clean and minimalistic. The camera is quick to snap photos and has a wide range of modes and features. Walton toyed with some new things on the S3 and added features like voice and gesture capture. The voice capture works flawlessly in less noisy environments and may require some more prompting outdoors but most times it works just as advertised. The gesture capture is more of a hit or miss. Another feature that worked well was motion tracking. On a windy day, the camera was able to keep up with the moving subject and captured it without any blur.

Overall, the camera experience was great and exceeded our expectations in many fields. 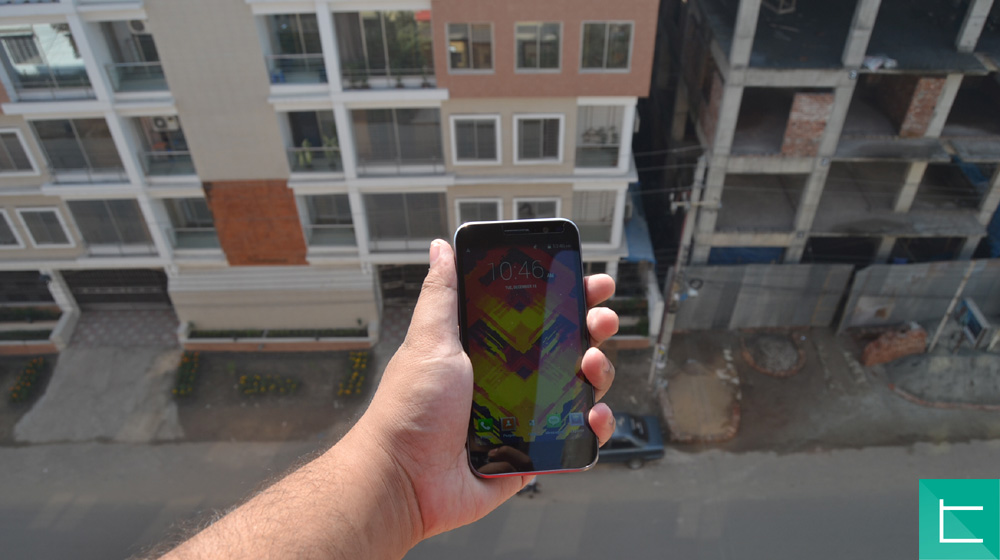 The Primo S3 is one hell of a smartphone. It combines price and features to make up the optimum package. The design is great and so is the software suite. All essentials such as a good display, camera and performance are duly met by the S3. The size and addition of a free flip cover sum up to offer a very compelling buy. Hence we would recommend the Walton Primo S3 to those looking for something more than an entry or mid-range smartphone at an affordable price. 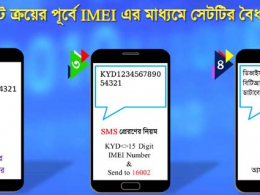