The Android tablet market is lacklustre, especially when you consider anything bigger than 8 inches. At that size only Samsung has any decent offering that validates purchase but those are pricey and not ideal for many buyers. The 10 inch form factor was never my personal favourite , I always preferred the more compact 7 Inch tablets. With the Walpad 10X, Walton attempted to bring to consumers specifications not found under the $300 price point coupled with great build quality. SO without wasting any more time, let’s get into the review! 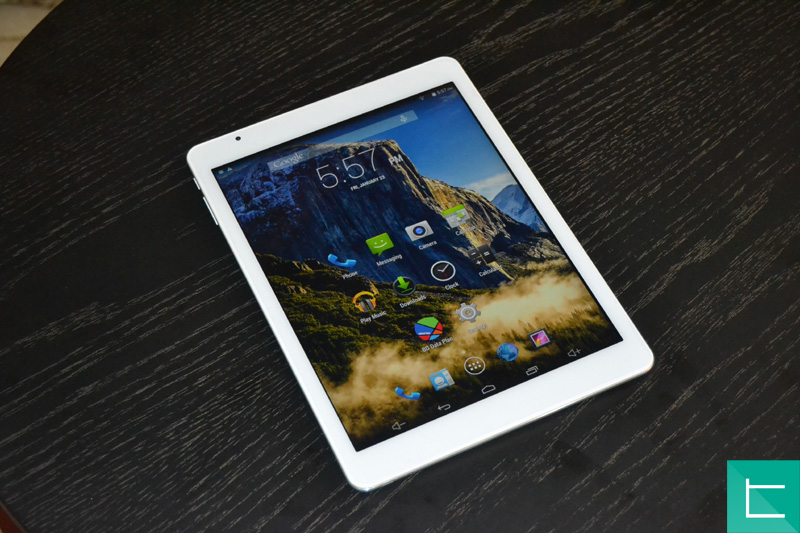 This is arguably the strongest point of the Walpad 10X. The tablet has a sleek 7.8mm thick aluminum body with a finish similar to the one you will find on Apple’s iPads. The attention to detail on the tablet astonished me quite a bit. All the ports and the speaker grill have been cleanly machined along with the smooth’ shiny chamfer that goes all the way around the device and even stretches along the small band of plastic. The plastic band is there for better antennae reception and does not affect the appeal of the tablet. From afar, one could fool the untrained eye to believe the Walpad 10X is an IPad which goes to show how great the build quality is. Walton even made sure that the power and volume buttons are solid and clicky, something we have complained about in the past about other Walton devices. The bezels on either side (in portrait orientation) are nice and slim for tablet standards, giving the user enough space to easily hold the device. The front of the device is protected with Corning’s Gorilla Glass but just in case, the Walpad 10X ships with a screen protector. Speaking of what’s in the box, the 10X also comes with a USB OTG cable which is just fantastic for anyone looking to integrate USB accessories. 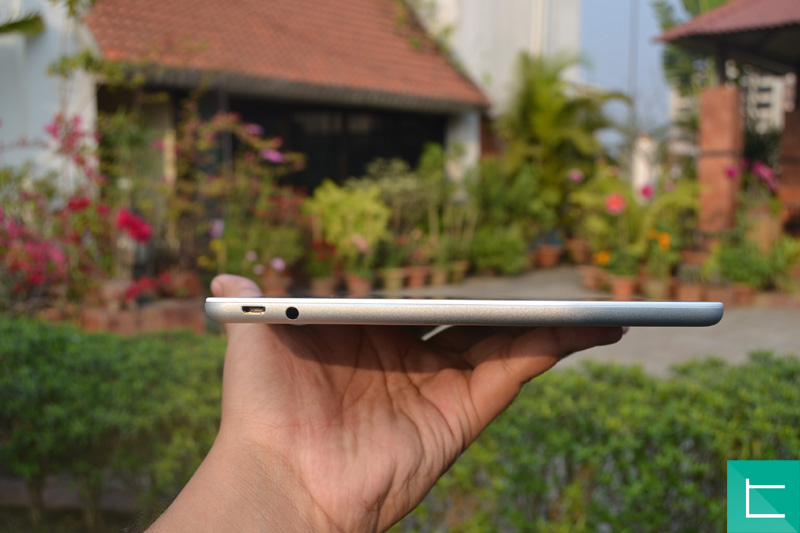 The design is uni body so no removable back here. The rear is one large piece of aluminium that can get a tad bit slippery but the aesthetic appeal makes up for it. All the usual ports have been cut out in the metal body including those for micro SD and a SIM card which supports 3G. The ports do not have a flap or cover of any sorts but that isn’t a bad thing. 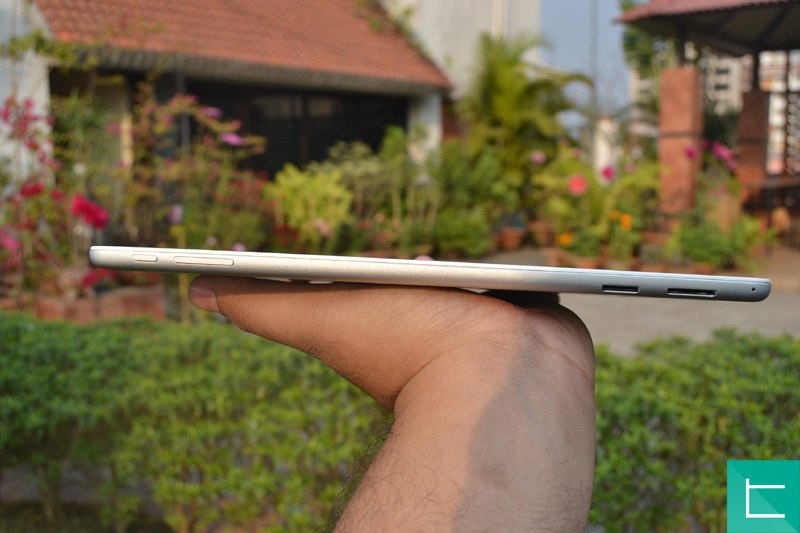 Two speakers grills have been cut into the back of the device and sound plenty loud. To the top left we have the nice and responsive power and volume keys and to the bottom left we have the card slots and a mic. 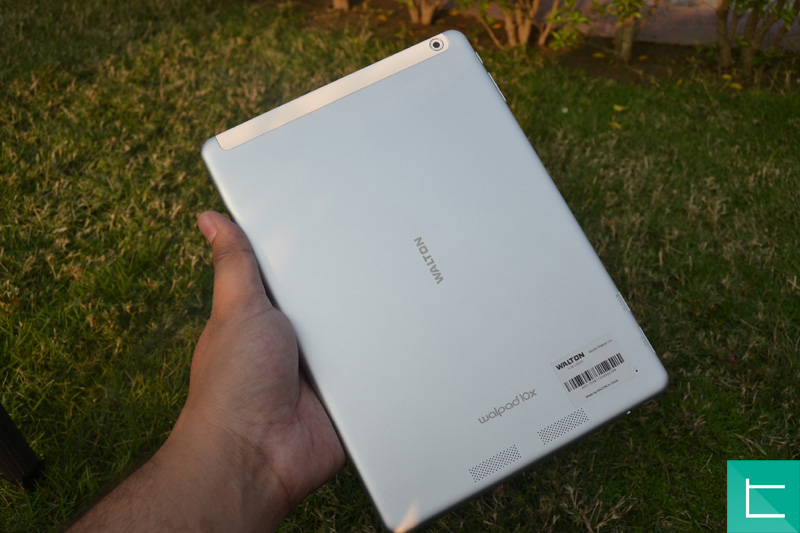 The right side is bare with no ports or cutouts and the bottom left houses the headphone jack and micro USB port. The 13 megapixel camera module is found on the plastic antenna band and is encircled by which ring of chrome like plastic which in our opinion looks a bit cheap when compared to the rest of the device. The front of the tablet is barren with only a front facing camera as we have no capacitive keys and strangely no light or proximity sensors meaning no adaptive brightness. Coming off the Primos S3, we really missed the presence of a notification LED.

The 10 inch display was a big surprise for us. Walton is marketing the Walpad 10X saying that it has a Retina Display, similar to Apple’s devices. What a Retina Display in essence means that the pixel density is above 300 pixels per inch (320 ppi for the Walpad 10X). The resolution of the display is 2048 X 1536 which is somewhere in between Full HD (1080p) and Quad HD (1440p or 2k). Given that tablets in general are held farther away from the eyes than smartphones, the Walpad 10X’s display looks really nice. Images and text look sharp and crisp and colours too look great. 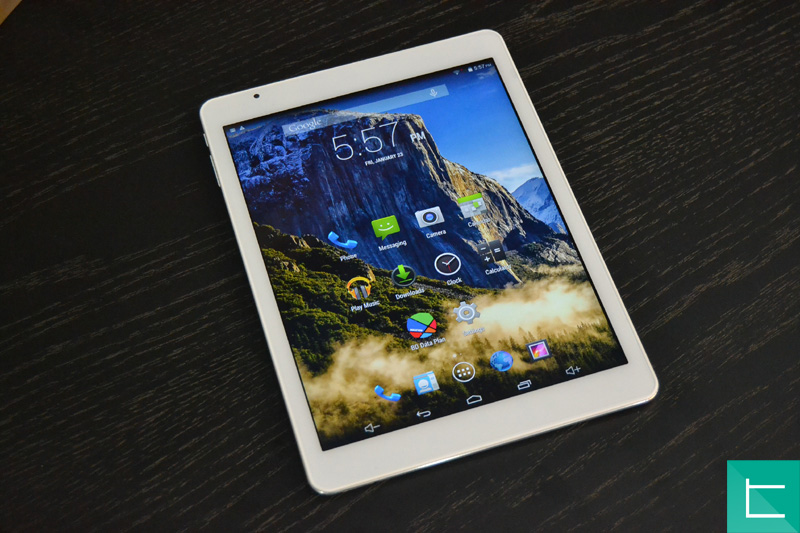 The screen can get very bright which makes it ideal for use outdoors but it’s lowest brightness setting is slightly higher than the preferred level for reading in the dark. Viewing angles on the tablet are great as well although the screen tends to take on a slight reddish tone when viewed from a steep angle. Aside from the resolution, the large size of the display is very appealing. Tablets are ideal for consuming media hence reading articles or watching YouTube videos on the 10X feels awesome. The 4:3 aspect ratio in my opinion is not ideal as it leaves big black bezels whenever you watch a video in the 16:9 standard which most videos are published in. What the size is really great for is playing multiplayer board games like Monopoly or using drawing applications which require a large canvas.

The 10X runs on Android 4.4.2 Kitkat with a launcher named Launcher 3 on top. The software on the 10X is the closest to stock Android that we have seen on any Walton device. Hence everything runs nice and smooth and you do not have to deal with any unsightly skins or app icons. 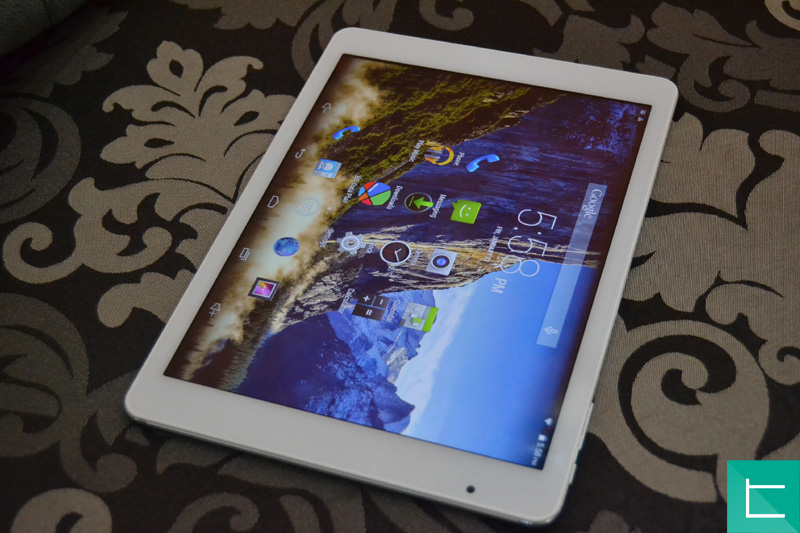 There is one noticeable change in the user interface and that is the addition of volume up and down software keys next to the standard back, home and recent apps buttons. I initially did not think much of it but with time, the software keys turned out to be a huge bonus and I almost never used the hardware buttons again. This is the type of UI we hope to see from Walton in future devices because Vanilla Android is just awesome and the implementation in the 10X works like a charm.

The Walpad 10X packs an octa core 1.7GHz processor along with 2GB of Ram, 16GB of on board storage and a Mali 450GPU. The internals are more than capable of providing a smooth user experience and supports most high end games without any issues. Overheating is not a factor here either incase you were wondering as the tablet gets lukewarm at best. 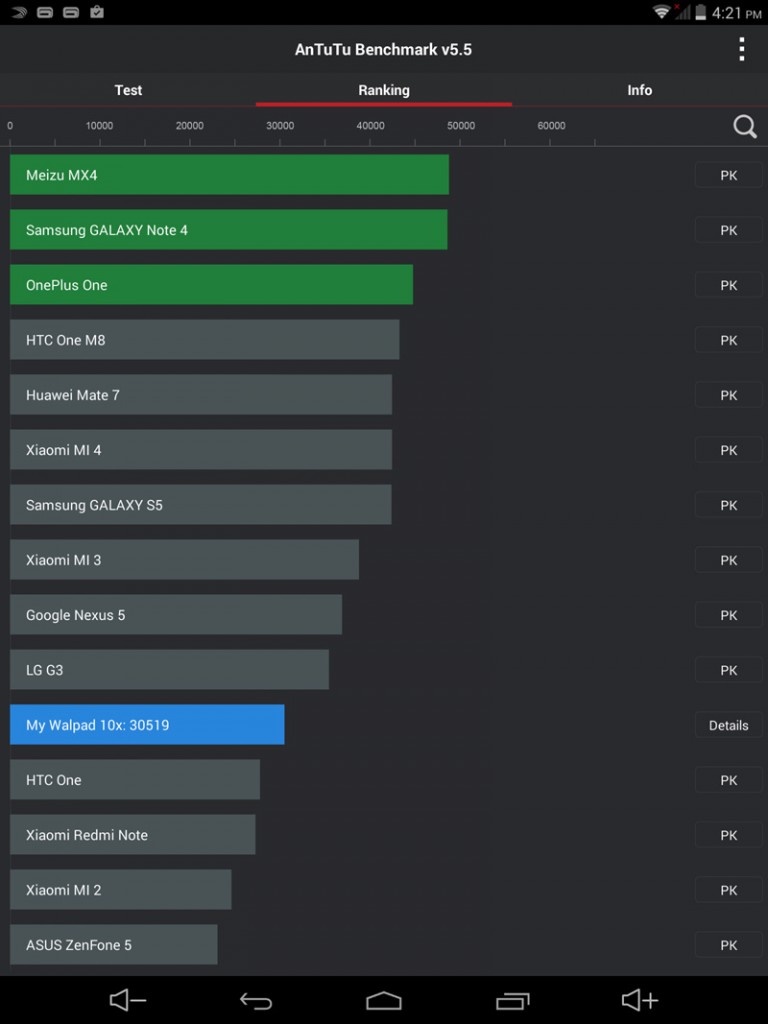 Going through the OS and quickly switching between applications is a pain free process with no noticeable lags to hinder the experience. The 10X scores well in benchmark applications, claiming a spot below the LG G3 and above the HTC One M7 on Antutu. 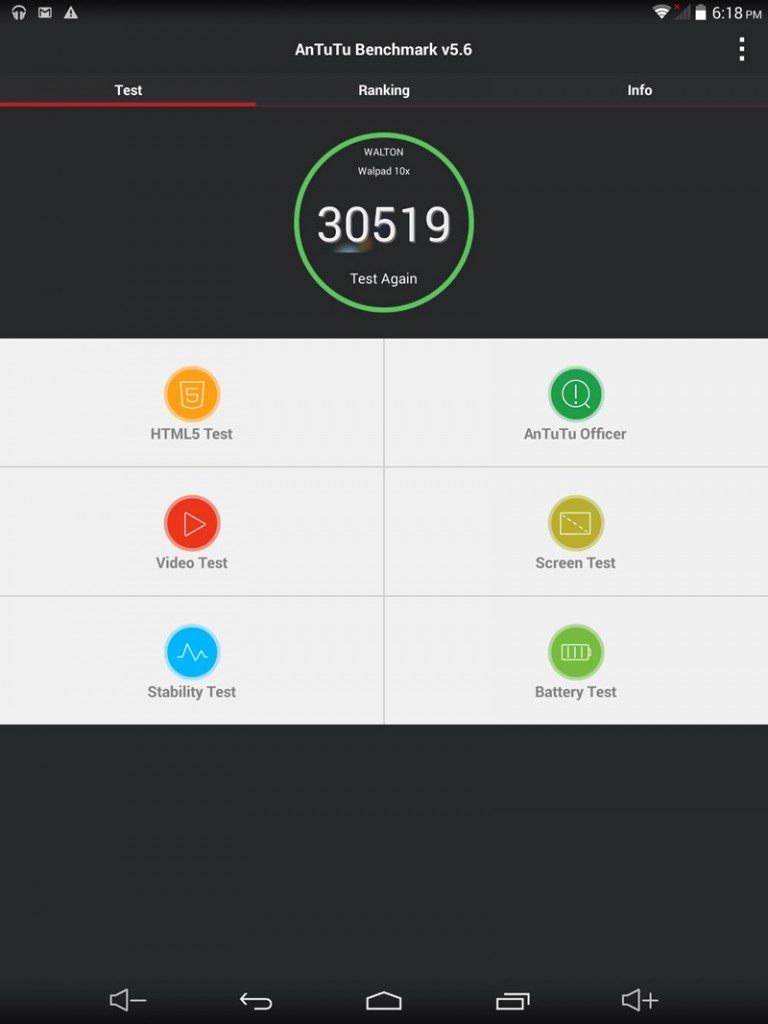 The tablet has a massive 8000 mAh battery which lasts almost two days and is really good in standby with a 1-3% battery loss overnight. Charging the device does take a bit of time but that is expected when dealing with such high capacities. Just for the sakes of reference, with WiFi on the whole time and the screen brightness set to about 50%, we got almost 9 hours of screen on time with 1% battery left. This stat was mind boggling but given that we lowered the brightness at night and the tablet does have a really high capacity, this makes sense. 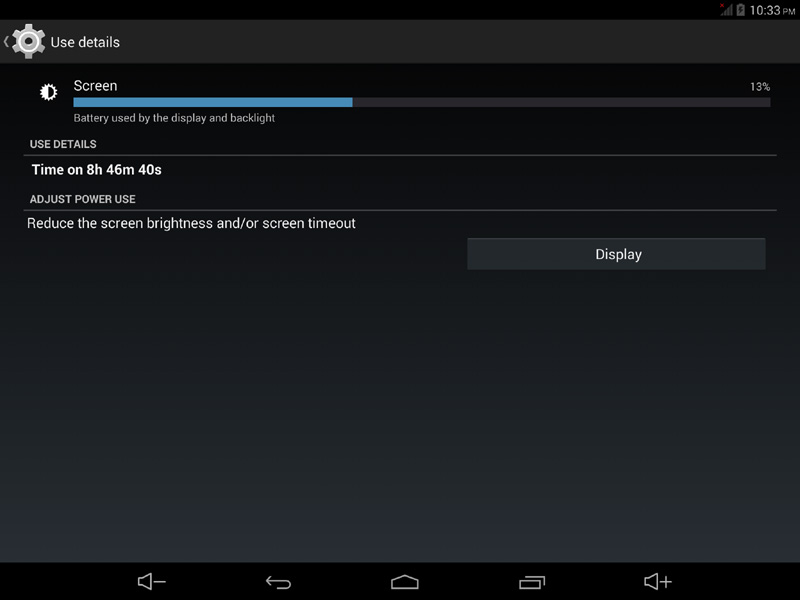 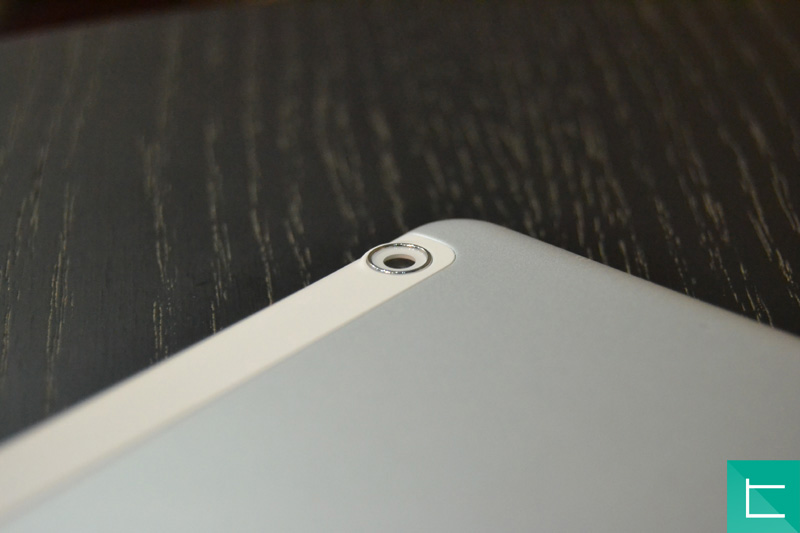 Disclaimer: It is not cool to use a tablet as your camera especially in public places like stadiums with other people trying to take pictures as well. It blocks out everyone’s view and is just bad public etiquette.

With that out of the way, we must say Walton did a good thing by putting a 13 megapixel sensor in the Walpad 10X.  When talking about tablets, certain features need to be judged based on how they are used due to a tablet’s size. Often times tablets are used for educational  purposes and a large part of that involves taking pictures of notes, graphs, diagrams etc all of which require a high resolution.

The 10 inch screen also acts as a massive viewfinder so locating and positioning your subject is easy. Handling something that big as a camera though is not the same story. You obviously can not think of taking pictures one handed but that isn’t a downside, just an inconvenience that comes with all tablets. The camera user interface is a standard Walton affair, simple and clean. Taking pictures and transitioning into the gallery are quickly done as usual but sometimes the camera takes a bit of time to focus onto objects.

As for quality, it is the same as the Primo S3’s. The rear shooter produces nice images in daylight and low light situations and the 2 megapixel front facer is great for selfies and video conferencing. 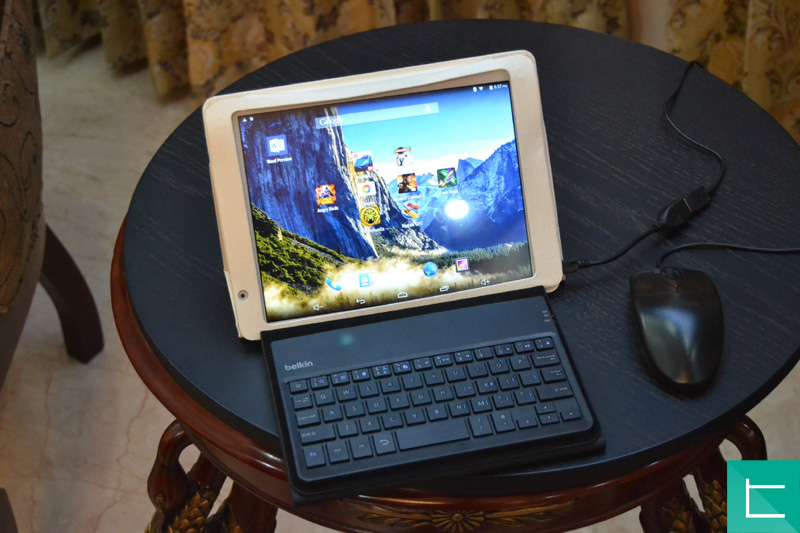 Looking at the spec sheet tells you the Walpad 10X is a great device but that’s only touching the tip of the iceberg. After using a 10 inch tablet, I have become a convert. Sure 7 inchers are more portable but there is a lot of added utility that a 10 inch tablet offers which validates buying a tablet. 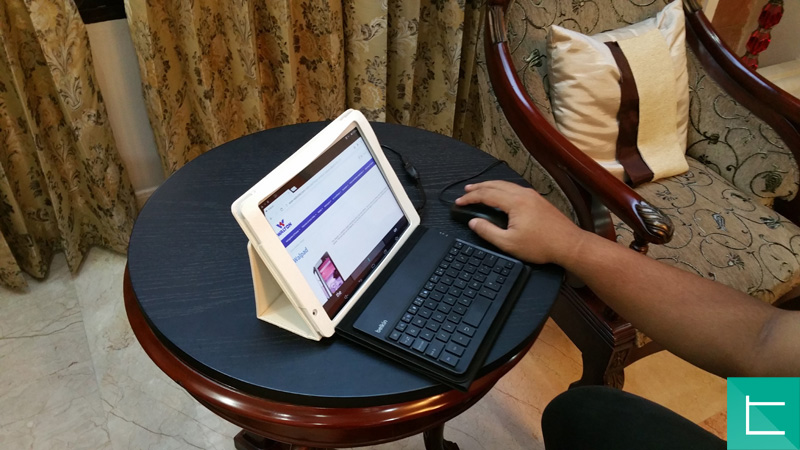 Media consumption is a dream on such a large screen. Whether you’re watching videos, reading articles or playing games, everything feels much more immersive. The high resolution “Retina” screen adds to the immersive experience too. With such a large screen you simply get to see more content so less scrolling and less page switching. Though the device is pretty large, it is very lightweight and so does not strain your hands.

All in all, the Walpad 10X exceeded our expectations and shines as Walton’s premium tablet offering. It includes almost everything a consumer looks for in a tablet and offers many features that similarly priced tablets don’t. 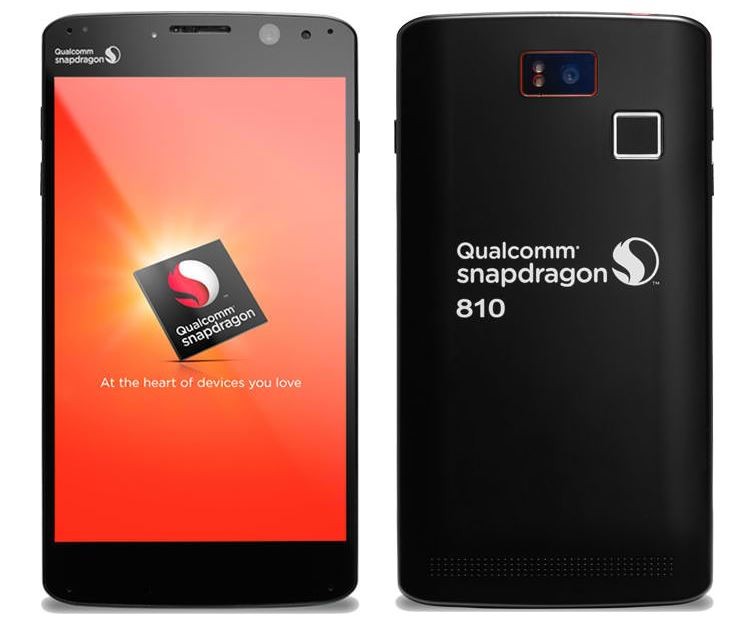 64 bit computing is very new in the smartphone world, infact i have more fingers than there are…
byAlavi Wahid
No comments
Total
1
Share
1
0