Virtual Reality is the new craze of the decade it appears and many have noted that it’s growth will change the way we as consumers view products, media and essentially the world around us. When Oculus first demonstrated their Virtual Reality headset, I was very very interested in trying it out. Unfortunately I never got the opportunity to do so and the world of VR was left to exist in my imagination. A week ago, I finally got to try the  at the Dubai Mall in Dubai, UAE and in this article I will be sharing my thoughts and opinions regarding the piece of technology and VR in general.

Before trying on the headset, I attempted to empty my head of all things I had read about VR on the Internet so that I could judge it like a person who had very little idea of VR.

Starting off with the actual VR content, it was a VR experience of the Wild Wadi Water Park in Dubai, a sort of promotion to haul in more visitors. The simulation showed real scenes of the park from the first person view of a visitor. The short demo quickly shifted between multiple areas in the park and displayed what it looks like owing through some of the rides.

Now for the VR experience itself. The first thing I noticed was the resolution. Since the screen is so close to the eyes, pixelation is present and quite noticeable sometimes. I also noticed that the real life video captured had some video stitching issues which made the experience seem less real for obvious reasons. Coming to the cool part now, looking around the VR world was something incredibly awesome. To put it in the simplest of terms, it’s like looking around the real world while wearing goggles of some sort. Head tracking was surprisingly good in my opinion and I did not feel motion sickness kick in at all.

As I was not able to control the direction in which I moved, it was not as immersive as a game would be. The whole demo essentially consisted of the user merely viewing the world from the perspective any regular visitor would view it in.

After my short demo, I was left with a lot of thoughts. The first thing to hit my head was that I could actually avail this technology today and use the Gear VR with my smartphone at home to really get a good idea about this technology. The second thought that hit me was regarding the price. At about $200, the Gear VR is not an affordable accessory and I ultimately ended up not purchasing the product. As fun as my little adventure was, VR is still an unproven platform with very little content to back it up at the moment. Also, when (and if) VR gets mainstream, the price of such accessories would decrease significantly. The quality of the products and media would also increase too.

For now, VR is a very neat yet inaccessible thing to most consumers. Google’s cardboard does offer a very cheap way to try the tech but it just is not as good or long term. The world of VR is something quite mind-blowing, it enables the consumption of media at a level so intimate that it almost feels real. A lot of things need to be polished first before it actually convinces me to make a purchase but for now given the interest shown by so many companies, VR seems to have a future in the world of tech. Until that day comes, I strongly urge all to try out VR because it is something truly different and unique from whatever we have seen in technology till date. 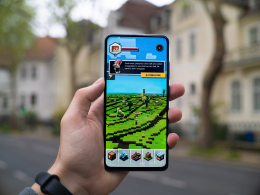 If you are reading this article, you are probably considering mobile gaming or are just bored of the…
byLatif Mozammel
No comments