You are Here: Home Latest Posts Tech Meet The Coolest Flip-Phone EVER

Remember the good old days before the whole touch screen smartphone fad started? A magical period in time when owning a flip-phone made you super awesome and flipping the device to answer calls made you feel like a complete boss? Yes friends, I am talking about a near extinct breed of mobile devices which at its peak was represented by the super sleep Motorola Razr line. In the modern day we can hardly argue for the benefits of a flip based device yet it is now that we see an entry into this vanishing genre that truly elevates it to the next level. 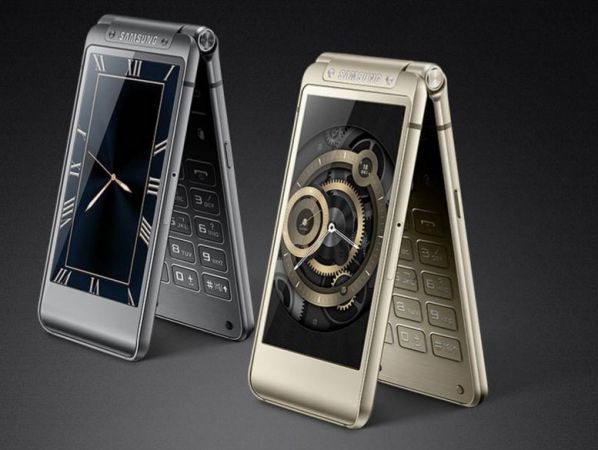 Introducing the Samsung W2016, a Frankenstein-esque concoction of a classic T-9 based flip phone and Samsung’s latest flagship devices. The W2016 name does not sound very appealing but boy is this device hot. The design is very similar to the current generation flagships from Samsung with similar speaker look and placement along with a similar camera arrange

ment. The similarities end there though, the entire body is crafted from aluminium, unlike the glass found on the current flagships, and also has a curved back. There are two 3.9 inch Super AMOLED displays with a resolution of 720 X 1280. Do not let the HD resolution fool you, at 3.9inches, the pixel density is still very high and will offer a very good experience, after all, Samsung does make the best mobile displays.

The premium build and dual displays are just half the story, inside, Samsung has packed the W2016 to its brim with specifications. Powering the device is a Samsung Exynos 7420 Octa-core processor (2.1GHz ARM Cortex A57 quad-cores +1.5GHz ARM Cortex A53 quad-cores), 3GB RAM, 64GB built in storage (the world should make 64GB standard), a 16MP rear camera and a 5MP front camera (possibly the same as the Note 5). The battery though is pretty tiny at only 2,000mAh and is a concerning point when you factor in two displays. On the software side we have Android 5.1 Lollipop with Tizen of course. It is disappointing to not see Marshmallow but we really did not expect that from Samsung at this point.

Now for the sad news. As far as we know, this device is exclusive to China. We have no information regarding availability, release or price, although we do not expect it to be cheap. What we do know is that the W2016 is a good looking package with specifications to rival modern day flagship smartphones. All that remains now is to wait and see how Samsung handles this device. The irony of this situation is that we get to see one of the best looking (on paper at least) flip-phones arrive at a time when they are nearly extinct. What’s interesting though is that there is apparently still a market for such a device. We would really love to get our hands on one of these and try to relive the glory days but until then we just have to wait.

Overclocking is basically making a CPU, GPU or less commonly RAM run faster than its factory setting. This…
byAnoronyo Neogi
5 shares
5
0
0
One comment