So basically after Twitter ditched Twitpic by having their own photo-feature embedded in the tweet box, Noah Everett,founder of Twitpic, recently released his new social network which is pretty much similar to Twitter. An act of revenge ? I dont think so.

Heello was announced last year in August and finally it is open to all the users.  One would say, its a total clone but there are some differences with it.

What I like about Heello is that once you post the pictures it shows the review of the pic on which you click to enlarge it whereas in Twitter you can only see the link and have to click the next button to see the preview. Well, at least in Heello it saves one step of clicking ! Check the picture below ! 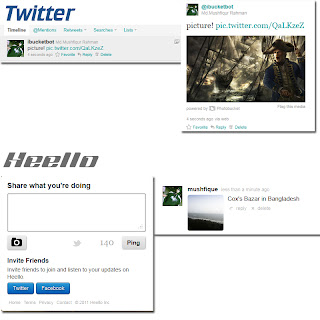 On the other hand, you can also have your pings get tweeted in Twitter at the same time ! You just have to click the small birdy icon in the middle of the camera and the ping button.

Now, according to the users, what makes Heello addictive in their release is the ‘Whats Happening’ Tab. In this tab, you can see all the pings of the people pouring down like water in each second. Interesting I must say. But once I started using it I knew that this feature would not last long due to the influx of the users in this site and  I was right ! As their users kept increasing and increasing, the pings in the ‘Whats Happening’ tab started pouring down like a waterfall, and as I predicted, it was temporarily disabled. The server wasn’t able to cope with the pressure obviously!

Noah Everett did an excellent job in opening this new social network but if he wishes to compete with twitter I doubt he would last. You never know what happens in the tech and the cyber space. One day you might even see Google buying Heello to integrate it with Google Plus ( just a thought )

Why wait ? Start Pinging and Listening!

As expected, Samsung finally unveiled the Galaxy S4 Mini which actually does not seem like a mini version…
byMushfiqur
8 shares
8
0
0
One comment

French Manufacturer Archos is all set to release two new devices at CES this year. The 50 Diamond…
byMehnaz Tabassum
No comments
Total
0
Share
0
0