You are Here: Home Latest Posts Tech The Acer C7: New Chromebook at only $199

It hasn’t been even a month since Google partnered with Samsung and announced their new Chromebook. Yet here we are again witnessing another Chromebook announcement, and this time Google has partnered with Acer. The Acer C7 is by far the cheapest Chromebook with a price tag of only $199.

Folks who aren’t familiar with the functionality of a Chromebook might be excited to find a laptop priced below $200. It’s not what you think it is! In simple words, without a Google account there is no way you can run a Chromebook but obviously, it would just take seconds to create one. The Chromebook runs on Google’s Chrome operating system and you have to rely on Google products such a Chrome Browser, Drive, Gmail, Picasa etc. You do not need to be online to use a Chromebook all the time because you can have your video, documents and music downloaded at your local SSD. However, the sole reason of owning a Chromebook will be if you totally devote yourself to the cyberspace.

This announcement of the Acer C7 stated earlier wasn’t much of a surprise because Google had earlier stated that they would be working with 5 different companies to bring out their products.

As the price tag is below $200, you shouldn’t expect the laptop to have a high end processor. The laptop is powered by a 1.1GHz Intel Celeron 847 processor and 2GB of memory which is good enough to give you a smooth experience. According to Google, it takes 18 seconds to boot up and high definition videos  run without a hitch.

The C7 has around 3.5 hours of battery life whereas the previous, Samsung Chromebook, has double the amount. The thing that sets the Acer C7 apart from the other Chromebooks is the storage capacity. Acer bumped up the storage capacity to about 320 GB and even more, you get a 100GB of free storage in Google Drive for two years! 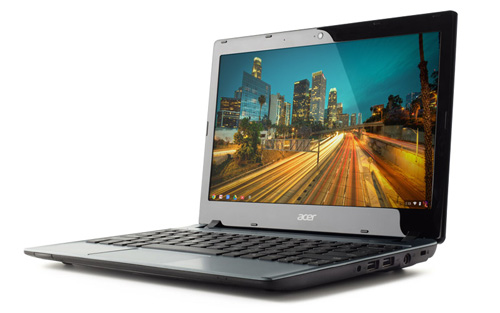 Thoughts about the Acer C7

If you, as stated earlier, work full time in the cyberspace then of course the Acer C7 is a must buy at this price. If you are a hardcore gamer or a graphics designer, then I suggest you to buy the Nexus 7 instead at the same price. Then again, if you are a collector of Google products, there’s no one stopping you to put the Acer C7 in your collection!

Techetron has teamed up with Dragonblogger and The-Best-Web-Hosting-Service.com to host an iPad Air giveaway and this is your perfect chance…
byMushfiqur
No comments

The announcement of Xiaomi Mi 5 was timely and strategically perfect! With both LG and Samsung unveiling their…
byMushfiqur
2 comments

Alongside the Nokia Lumia 920 and 820, there’s another Lumia on the horizon and it’s expected catch everyone’s…
byAlavi Wahid
6 comments
Total
2
Share
2
0