After most people (including myself) were slightly disappointed with iPhone 5 release, we failed to notice Apple’s other new generation gadget, the iPod Nano 7th Gen. The Apple iPod has been a staple in any true music fans life, well for those who can afford one. Apple products have always and will always be pricey, but the elegance in design and high-tech features like no other constantly makes up for the big chunk of change missing from our bank accounts. The new iPod is a perfect example of why we love Apple so much and why no other brand can even compare.

Moving away from the failed 6th generation iPod Nano square look, the new nano is sort of a return to form for the iPod. Not a complete return to form, because no one wants to go back to carrying a think brick-like device around. But it’s longer screen and rectangular shape is a friendly familiar face.

The first thing anyone ever says about “nanos” is that they’re light and this one definitely gives us something to talk about in that department. It weighs in at a feather-like 31 grams. But they still managed to fit in a family favourite home button. Yay!

It sure is a pretty little thing, but what can the iPod Nano do? If you’re a Nano veteran, you’ll find things are more efficient in terms of menu but still keeping the basic principles of the iPod Nano.

You’ve got your nine main icons this time and you’ll find the classic Apple music and video player amongst them. But music isn’t all this baby is capable of. Oh no, no. There’s a build in Nike + function for all the “trackstars”, which definitely come in good use and even allows you to Bluetooth connect with your heart rate monitor.Snazzy!

Photo viewing is a big part of iPod for some reason. No one knows why, but we all like to load our favourite ones and flick through them when the day gets tough. You’ll find all the old favourites included, like Live Radio, Games and the Voice Memo recorder. 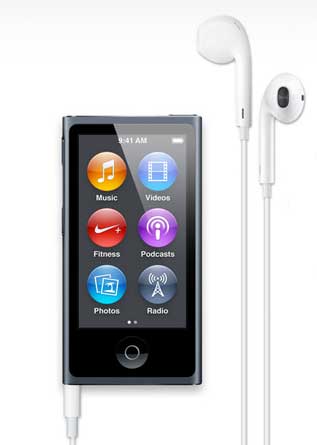 Up to scratch as always. And by up to scratch, I mean Apple invented the scratch. Apple’s sound devices are what every other brand strives to match. And it comes with the brand new Apple EarPods that everyone is dying to get their hands on. Apple’s sound is unbeatable and choosing a iPod Nano rather than a Touch really isn’t sacrificing anything in terms of sound quality. I promise!

If shiny, tiny, good looking gadgets are your thing, the new Apple 7th generation iPod Nano should definitely be on your Christmas wishlist. If you’re looking for something to play your tunes through and are serious about quality, this one’s for you too. If you’re on a budget and just want something to use now and then, go for something that doesn’t cost $149. But if you’ve got the bucks there’s nothing more rewarding than owning a sexy music playing device like the new iPod Nano, except maybe owning the new iPod Touch.

Author
Dmitri Blackthorn
Dmitri Blackthorn - a software testing expert and technology blogger enthusiast. Dmitri studies online marketing, SEO, PHP and plans to launch his own software store. Check out his DRM Removal tool where you can convert any kind of files into iPod supported AAC and MP3's.

The president-elect Donald Trump has handed his old android phone over in exchange for a secured, encrypted device.…
byMahir Amer
No comments

The further technology advances, the more it permeates every aspect of life. Even those who enjoy nature find…
byMushfiqur
No comments
Total
1
Share
1
0